AR / Bentonville
Crystal Bridges Museum of American Art
"Crystals in Art: Ancient to Today"
October 12 – January 6
In Arkansas, where quartz crystal is the state mineral and digging it up is a tourist attraction, a museum named Crystal Bridges is the perfect place to display more than 75 engraved gems, figurines, and other objects that illuminate how crystal has been used for millennia by artists, healers, and leaders.

CA / Pomona
American Museum of Ceramic Art
"Julie Green: Flown Blue"
to February 23
Julie Green turns the most ordinary objects – dishes – into extraordinary social commentary. This extensive exhibition of Green’s dinnerware-based art encompasses the Last Supper series, which memorializes the final meals of death-row inmates in blue images on more than 800 white plates; First Meal, a series depicting what ex-prisoners have chosen to eat following their exoneration; and An Embarrassment of Dishes, a deeply personal series based on the artist’s grandmother’s china.

CA / Sacramento
Crocker Art Museum
"Cool Clay: Recent Acquisitions of Contemporary Ceramics"
to July 19
The Crocker shows off some of the latest additions to its clay collection: leading-edge works from the last 60 years by makers such as Jun Kaneko, Rudy Autio, and Dirk Staschke.

CA / Walnut Creek
Bedford Gallery
"Off Menu: Contemporary Art About Food"
October 6 – December 15
In this banquet of more than 100 sculptures, textiles, ceramics, photographs, and paintings, artists use food as an entree to themes ranging from family to famine. “Les Diners de Gala,” a traveling show of 12 prints by Salvador Dalí, enhances the culinary theme. 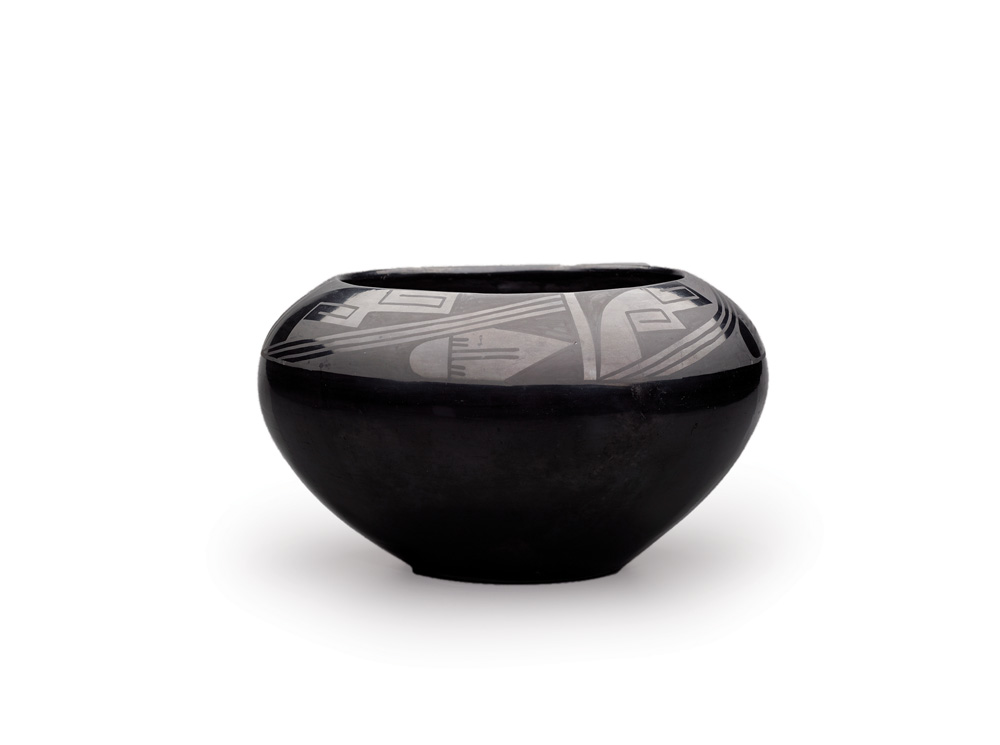 MA / Boston
Museum of Fine Arts, Boston
"Women Take the Floor"
to May 3, 2021
Not so long ago, art history textbooks made it seem as though women in art existed only as models, never as makers. The museum is devoting a whole level of one wing to correcting that notion. Seven galleries house more than 250 works by women working in traditional fine art and craft mediums, organized around themes such as “The Female Gaze: Women Depicting Women,” “Women and Abstraction at Midcentury,” and “Beyond the Loom: Fiber as Sculpture.”

MD / Baltimore
Baltimore Museum of Art
"Hitching Their Dreams to Untamed Stars: Joyce J. Scott & Elizabeth Talford Scott"
to December 1
Fiber artist Elizabeth Talford Scott (1916 – 2011) passed on more than artistic talent to her daughter, Joyce J. Scott. She also handed down a firm belief in the power and worth of art, a family inheritance from makers creating under the harsh conditions of slavery, sharecropping, migration, and Jim Crow. The nine works on view here are a testament to mother and daughter’s shared values, spirit, heritage, and legacy. 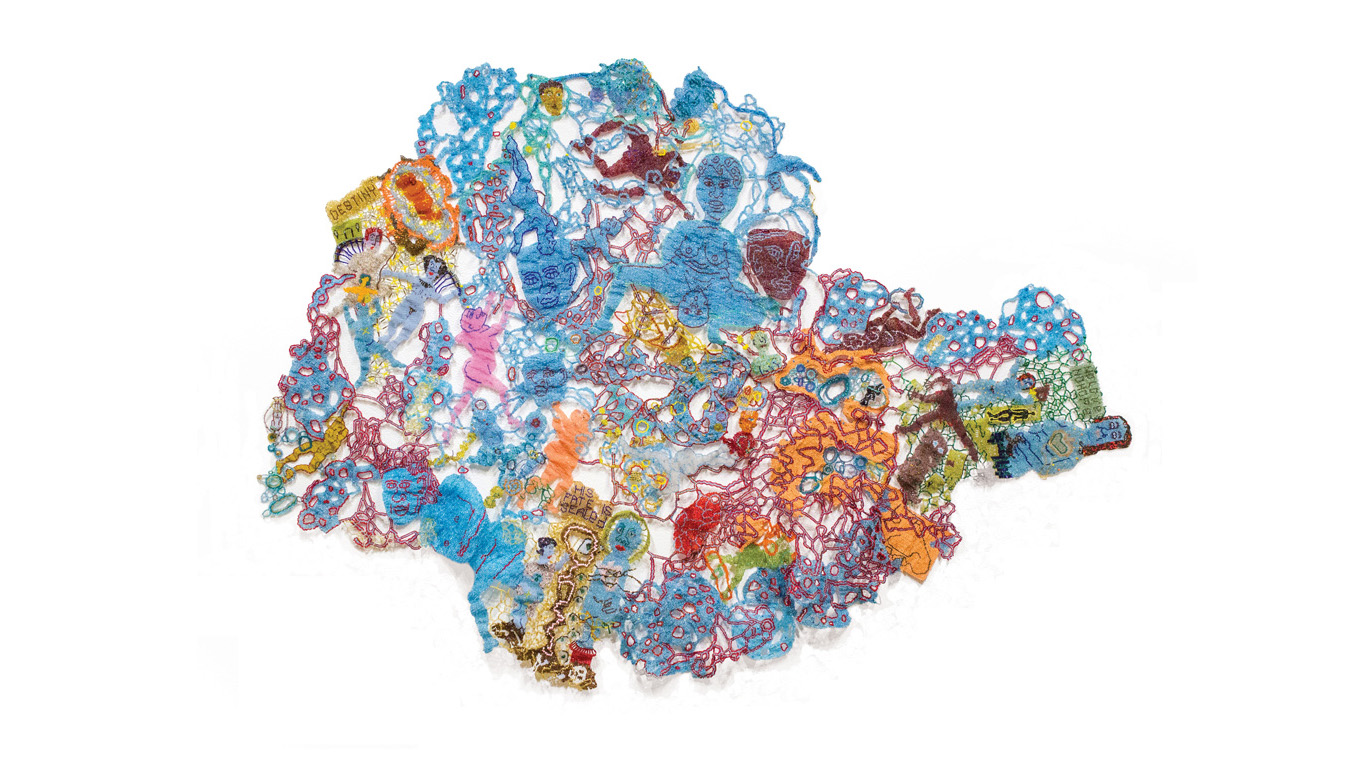 OR / Portland
Portland Art Museum
"Hank Willis Thomas: All Things Being Equal…"
October 12 – January 12
Hank Willis Thomas devotes his art to decoding the often-overlooked messages in the cultural imagery that bombards us. Quilts made of sports jerseys, for example, reveal similarities between “the buying and selling of bodies in slavery with the trading of bodies in sports” [“A Legacy Unceasing”]. His sculptures, video installations, photography, and other works are equally rooted in his deep concern for social justice; about 100 are on view here.

PA / Philadelphia
The Center for Art in Wood
"Making a Seat at the Table: Women Transform Woodworking"
October 4 – January 18
In a field that’s traditionally considered “a guy thing,” women have been carving their own niche. This survey of the skill and imagination women bring to woodworking comes in advance of a book by the same title, by co-curators Laura Mays and Deirdre Visser.

TN / Memphis
Metal Museum
"Master Metalsmith: Sarah Perkins"
October 6 – March 8
The versatile Sarah Perkins, whom the museum named this year’s Master Metalsmith, is renowned as an enamelist with an affinity for lidded containers and their intimate mysteries: No one knows what they hold except the person who put it there. On view here is a selection of these hand-formed vessels and other work from her 30-year career.

WA / Tacoma
Museum of Glass
"Richard Marquis: Keepers"
to November 2020
For this survey, guest curator Vicki Halper chose work from Richard Marquis’ own archive of “keepers” – pieces he hung onto throughout his 50 years of creating exquisitely made, innovative, and sometimes flat-out funny glass objects. Also on view are some of his less-often-displayed prints and works in clay.

TX / San Antonio
McNay Art Museum
"Picasso to Hockney: Modern Art on Stage"
October 17 – December 29
More than 100 scenic and costume designs from the museum’s Tobin Collection of Theatre Arts show what happens when fine artists mix it up with writers, musicians, and dancers to envision, then bring to life, onstage worlds. (Learn more about the collection.)