Yvonne Mouser, 36, is an artist, builder, and designer in Oakland, California, whose work spans furniture design, fine art, and events. A graduate of California College of the Arts, Mouser works both independently and with a diverse group of collaborators. In addition to running her main business, her eponymous design studio, she cofounded YMSF, an ongoing jewelry collaboration with Stella Fluorescent studio’s Tiersa Nureyev; New Factory, the design studio and workshop she ran with industrial designer Adam Reineck; and Thought for Food, where she focused on the artifacts and experiences of eating.

Mouser sat down in her studio with Sarah Schultz to talk about the inspiration behind her creations; the interplay of craft, design, and art; and whether the concreteness of “craft thinking” could aid designers and artists.

I saw your work in Philadelphia last fall in “Making a Seat at the Table: Women Transform Woodworking” at the Center for Art in Wood. It included a series of brooms, appropriately titled Curb Broom, Curved Corner Broom, Shovel Broom, and some of your bucket stools. What struck me when I encountered them was how they married a strong design sensibility with an incredible material sensibility. Do you consider craft and design to be two separate fields, or how do you see the relationship between them?
I do think of them as separate, but overlapping or interlocking. Craft is more about “the how” of an object. And design is more about “the what” or the idea of an object. Sometimes I look at traditional craft and I feel like it’s missing design. It feels repetitive or historical; it’s “in the tradition of.” For me, design is about the simplification of the idea, so that it becomes more pure or clear or light. And also, with design, you think, how can you distill the idea or the intention? 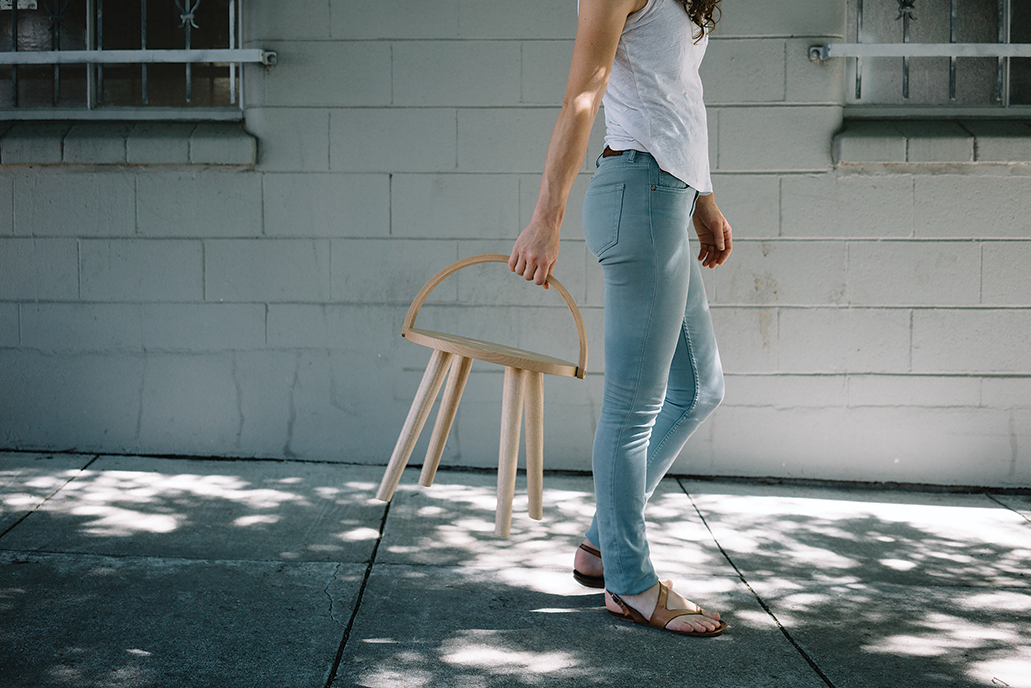 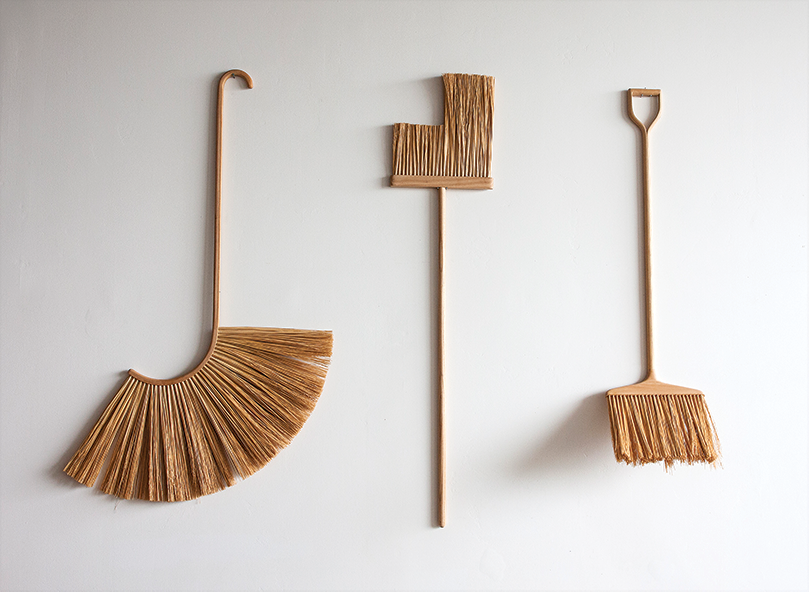 ↑ The Step / Bucket Stool is inspired by the utility of five-gallon buckets.
Photo: courtesy of Yvonne Mouser

And do you not think about that when you think about being a craftsperson?
No, I think it’s there as well because you have to understand material. If I was really going to simplify, it would be: Craft involves a lot more technique, knowledge of material, actual hand practice. And then design is a little bit more thinking about the idea of the object, how it will function, or what it means. That’s the way I think about what I do; it’s both of those things.

You mentioned hand practice. How does handwork inform design?
Well, for me, every time I make something, it’s inspiring the next thing. I’m very motivated by materials. I started making brooms for a couple of reasons: One of them was I just loved the bristle, and I was excited to play around with that.

Talk to me about brooms. Like you, I am drawn to the texture of the bristles and the utility of brooms, and I appreciate well-made things. I was both delighted and curious by their unusual shapes and specific uses. And of course, the installation and the context within a gallery invites you to read them like sculpture. Where did the idea come from?
Years ago, I was visiting my grandparents. My grandmother was dying in the house, and we were there with each other. I was cleaning their kitchen, and I remember wishing I had a broom that went under the kickplate of the cabinets in the kitchen because there were cobwebs everywhere.That’s how it started: in that moment, wishing I had this very specific tool, imagining that object. I started playing around with how I would make that. I was making these tiny little hand brooms with horsehair. The very first one I made was a sketch of an idea of a broom; it was all wood: a little wood block with tiny wood dowels, which I fringed. 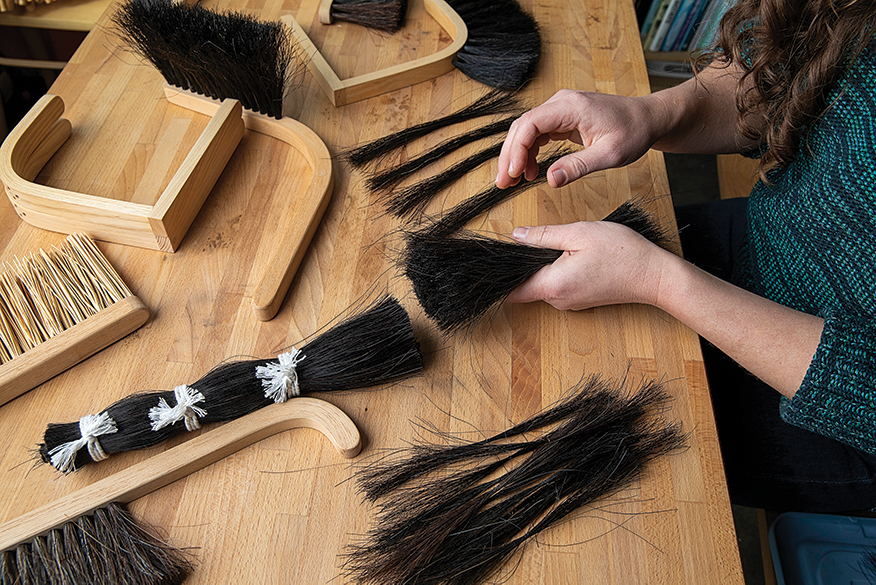 ↑ Mouser bundles horsehair for Superstition Broom, named for the belief that it’s bad luck to rest a broom on its bristles.
Photo: Mark Tuschman

It was literally the idea of a broom?
Yeah, that was just a quick, one-day exercise I did. And then I started playing around with these little hand brooms, and then I was thinking about what’s the shape of it, how does it fit? At the time, I was reading about superstitions – there are a lot of superstitions around brooms, for good luck and bad luck and how you hang them and when you give them. And there was one about never resting a broom on its bristles, which makes sense, because you ruin the broom; the bristles become bent. And so that led to the design of the little hand broom that hangs off of a table or shelf.

"For me, design is about the simplification of the idea, so that it becomes more pure or clear or light."
~ Yvonne Mouser

Where’d the idea for the bucket stool come from?
I was living in a house that was partially under construction, and we had the inevitable white, five-gallon bucket kicking around. Those are the perfect height for a seat. We had the lid, and we had the handle. I kind of loved that, and I thought, oh, maybe I could make something that’s more furniture-like. I made one for my sister for her wedding gift – a small step stool that had a handle. It was very chunky, and I wasn’t satisfied with that design. The second one had more of a basket handle. And then I made one that had a metal handle and a shaped seat. So I guess that would be an example of design process: I had the idea, I made the thing, and I continued to evolve both the craft and the design of the object by iterating it. And so different changes were made with how it goes together and the scale, the proportions. But it really just came from a plastic bucket I had in my living room.
[Laughs]

I love that story! It’s interesting to think about the different ways that design or art or craft can help us see the essence of things. Perhaps art, craft, and design are toolboxes that you can move in and out of, to pull from different ways of working to make what it is that you want to make.
I think that there are projects that are heavier in one category or the other; but they’re all there all the time, or at least the pieces that are most exciting, for me, involve all three. Sometimes there’ll be a piece of work that is amazingly well crafted, but the object itself doesn’t inspire the same awe. Design is still a part of the decisions made about how it goes together, but it’s possible there’s not the same artfulness in the idea of the object overall. 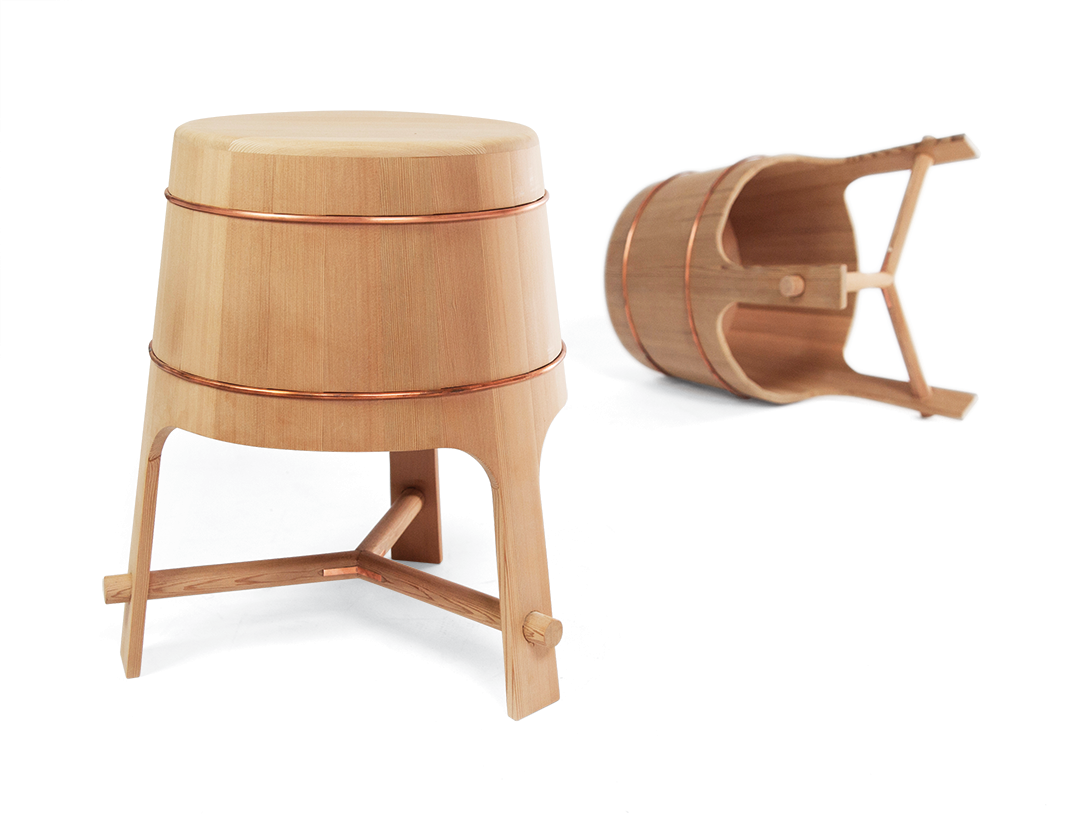 ← Inspired by sauna buckets, the stackable cedar Barrel Stools can be containers or seats.
Photo: courtesy of Yvonne Mouser

You’ve talked about how you feel free to move between mediums. Typically, when I think of craftspeople, I think of people committed to certain materials. Is it OK for craftspeople to move between mediums and perhaps not be masters of them? How important is mastery over medium, over material, to being a craftsperson? Or is there another way to think about what a craftsperson does?
That’s an interesting question, because part of what being a craftsperson is, is the time that it takes to have the skills to execute at a very high level. But the other part of it is the persistence and the follow-through of making something well. That is something I learned through becoming a woodworker: that attention to detail. I don’t think that I valued craft or even practiced that when I was first making sculpture, not in the same way. When you’re making a piece of furniture, and you mess up, you start over. That happens in art as well, but I think the attention to detail and accuracy of crafting something well is something that I learned through the practice of woodworking and furniture making.

Which leads me to my next question. Design thinking is a particular methodology; could you say there’s such a thing as craft thinking?
I think so.

"... from the dustpan that the street sweeper uses to the napkin holder at a restaurant. Just paying attention to the decisions behind how things are made is really fun for me."
~ Yvonne Mouser

And what might that be? How would craft thinking benefit a fine artist or a designer? Could you ever say to someone: You need a little more craft thinking in your work?
I could imagine saying that. You could be a designer, drawing up a piece of furniture, and realize there’s no way that the piece can be made. So maybe one way craft thinking could be applied is in understanding the nature of the material which can inform design decisions. One of the things that you asked a second ago, about jumping between materials when you’re not a master of them, I think, is a really exciting place to be as a maker. Maybe that design of a chair is really amazing, and in order to get there, you have to use a different material or rethink or reimagine entirely what that object is or how it goes together. Creativity can come out of being a novice or a beginner.

How then do you approach object-making?
The first way is appreciating things, just in the world, from the dustpan that the street sweeper uses to the napkin holder at a restaurant. Just paying attention to the decisions behind how things are made is really fun for me. It’s amazing to think about how, aside from nature, everything that we touch in this world has been designed and crafted. We love what we love because we have some kind of connection to it. Is it a story? Is it a material? Is it from a specific place? Did we get it from someone? Most people don’t even think about these characteristics, but if it’s your discipline or practice, you’re tuned into these details in a different way. 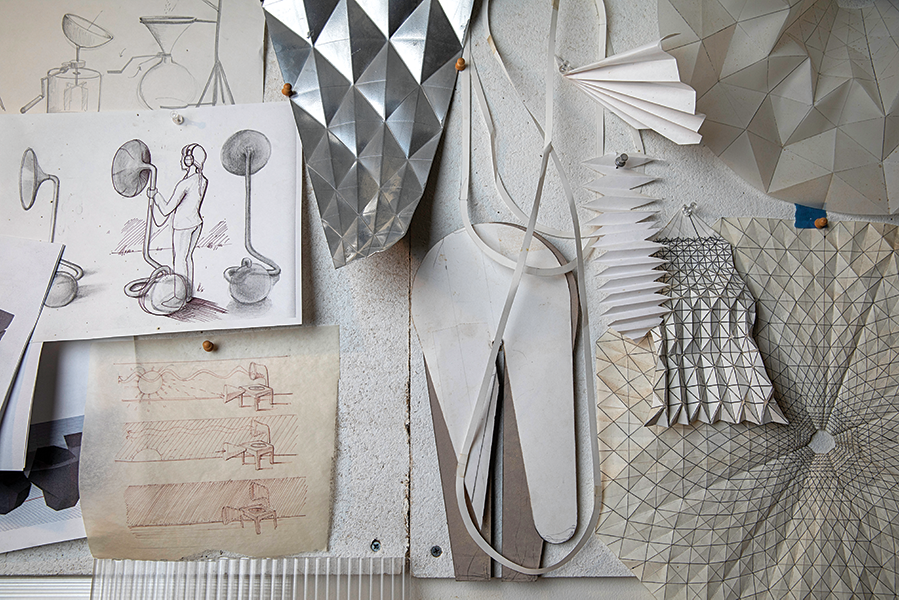 ↑ A “process wall” in Mouser’s studio contains experiments from 2015 to 2019.
Photo: Mark Tuschman