Heath Ceramics sets a table with traditional and contemporary West Coast color and style.
In this section
Exclusive stories from makers across America
Join us

↑ Founded by Edith Heath in 1947 in Sausalito, California, Heath Ceramics continues to produce stylish, thoughtfully made wares under the leadership of Robin Petravic and Catherine Bailey today.
Photo: Courtesy of Heath Ceramics

The cover of the July 1952 issue of House Beautiful featured a sunlit wooden table laid with Heath Ceramics dinnerware in earth tones and pale blues, each place setting with its own small covered dish promising something savory under the lid. Waves crashed in the background. It remains an ideal scene of California entertaining, something that Edith Heath was passionate about promoting and shaping throughout her career. Admirers of her eponymous ceramics consider Heath to be one of the 20th century’s great designers and entrepreneurs, right up there with Eva Zeisel and Ray Eames.

From the beginning, first under Edith Heath’s leadership and now with owners Robin Petravic and Catherine Bailey, Heath products have been thoughtfully made for a beautiful table, not just because exquisite table settings are so lovely, but because the table itself is a major nexus of domestic consumption. The dinner table is the destination for much of what we buy; it’s where we eat what we eat, and it’s the last port of call for what we toss out. As a designer and as a businesswoman, Edith Heath was mindful of it all. 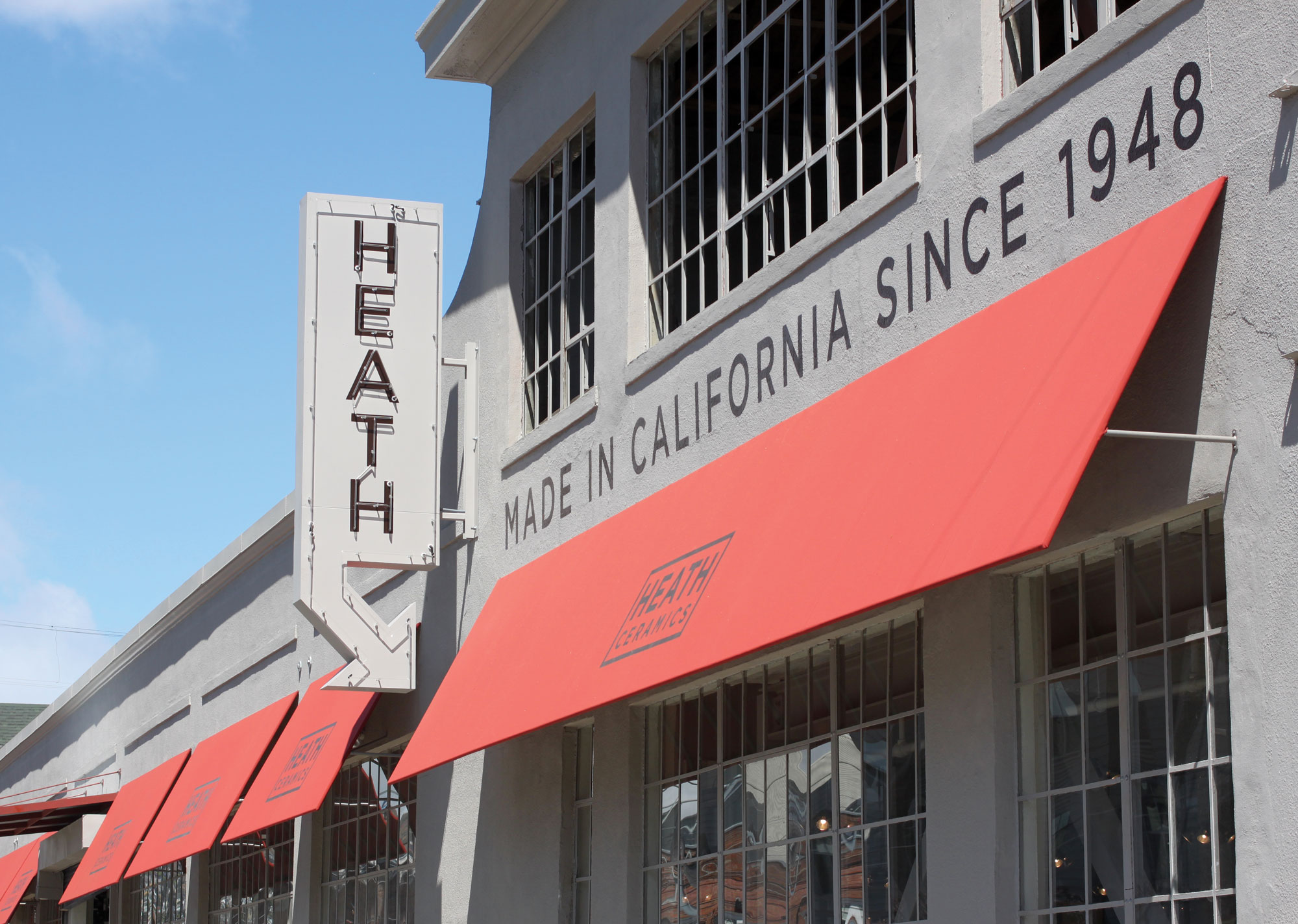 Lessons from Deprivation
Born in 1911, Heath grew up on her family’s Iowa farm, the eldest daughter of seven children. When her family went bankrupt in 1927, after years of financial hardship, their farm and most of their possessions were sold at auction. Describing the impact this had on Edith in an episode of Artbound, curator Jennifer M. Volland explains: “The only thing that was left [after the auction] was a table, a few chairs, some beds, and then a piano, and the Haviland china. The latter two didn’t sell because no one could afford those items at the time.” 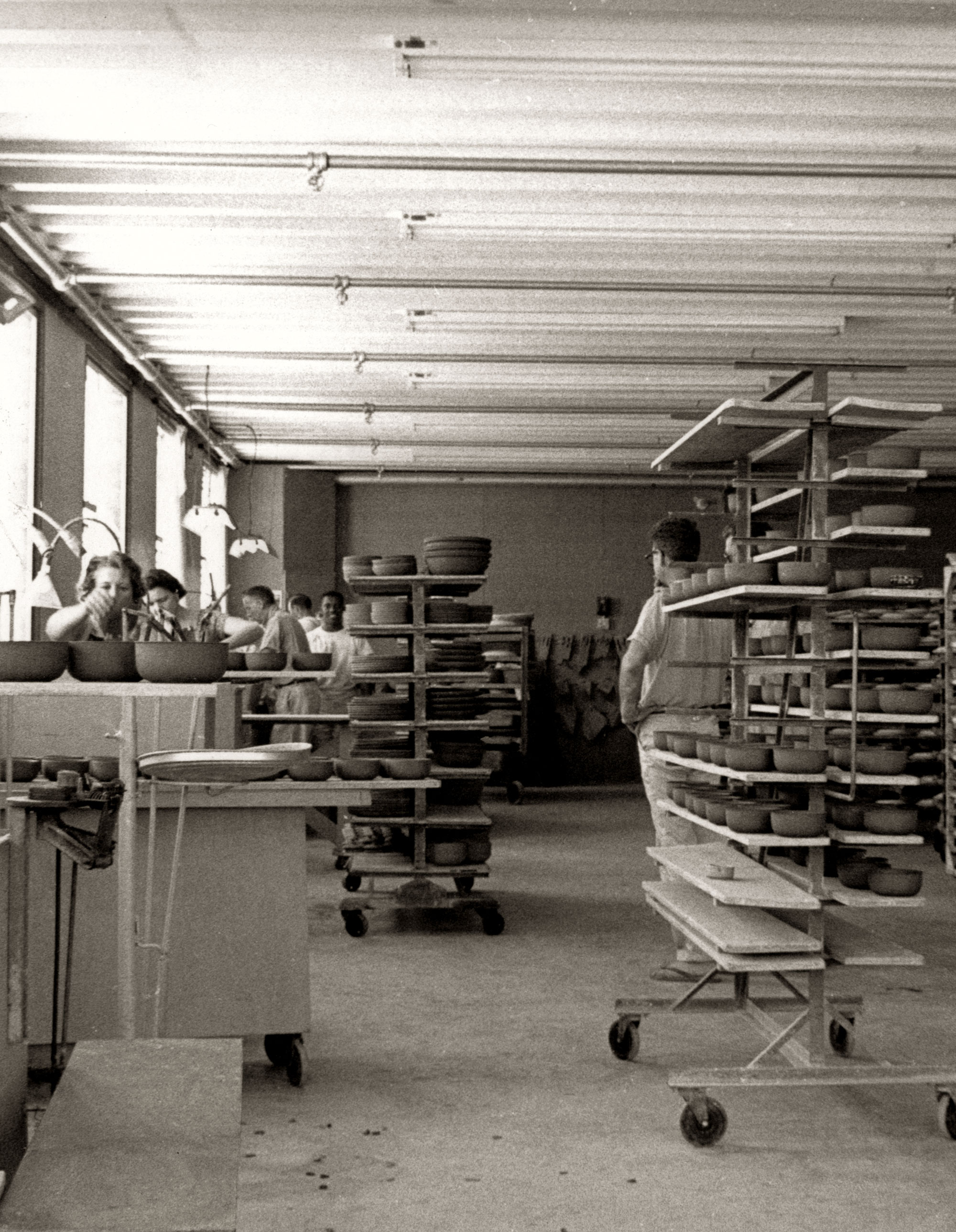 This experience impressed upon Edith that the concept of “good china” is superfluous in the modern era: Most people can’t afford expensive porcelain, and even for those who can, it rarely gets used. She followed a far more practical path as she reset the American table for the postwar era.

In 1945, Heath began selling her wares through Gump’s department store in San Francisco; in 1947, Heath Ceramics set up shop in Sausalito, California, and started to use machines to ramp up production. On both scores – massmarketing and adopting industrial techniques – she faced criticism from the studio pottery community that she was “selling out.” Heath would throw prototypes on the wheel, but the factory – like so many before it, dating back to Wedgwood – used jiggers and other technologies to make uniform wares at a faster clip. 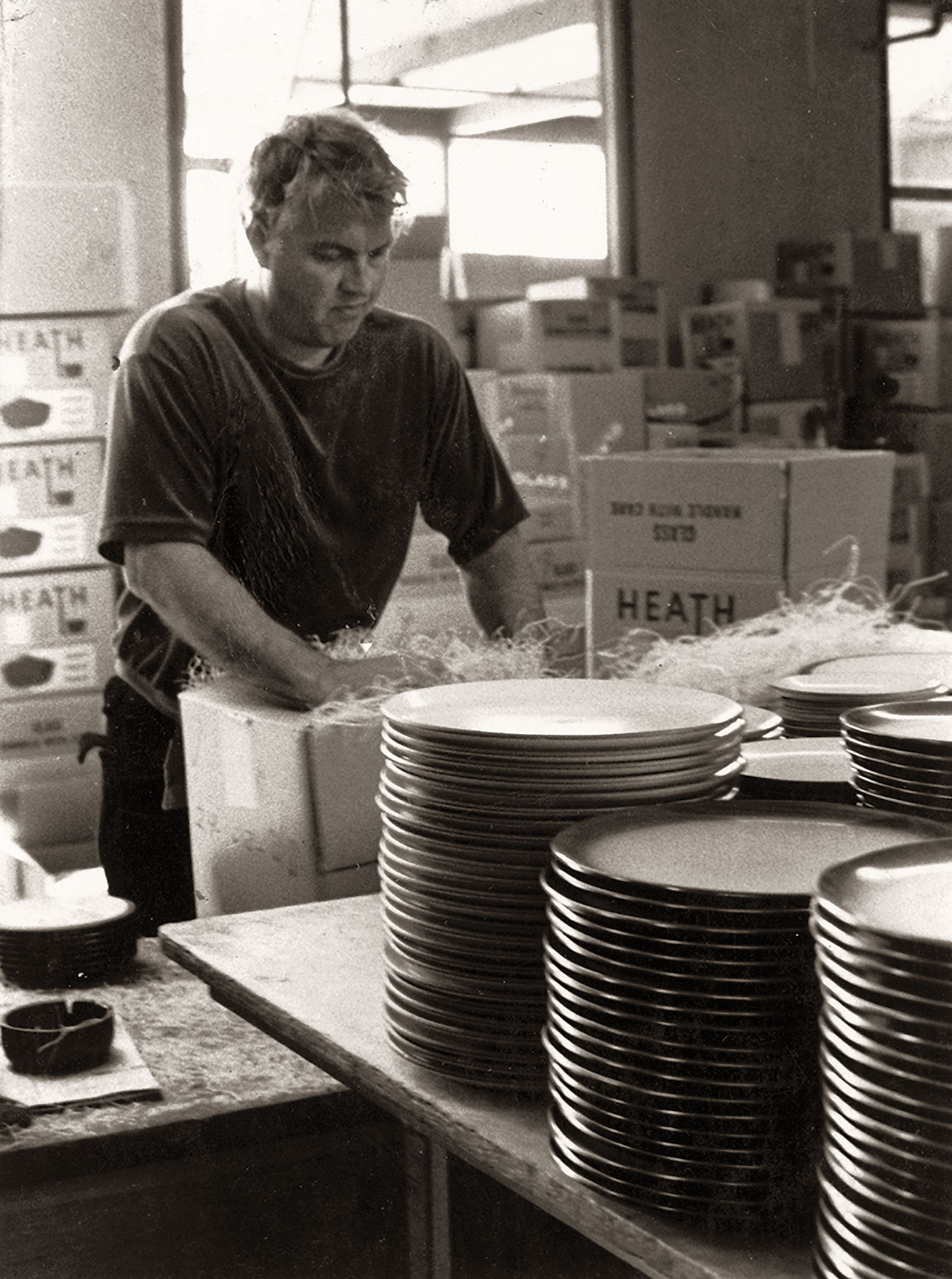 ↑ Packing plates in the Heath Factory.

Though the company adopted industrial techniques to ramp up production, Edith Heath threw prototypes by hand. → 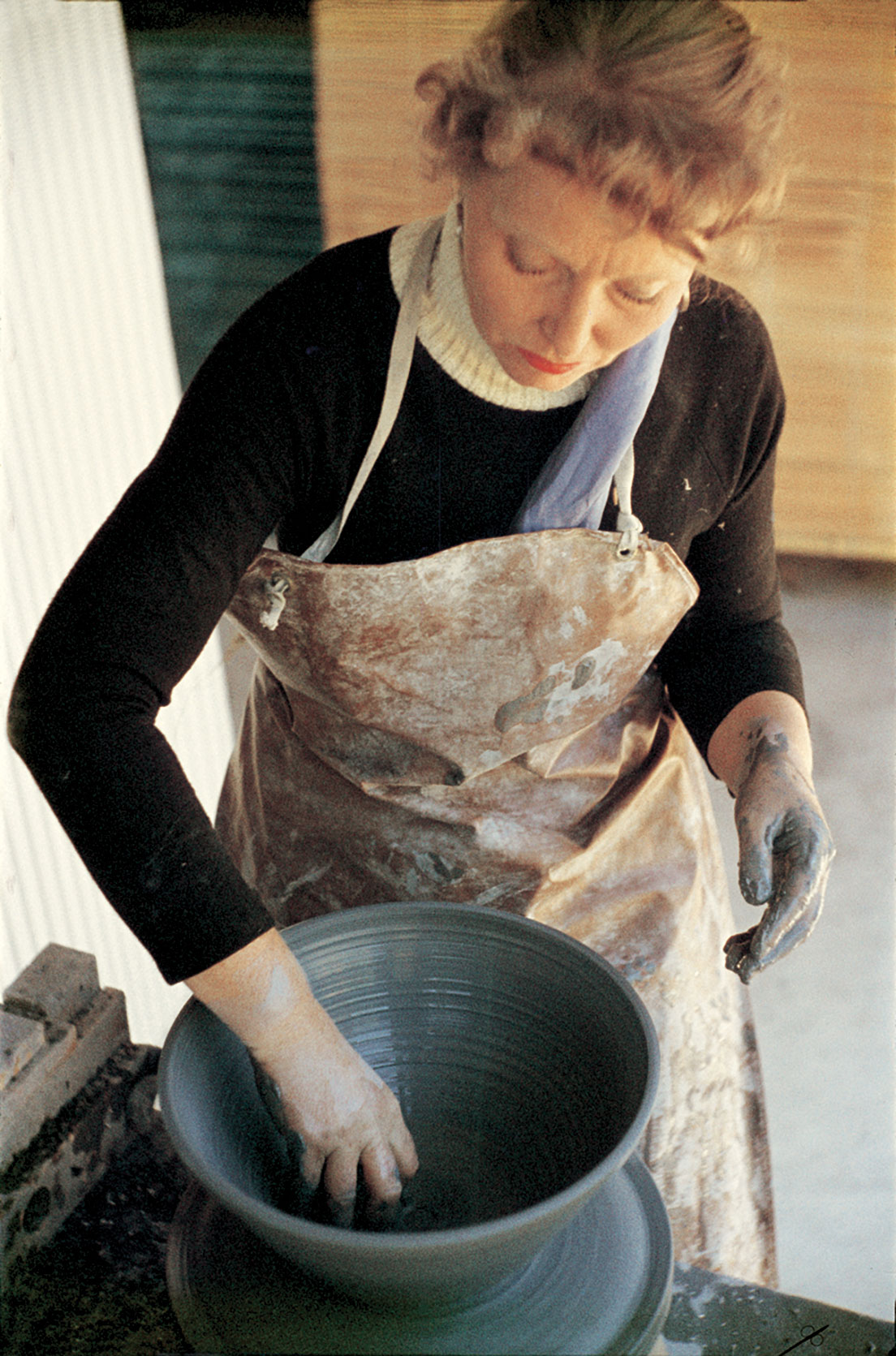 Heath Ceramics thrived in the postwar years, when modern tableware enjoyed an enthusiastic consumer base across the United States, and the company’s works were featured in high-profile shows such as the Museum of Modern Art’s “Good Design” series of competitions and exhibitions from the 1930s through the 1950s. But the business was struggling to stay afloat in Edith Heath’s final years, and deal after deal to sell the company fell through. Employees were nervous.

In 2003, Robin Petravic and Catherine Bailey stumbled across the Heath factory while walking in Sausalito; they would ultimately give Heath Ceramics new life. Like Edith and her husband, Brian, a mechanical engineer who served as Heath’s production manager, Petravic and Bailey are committed to keeping the company sustainable and human-scaled. And they have managed to make the company thrive for the past two decades. 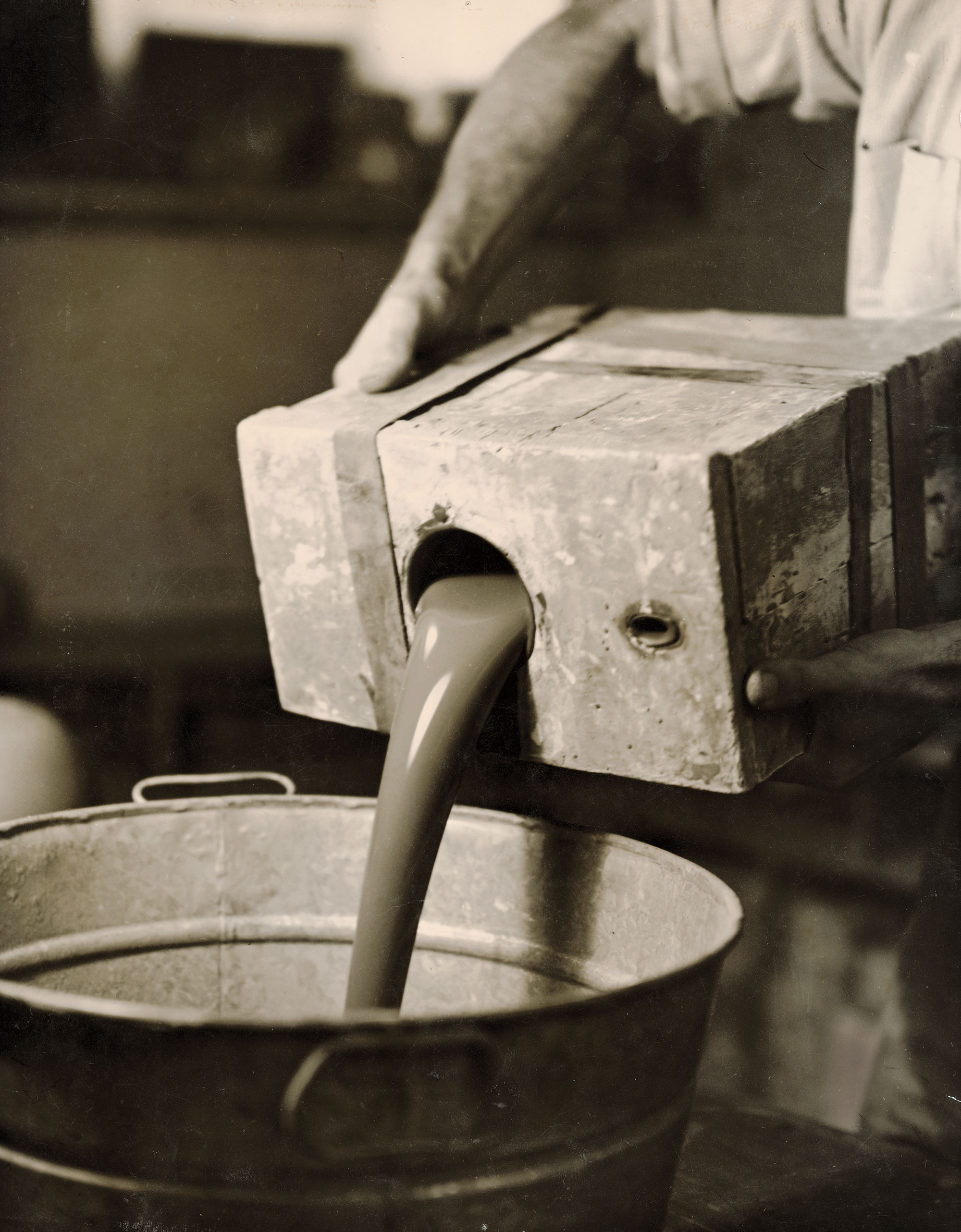 ↑ A vintage photo of liquid clay being poured out of a slipcast mold at Heath’s Sausalito factory. (The company uses slipcast molds to form wares with complex shapes, such as teapots, vases, and pitchers.)
Photo: Brian & Edith Heath Foundation and the Environmental Design Archives, University of California, Berkeley

Colors for the Creative Table
In 2020, Heath Ceramics’ Instagram feed blooms with vibrant color – peonies nestled in bright bud vases, radishes and citrus fruits arranged on scarlet or yellow platters – just as Heath’s print brochures did in the mid-20th century, although with a warmer, earthier color palette. And though the pair have made adjustments, tweaks, and improvements over the years, the essential core of Heath’s product line has remained remarkably consistent. Bailey says that much of their inspiration begins at the table.

“The table is at the top,” she says. “We’re trying to create a table that feels connected and inspiring, but people are all so different, and they want it to be uniquely theirs, so we want to create some guidance and offer something that feels like them,” she explains. Crucial to the table’s look and feel, of course, is color. “We have about 12 different core color glazes, so we try to strike a balance between having the intent of what a table can look like, and still giving people options, so they can create their own. So we create different groups of glazes that work together, and within those groups you can’t go wrong. They have something in common, and that’s why they work.” One especially delightful way to explore color and table settings is in Heath’s retail displays, where napkins, furniture, accessories, flatware, and flowers all harmonize with the wares, giving shoppers ideas for how they could use the products at home. 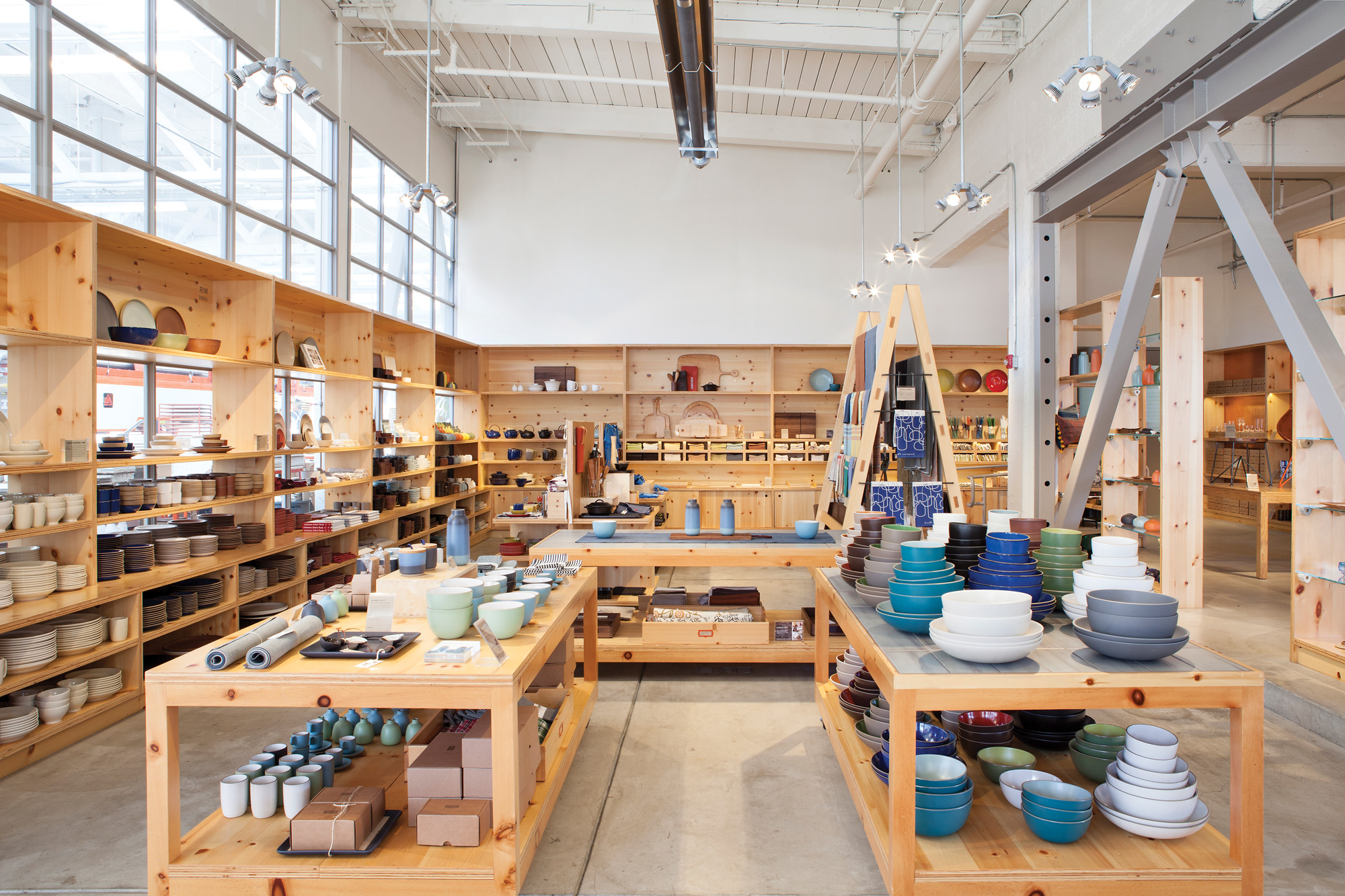 People who visit one of Heath’s showrooms or browse the website will notice a color palette that feels very current, with cooler tones than what one may remember from the era when Heath ashtrays came in hues like sienna and desert ochre. Faced with the sort of business challenges that come with adopting a legacy company, Bailey recalls, she reevaluated the color palette when she and Petravic bought Heath, mindful of balancing a rich heritage with the need to connect with new consumers. “[We had to] make sure we were representing the legacy of Heath, and it’s also for people who don’t just want to be nostalgic,” she explains.

“We’re trying to create a table that feels connected and inspiring, but people are all so different. ... We want to create some guidance and offer something that feels like them.”
~ Catherine Bailey 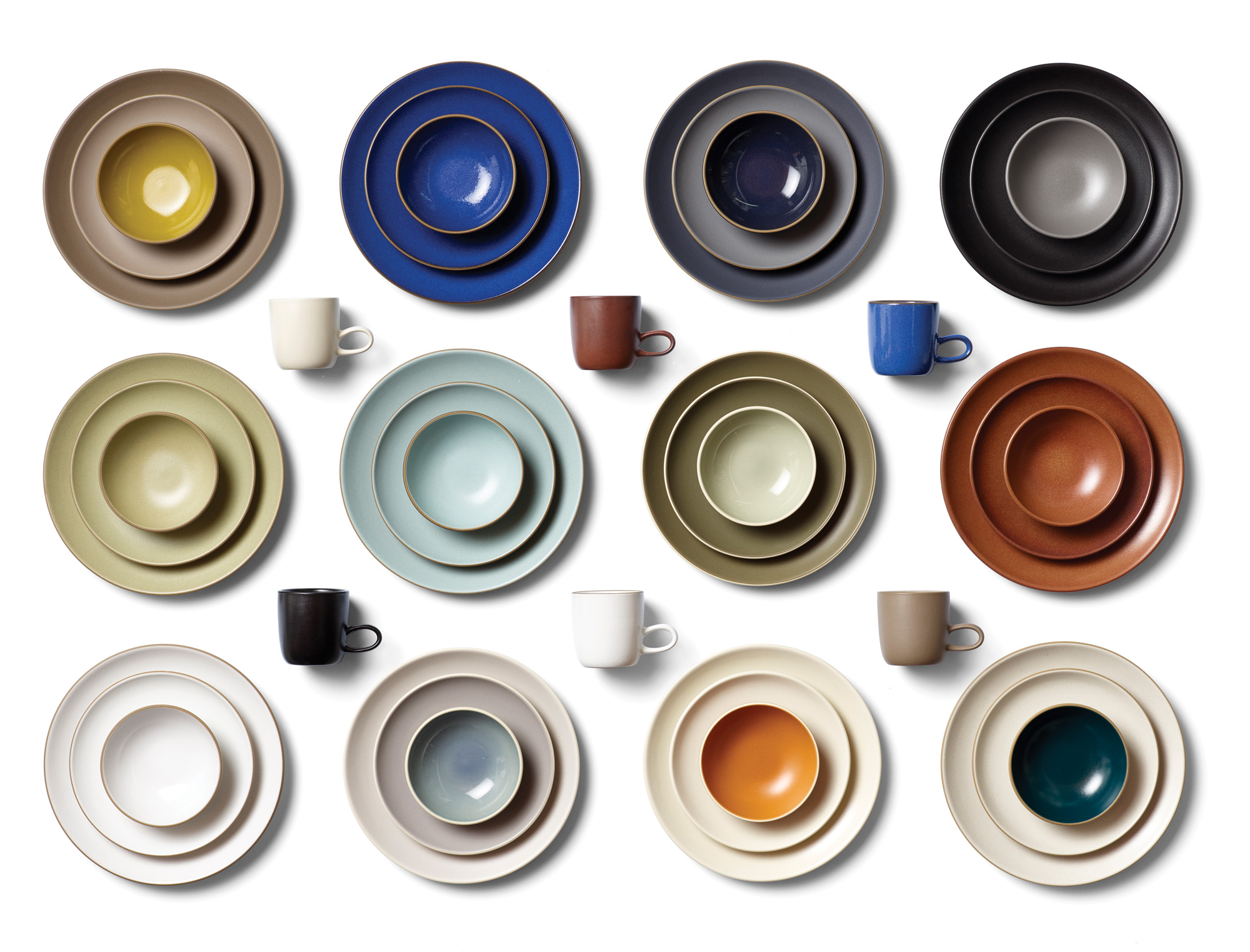 ↑ Heath’s wares come in a range of colors that work well together, making it easy to mix and match. These are the new glazes in the company’s Coupe line.
Photo: Jeffery Cross, courtesy of Heath Ceramics

Petravic and Bailey try not to change core glazes much, mindful that people collect Heath ceramics over time. On the traditional side, the firm still glazes some of its wares in colors they’ve been using for decades, including opaque white, which has been in production since the 1950s. Bailey notes that certain classics like moonstone and redwood, both popular in the 1970s, are still in the mix, and although the recipes for two cool tones, sage and aqua, have been reformulated, they are very close to the original hues. In 2008 and again in 2016, the color palette was refreshed for the Coupe line, which was the company’s first, in 1948. Heath continues to introduce two seasonal color palettes per year, which Bailey says are allowed to be “risky,” giving form to whatever feels exciting at that moment.

New Lines
Besides their Chez Panisse ceramic line, first designed in 2006 with chef Alice Waters and named for her iconic slow-food restaurant in Berkeley, California, Heath has also expanded into other kinds of household goods in recent years. The company now offers items ranging from throw pillows, blankets, and furniture to ceramic house numbers and clocks, as well as cookbooks. Recently, Bailey has been studying fine leatherwork as the company has launched Heath Sews, selling hand-crafted tote bags made of high quality leather and canvas.

Kiln to Table
More goes into a Heath Ceramics cup than most people would assume: earth, energy, color, human ingenuity, skilled hands, marketing, and design. It’s a long journey you might think of as “kiln to table,” and for consumers who want to set a modern table, it embodies the values of that table: authenticity, heritage, craftsmanship, style, and – still – plenty of casual California elegance. 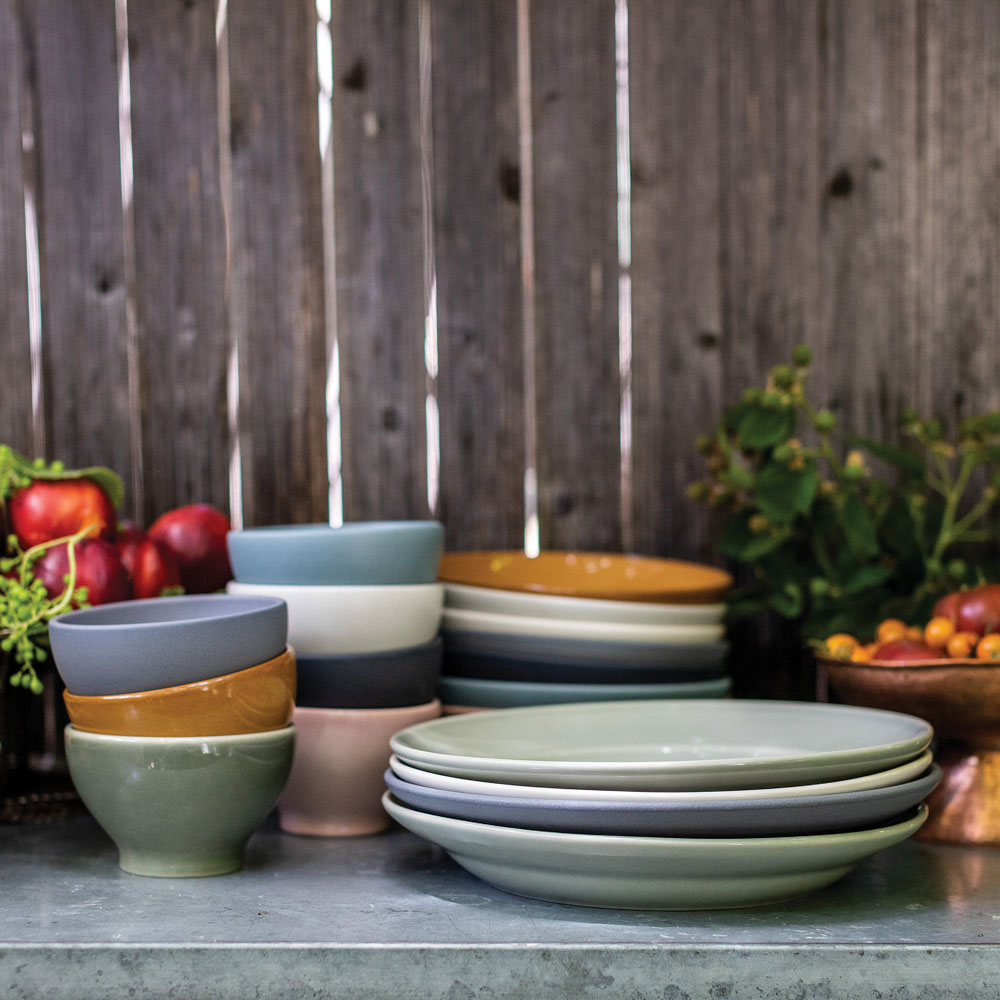 On March 27, Petravic and Bailey announced that they had taken the very difficult but necessary step of laying off some of their staff and downsizing Heath Ceramics for two to three months. With the Bay Area under shelter-in-place orders, their factories and showrooms must sit idle while the team fulfills website orders as best they can and makes plans for the future.

Bailey shared this statement with American Craft: “This crisis is particularly hard on Heath as a business. We have thrived on personal connection, physically crafting our products in our community and selling the majority of our ceramics through in-person connections in our physical locations. Sheltering in place has closed that all down, but what is important is that Heath has been around for 72 years. Our ideals, values, and products are more relevant now than ever. As we navigate through closures and into restarting our factories, we will be a smaller company, but our iconic ceramics and ideals will be unchanged.”