Four years ago, when fiber artist Aaron McIntosh was working in his grandmother’s garden, he had an insight. As his grandmother lay dying in southern Virginia near the West Virginia border, McIntosh realized that the weeds he was pulling were a lot like queer people – native plants that, for whatever reason, are not wanted. Weeds, he decided, “are a pretty potent metaphor for how I think a lot of queer people are viewed.”

A native Southerner, he decided to tackle the ultimate plant non grata from the region and set about making his own kudzu. A year later, he’d made an unwieldy morass of faux foliage, incorporating elements of his Southern queer male identity – images from gay dating sites, text messages, personal ads from gay magazines, quotations from Whitman’s Leaves of Grass and Capote’s Other Voices, Other Rooms. Then the artist, 33, realized he needed to think bigger. One small, dead tree smothered with “kudzu” was not going to cut it. “I actually needed to think about filling a whole gallery space or just somehow invading an entire gallery with it,” he recalls.

He’s almost there. In April, he’ll open an inaugural show of his "Invasive Queer Kudzu" project at the School 33 gallery in Baltimore, representing not just his own experiences as a gay person in the South, but those of scores of people who’ve taken part in workshops and other events McIntosh has hosted since 2015. The centerpiece of the show will be heaps of “kudzu” cascading over a replica of the corner facade of the Hippo, one of the oldest openly gay nightclubs in the country, which closed two years ago to become a CVS in a historically gay (but rapidly gentrifying) Baltimore neighborhood. 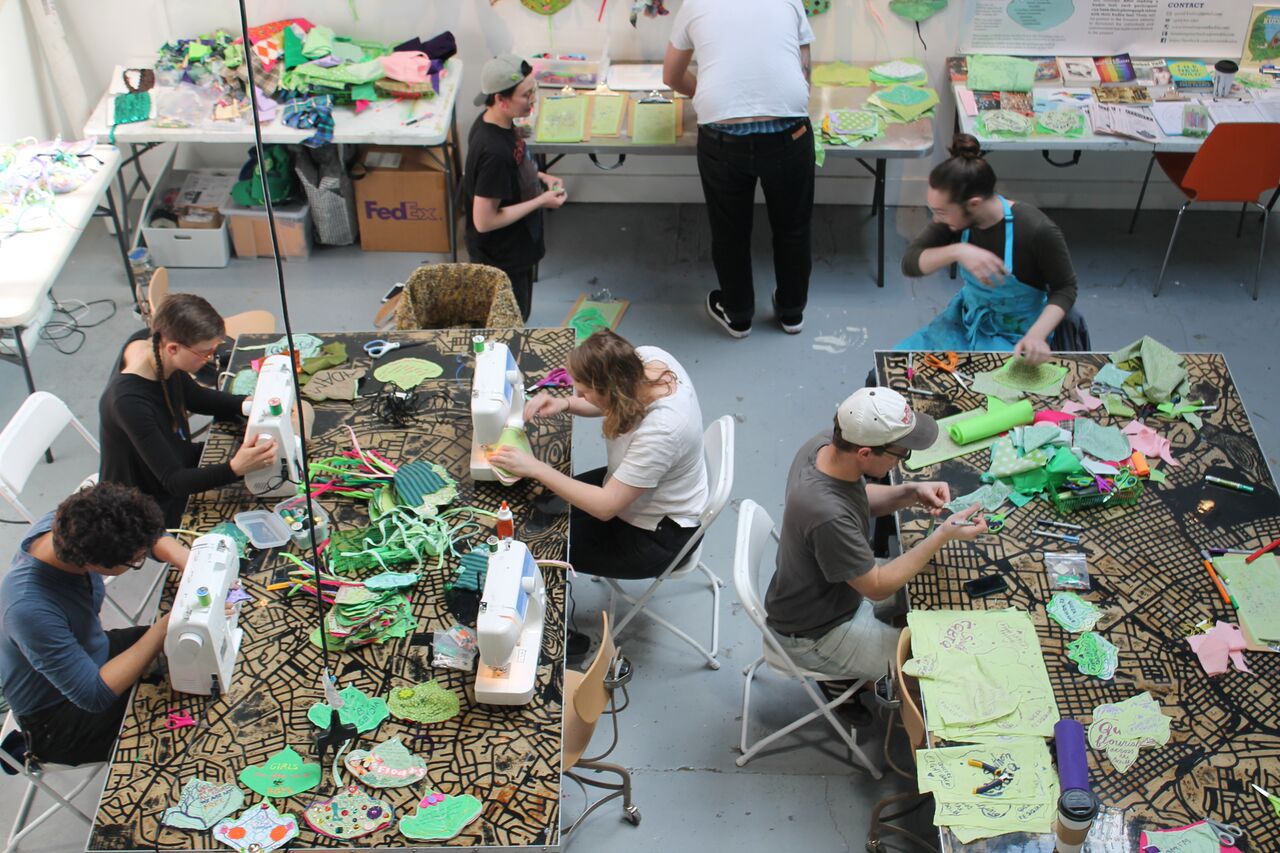 Participants in one of McIntosh's workshops make their own kudzu leaves. Photo: Courtesy of the artist

To get to this point, McIntosh, head of fiber at Virginia Commonwealth University in Richmond, Virginia, has collected stories from queer people in communities throughout the South. He’s also mined LGBTQ stories from the ONE National Gay & Lesbian Archives at the University of Southern California. McIntosh does not consider himself a social-practice artist; at heart, he says, he’s a teacher. But informed by social-practice projects, such as Sonya Clark’s Beaded Prayers, and funded by a grant from the Windgate Foundation, he’s guided queer people in encapsulating their stories on fabric leaves that are ultimately quilted and added to a mass of other leaves and earlier stories.

Sometimes LGBTQ organizations hire McIntosh to lead workshops where participants not only share stories, but also quilt their own leaves. In less formal settings, such as Pride events, the focus is on storytelling. “People will actually sit with me for up to an hour and hang out, make their leaf, chat, process – sometimes process some really intense and painful stories.” They write on leaves, which they leave behind with McIntosh to quilt later and add to the kudzu.

What is different about Southern queer stories? McIntosh recalls that when he began collecting stories in 2015, the Supreme Court was deciding on the legality of same-sex marriage. “In the build-up to that, that we saw numerous states, maybe most vociferously in the South, explicitly denying same-sex marriage, but not only stopping there, but going on to make illegal adoption by same-sex couples and a lot of nefarious legislation.” It was painful, he recalls. “Queer Southern people have to reckon with this stuff in a very real way,” he says.

At the same time, having seen “so much beautiful queer vivacity across the South,” he dislikes the stereotypes he sees of the region as regressive and repressed. In the past two years, he’s heard stories that could’ve happened in lots of places, he says. He remembers a woman at the Washington, DC, Pride event telling him about the wife she’d married seven years before – whom she had kept secret from the family she visited every month. “That story could happen in the Midwest,” he says. “It could happen in New York City; it could happen anywhere.”

McIntosh loves the South for its deep, multigenerational family ties, its tight-knit communities, and its cuisine and distinctive cultures. He loves queer stories for their “visibility, strength, and tenacity in the face of presumed unwantedness.” In his kudzu project, he’s weaving the two together.

An installation sketch for an invasive takeover of the Robert E. Lee statue in Richmond, Virginia.

Courtesy of the artist

A postcard promoting an invasive takeover event in Baltimore.

Courtesy of the artist