↑ A crew of Tiny WPA participants builds a table for a plaza. The organizaiton often co-designs projects for community-generated spaces and vacant lots – what it calls “spaces of opportunity to reimagine citizenship.”
Photo: Courtesy of Tiny WPA

Terrell Smith, 16, holds the handle of a chop saw firmly. He begins to bring it down slowly, steadily, and then stops. He raises it back up, checks the measurement, and cautiously brings the blade down again, then pauses, and brings it back up. He checks again. He repeats this process three more times and then – bzzzz – executes a perfectly mitered cut. Smith is a “Building Hero,” the newest member of a team assembled by Tiny WPA, a nonprofit design studio, maker space, and fabrication workshop in West Philadelphia.

The organization’s name, of course, harkens to Franklin Delano Roosevelt’s Works Progress Administration, the sweeping job training, infrastructure, and arts program that employed 8.5 million Americans during the Great Depression. By those standards, Tiny WPA is very tiny indeed, but it shares the original WPA’s ethos of a jobs program designed to effect social change.

Founded in 2014 by Alex Gilliam and Renee Schacht and located in the historically black neighborhood of Mantua since 2016, Tiny WPA trains young adults like Smith, as well as adult community members, in free eight-week programs to become what the organization calls Building Heroes. It operates as a type of shop-certification-cum-job-training program, where participants learn how to use a litany of tools: chop saws, table saws, drills, clamps, Adobe Illustrator, laser cutters, and vinyl cutters, just to name a few. They also learn about materials, durability, proto­typing, community engagement, and accepting feedback. Once the training is completed, trainees can apply to become paid members of the design workshop team.

“Everybody wants to build, everyone has something they want to fix or make better. There’s nothing more aspirational than building something, or fixing something, or designing a solution that addresses an issue that’s important to that community,” Gilliam says.

Tiny WPA’s designs – from cutting boards, desk organizers, and benches sold on Etsy to custom work for clients – are clean and modernist-inflected, with an eye toward durability, simplicity, and an exuberant color palette. Quite often, they’re also directly need-driven and informed by the immediate practicalities of clients, such as Philadelphia Parks and Recreation, for whom Building Heroes made a series of seesaws, misting trees, and build-your-own adventure courses in hot pink, lime green, and sunny yellow. Part of the Parks and Rec Playstreets initiative, these designs were put into play on closed city streets this past summer, providing a safe, fun space for children – an even more crucial need during the COVID-19 pandemic.

↑ This scooter was made in a cross-generational neighborhood workshop centered on play.
Photo: Courtesy of Tiny WPA

“We see ourselves as the most open design and fabrication studio you can possibly imagine. We do play a lot – play is a very serious tool in our work – but Tiny WPA is definitely a place for creating beautiful, well-designed, and well-fabricated things that meet a community’s needs,” Gilliam says.

That community-focused mission ties into Tiny WPA’s belief that connecting clients’ design and fabrication needs with Building Heroes also makes for particularly powerful learning experiences. “We believe it’s possible to simultaneously design, build, and deliver high quality work for clients and communities while providing opportunities for Heroes to learn and earn,” Gilliam says. Because the Heroes know what they produce is meaningful and needed and not just an exercise for gaining shop skills, they rise to the high standards set for them.

But what might be most impressive is that when the Building Heroes are asked what they’ve gained by being a part of this program, almost none of them list the technical skills they’ve mastered; rather, they talk about qualities like leadership, confidence, and empowerment.

“Everybody wants to build, everyone has something they want to fix or make better. There’s nothing more aspirational than building something, or fixing something, or designing a solution that addresses an issue that’s important to that community.” ~ Alex Gilliam

Kamaiyah Jackson is sanding down the edge of a two-by-four. She’s a bubbly 17-year-old whose long braids are striated with bright pink streaks. She wants to be an engineer and has gained confidence in her skills by working as a Building Hero. “I learned a lot about being comfortable not knowing something, which is a skill a lot of people don’t have,” she says. “I’ve learned how to ask for help, but I’ve also learned a lot about being a teacher. You can know something, but you don’t really know it unless you can teach somebody else. I’ve learned to be confident in what I know, to be able to walk into a room and say, ‘This is what I know, this is where I can learn, this what you can do for me.’” She continues, “I’m a Black woman in a STEM field, which is always harder than it has to be. Alex is always like, ‘You can do anything you put your mind to,’ which is really nice to hear when a lot of the world is like, ‘You can’t do it because you’re a woman.’ I’m always empowered here.”

Empowerment and trust are key components at Tiny WPA. “One of the fundamental things that’s missing in learning – and in community development – is trust, trust in people,” Gilliam says. “There’s a reason there’s a sofa and a living room set up here. We want people to come in and stay.” Though it’s not always the most efficient way of working, that perennially welcoming atmosphere is a huge part of the commitment Tiny WPA has to its community. “It centers on public engagement and workforce development, creating opportunities for people to learn and lead,” Gilliam says. “Making that connection between those things that are missing on your sidewalk, or your home, or your business, and creating rich opportunities to support and grow Building Heroes and their aspirations.” 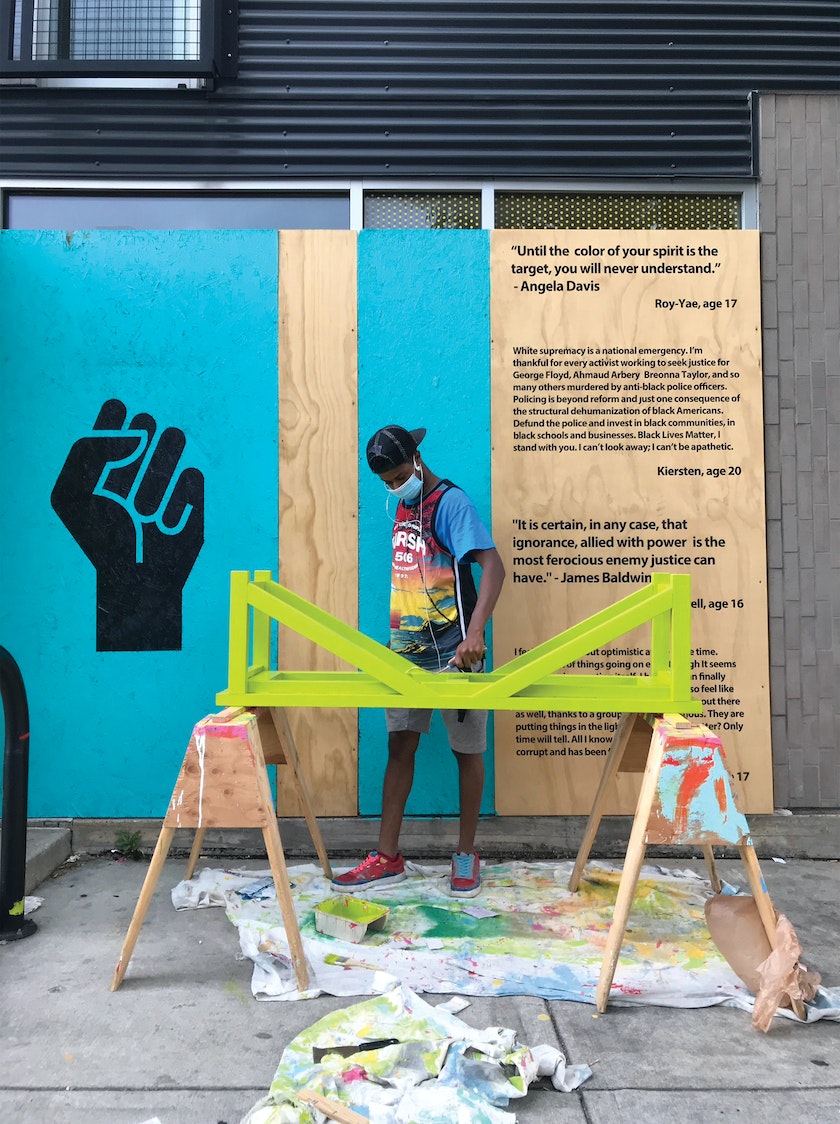 ↑ Whenever possible, Tiny WPA moves its workshop to the sidewalk, one of many tactics it uses to more deeply connect with its neighbors and passersby.
Photo: Courtesy of Tiny WPA

Sky Chandler, 18, and Tamir Speights, 21, are busy setting clamps on pieces of wood that will become part of a mobile playground for Playstreets. Chandler has been working with Tiny WPA on and off for three years and is enamored with its process of community engagement through building. “When I first got here, Tiny WPA did the park on the corner at 40th Street, and I helped with that. I was like, ‘Wow, I get to make things for the community.’ I thought that was really cool,” he says as he leans across a work table. “I learned a lot of things I’m probably gonna use in my life. It also helped me when I was in a really dark place. Being here was a release for me to keep my mind focused on the positive. I’m just happy to help the community.”

“I think it’s important for lots of people to know these kinds of skills to be able to prosper in the future for generations to come,” says Speights, an emerging entrepreneur who also runs a side business customizing shoes.

Upstairs, Brodie Bauman, 21, is at work on some Illustrator files. He is currently in his fourth year of architecture school at nearby Drexel University and has been working with Tiny WPA since he was 14. He has built tables, shelves, chairs, benches, planters, and even a deck for his parents, all with skills he’s picked up there.

“I’ve learned how to ask for help, but I’ve also learned a lot about being a teacher. You can know something, but you don’t really know it unless you can teach somebody else.” ~ Kamaiyah Jackson, Building Hero

During the past six years, his work as a Building Hero has helped to shape his life, he says. “Part of the reason I was so interested in doing architecture is because Alex is also an architect, and this is the kind of stuff that he does. If you can design a building, you can design anything.”

↑ Ryan Burke with a few of the thousands of face shields Building Heroes helped fabricate for medical staff and essential workers.
Photo: Courtesy of Tiny WPA

When the pandemic took off in the US, the Building Heroes had the opportunity to give back to their community in a new way. Tiny WPA partnered with a local high school and artists to make thousands of medical-grade face shields, which were donated to area hospitals during the critical PPE shortage. This past summer, they shifted to making reusable, commercial-grade face shields that were donated or sold to essential workers.

Tiny WPA is, well, tiny, but the ripple of positive effects makes one wonder about what could be accomplished if there were a Tiny WPA in every city or every neighborhood, helping millions of people to empower each other and their communities by learning how to design, fabricate, and sell work.

↑ Building Heroes learn how to design solutions to interesting problems and how to use a variety of tools. But many list qualities such as leadership, confidence, and empowerment as the biggest skills they gain from the program.
Photo: Courtesy of Tiny WPA

The original WPA was founded in a moment of extreme national crisis similar to the one we’re experiencing today, and presidential candidate Joe Biden has publicly mulled an expansive, FDR-style approach to solving it. But Tiny WPA is much more than a job-training program; it’s a philosophy of doing good with your hands, of keeping an open heart and mind, and of developing leadership skills through radical trust and non-judgmental, self-directed learning.

Its no-holds-barred approach to creating opportunities brings to mind the famous quote by former New York congresswoman Shirley Chisholm: “If they don’t give you a seat at the table, bring a folding chair.” Tiny WPA instills the belief that you can do more than that – you can build your own table.