Through embroidered portraits and unconventional materials, an artist gives voice to injustice.

The American flag depicted on the cover of the August 31 / September 7, 2020, issue of Time magazine hangs vertically, as if it’s tired. Rough embroidery stitches form incomplete, asymmetrical stripes transitioning from black to red, with frayed ends. The threaded needle remains in the final bar – its job is unfinished.

The hand-embroidered flag was created by Nneka Jones, a 23-year-old Trinidadian artist and recent University of Tampa graduate. It graces a special issue of Time titled “The New American Revolution: Visions of a Black Future that Fulfill a Nation’s Promise,” a collection of essays and conversations about America’s racist past and future potential, curated by musician Pharrell Williams. 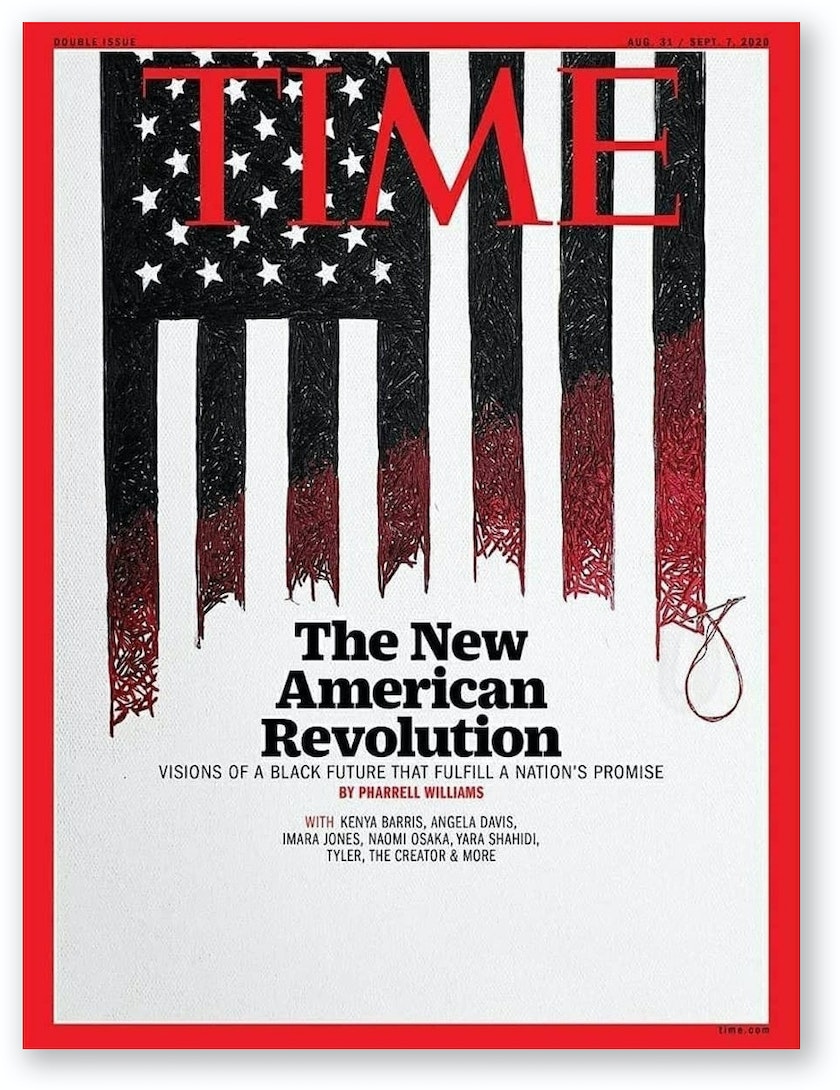 "I see the stitches as kind of a bird’s-eye view of people protesting in the streets for movements such as Black Lives Matter."

Jones discovered the possibilities of painting with thread only two years earlier, when she taught herself to embroider while researching an assignment for an experimental painting class with artist and professor Chris Valle.

Although the medium was new to her, she’d been drawing and painting since her childhood in Port of Spain. “My friends and I would make our own comic books,” Jones says. “That was a huge, huge foundation for coming into my technical skills. Then I developed a total love for painting.”

Her voice as an art activist was informed through her childhood and coaxed out during class assignments in Tampa, Florida, she says. “In Trinidad, what I experienced wasn’t so much racism, but colorism,” Jones says. “People of color, as a whole, divide themselves between darker or lighter. I was teased because of how dark my skin was. Even in the classroom setting, it felt like teachers favored students who were lighter.”

For the Time cover, which she embroidered onto canvas, Jones first stenciled an outline of the stripes, filling in the dark ones with haphazard, raw stitching. “The flag is supposed to represent a work in progress toward a nation that is unified,” says Jones. “It symbolizes optimism, while reflecting on chaotic current events. I see the stitches as kind of a bird’s-eye view of people protesting in the streets for movements such as Black Lives Matter.”

She also embroidered the black background behind the non-uniform stars, while the white stripes and stars are the untreated canvas. The design came from a back-and-forth process with the issue’s art director, Victor Williams, who first learned of Jones through her Instagram page (@artyouhungry) and was particularly drawn to her stitched portraits.

Jones already had achieved significant recognition locally. During her junior year, she won the William P. O’Dowd Memorial Emerging Artist Award at the juried Gasparilla Festival of the Arts in Tampa.

Much of the work for that honor also was inspired by assignments by Valle, who for one project interviewed students about their interests and concerns, then chose their main material for them. Jones says she spoke to him mostly about current affairs and women’s rights, especially among young Caribbean women.

“We all got emails the next day telling us what materials to use,” she says. “I was expecting things like nails or utensils. Instead, he told me to get condoms. I was like, what? What am I supposed to make with those?”

Her creative solution was an arresting body of work called “Targets,” which draws attention to victims of sex abuse and trafficking. For those pieces, she arranged unwrapped, unrolled condoms in target signs, then painted a bullseye on a female face over them. Only up close does the viewer see that the background circles are formed from condoms.

“After making those, I knew how powerful art could be,” she says. “I have the ability to create something beautiful to look at and so painful at the same time. I’m here to prompt people to talk about it.”

The Time cover brought Jones enormous attention, all of it positive, though she’d braced for some negative reactions. “I expected some people to say, ‘You’re destroying the American flag, and you’re not even American.’”

Her personal Instagram post sharing the cover received more than 7,500 likes and topped 750 comments, and she struggled to keep up with a flood of emails and interview requests from local and national outlets. “Honestly, I have been overwhelmed,” she says. “I’m doing it all by myself, in terms of managing everything. But I’m also extremely grateful because this is exactly what I’ve wanted.” All of her past work has sold, though she’s keeping the flag image, which she plans to frame.

"I have the ability to create something beautiful to look at and so painful at the same time. I’m here to prompt people to talk about it."

Meanwhile Jones, who hopes to continue working in the US, is already grappling with the kinds of challenges more established artists face. “I don’t want to be only ‘the condom girl’ or ‘the embroidery girl,’” says Jones, who is working on new pieces for an exhibit she can’t yet disclose. “I don’t want to disappoint people, but can’t keep making the same pieces. I want to have the artistic freedom to follow my own vision.”

What do you think of Nneka's work?

As a national nonprofit, the American Craft Council relies on the support of our community to elevate artists from across the country. Please join to today to help make our work possible.