The magical, meaningful collaboration of Wence and Sandra Martinez.
Reserve Your Tickets Today

Wence and Sandra Martinez in front of their gallery in Santa Fe in 2021. Photo by Leslie Zwail.

Wence Martinez, a young Zapotec weaver, stands at his hand-built loom, transforming the elemental spirit of a small ink painting into a woven artwork. His concentration is total as he guides threads of undyed black and white churro wool—sheared from local sheep and spun by elders from a nearby village—with his shuttle. His feet walk the treadles with a quiet, meditative rhythm, as he weaves through the challenges presented by the painting’s curves and shapes.

Two visitors from Door County, Wisconsin, who know the village and Wence’s work, gave him the painting: a glyph or symbol-like form in black and white on old newsprint. The visitors’ roommate, a young artist named Sandra Hackbarth, who grew up in Milwaukee, had hoped that they could find a weaver for it. Teotitlán del Valle is celebrated for its woven rugs and tapestries, for the legacy of craft and artistry passed down through generations. As was village tradition, the painting floated as an opportunity among weavers until it landed in front of one with the time, skills, and inclination.

Instantly, Wence was intrigued. “The painting had soul, a vibe that I can’t describe but was really attracted to,” Wence recalls. “From the first time I saw Sandra’s painting, I knew there was a connection between us. I told myself, I’m going to weave that.” 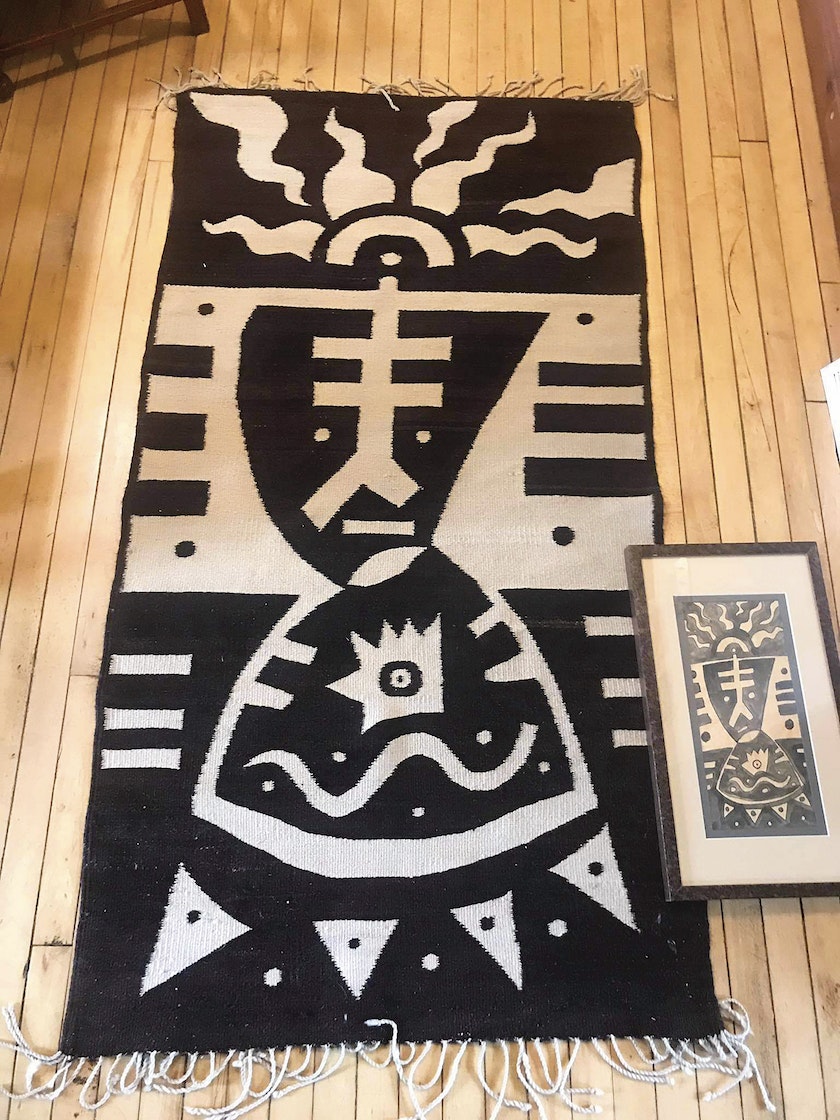 After friends gave Sandra’s painting—made with sumi ink and marker on newsprint (right)—to Wence, he re-created it in a weaving using undyed, hand-spun churro wool ( left). Little Did We Know, 1986–1987, is the Martinezes’ first collaboration. Photo by Wence Martinez.

Six months later, Wence’s rug arrives at the women’s apartment. Sandra is sleeping, so her roommates open the parcel and unfurl the rug over her body. She wakes—and is astounded. Her small painting has been transformed into a 3-by-6-foot woven work of art.

“The piece was gorgeous, and so true to the hand-drawn line and curves in the painting,” she recalls. “I was completely enamored. I wanted to meet the weaver. His skill and joy, the spirit of him, were so evident.”

Months later, Sandra and her friends traveled to Teotitlán—with 15 more drawings that Sandra hoped Wence would make into weavings. “We were so attracted to each other,” Wence says, smiling at the memory of their first meeting.

“I watched his hands smooth out the paper the paintings were on,” Sandra adds. “I marveled at how strong his wrists were from weaving. I’m thinking, Oh my god, this is an earth-shattering, fireworks kind of thing.” 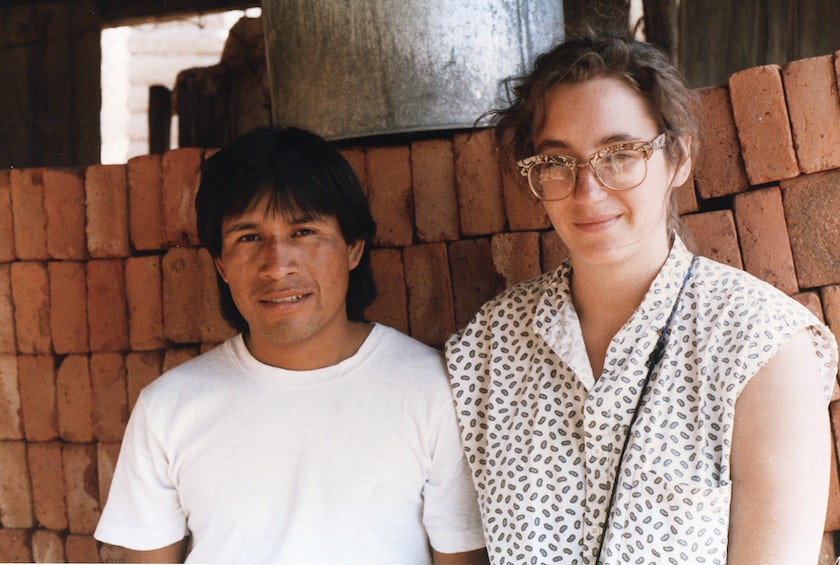 The artists in Oaxaca, Mexico, in 1989, their first winter working as a team. Photo by Maggie Wihnyk.

From then on, she continues, “We felt connected at the hip.” Both 28, they experienced with one another a kinship unlike any other. “It wasn’t only a romantic connection,” Sandra explains. “It was a recognition that we’d found another human being with the same drive, focus, spirit, passion, commitment, and joy, along with the willingness to face and accept creative risk. Well, we thought, what else are you looking for!”

“From the first time I saw Sandra’s painting, I knew there was a connection between us. I told myself, I’m going to weave that.”
—Wence Martinez

Those 15 weavings were exhibited at the Chicago Field Museum and at Convergence, an annual textiles conference in Chicago. In 1992, Sandra and Wence married. In 1994, they spiffed up an old chicken coop in Door County and opened their workshop and gallery, Martinez Studio. (They were also parenting two of Wence’s three children.)

Their singular collaborations have brought them accolades. They’ve exhibited in five consecutive Smithsonian Craft Shows; they received the 2016 Silver Award for overall excellence and the 2017 Exhibitors’ Choice Award. In 2017, they were finalists for the American Craft Council/Balvenie Rare Craft Fellowship. In 2018, they were awarded a United States Artists Fellowship. Their work is in the permanent collections of the National Museum of Mexican Art, Chicago; Smithsonian National Museum of the American Indian, Washington, DC; and the Museum of Wisconsin Art, West Bend, Wisconsin.

“Sandra and Wence Martinez have joined together to produce some of the most exciting and inventive woven textiles being created today,” says Carol Sauvion, executive director of Craft in America. Their work has broader impact as well. As Lynnette Miranda, program director of United States Artists, says, “They’ve dedicated their lives to an artistic practice that gives back to their immediate communities, the field of craft, and our society at large.”

As a child, Wence sat beneath his father’s loom in order to watch the weaver’s hands at work. By age nine, he’d grown enough to stand at the loom, so he began studying with his father and grandfather, Cosme and Manuel Martinez. Four years later, Oaxacan painter Edmundo Aquino recognized the boy’s prodigious talent and sent him, on a full scholarship, to Taller Nacional de Tapiz (National School of Tapestry) in Mexico City. 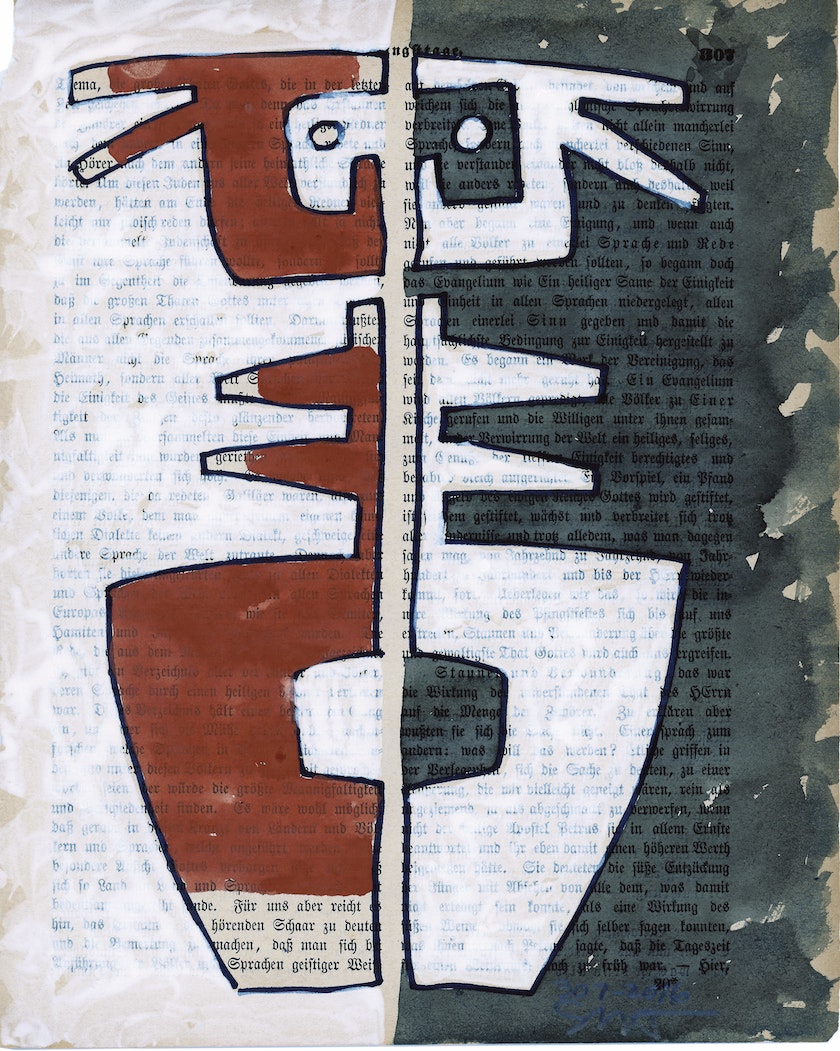 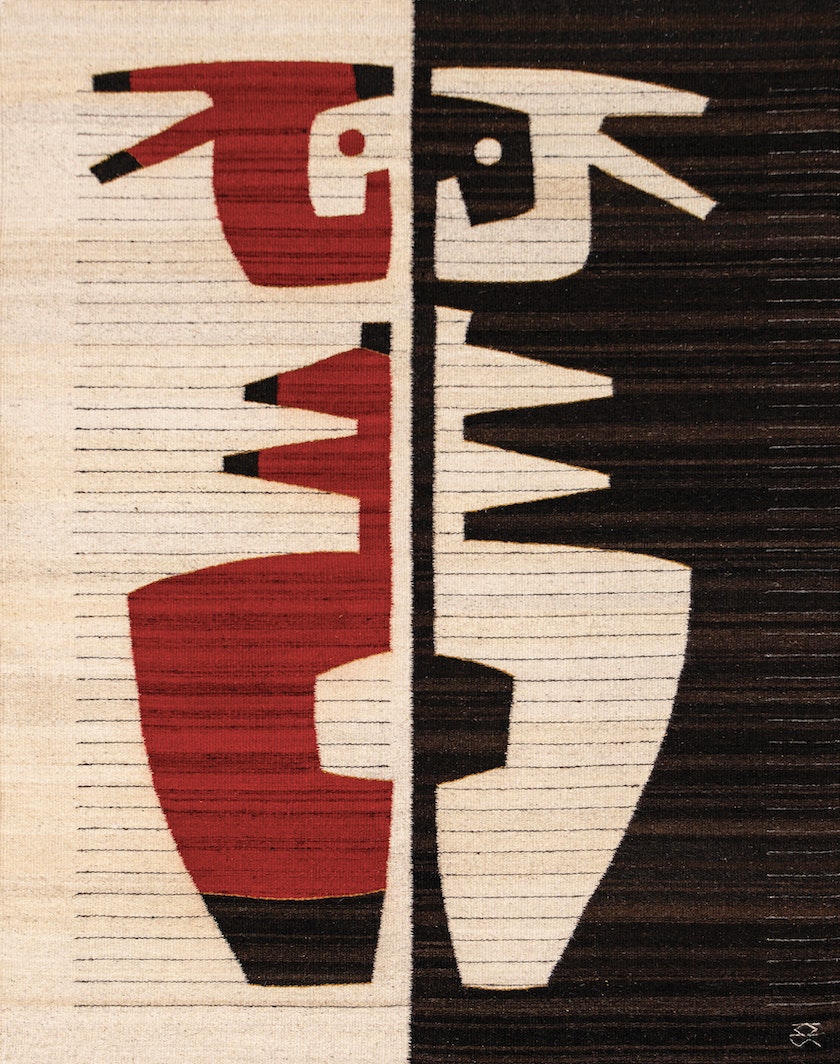 For Discusión, Sandra painted on a page of an 1855 Old German book (left). Wence’s weaving evokes lines of the text (right). Photos by Wence Martinez.

There Wence was schooled in the difficult and detail-rich tapestry techniques perfected at the historic Gobelins Manufactory in Paris. He also learned technical wool-dyeing with vegetable and aniline dyes, and how to replicate the brushstrokes in oil paintings with the tonal subtleties of hand-dyed, hand-spun wool. Aquino and the artists Carlos Mérida and Francisco Toledo commissioned Wence to weave impeccable translations of their paintings, a tradition in Mexico. Many of these works are in museums around the world, but without credit to the weaver.

When offered the position of head weaver at a workshop creating reproductions, Wence returned to Teotitlán to teach others the techniques he’d learned. But he became frustrated. He yearned to rise above anonymous production weaving, to nurture his creativity, to innovate. Then he received Sandra’s small ink drawing. “I’d already translated other artists’ paintings into tapestry,” he says, “so I knew I had the skills to achieve the work. The attraction was the technical challenges Sandra’s painting presented, along with something deeper.” 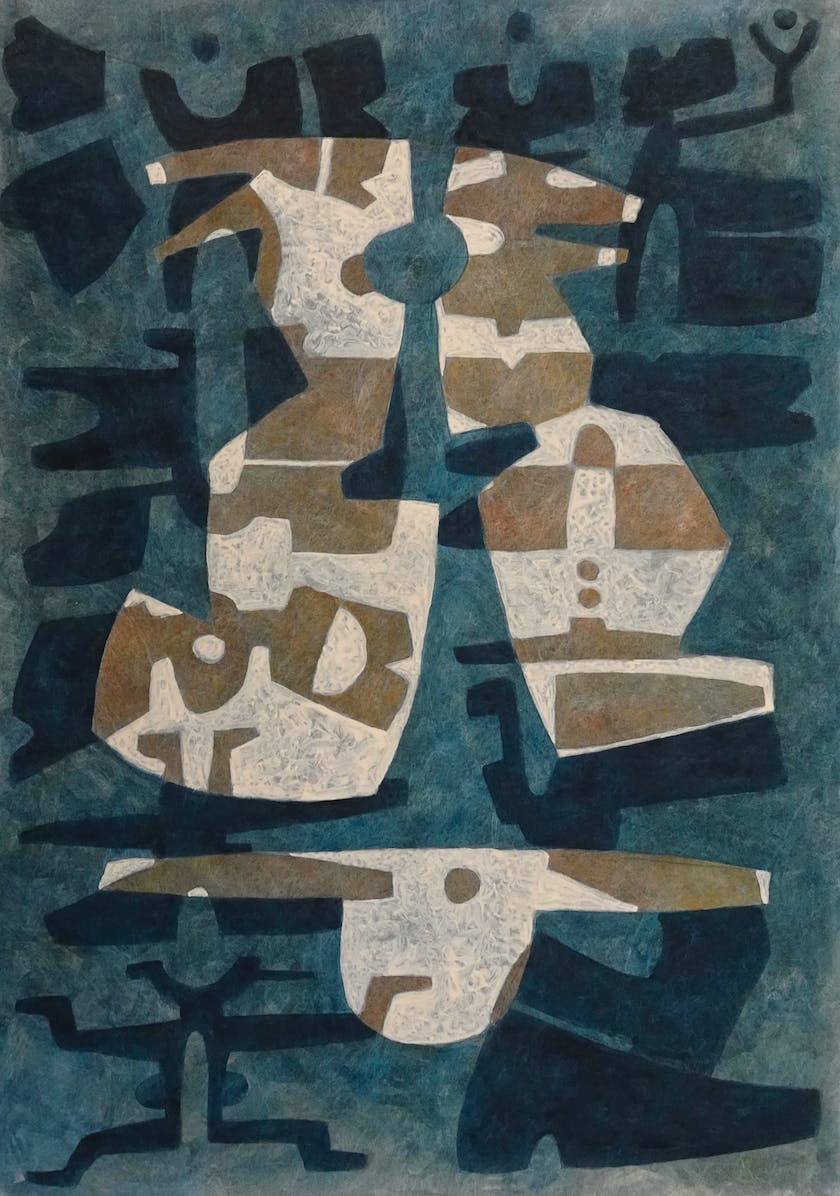 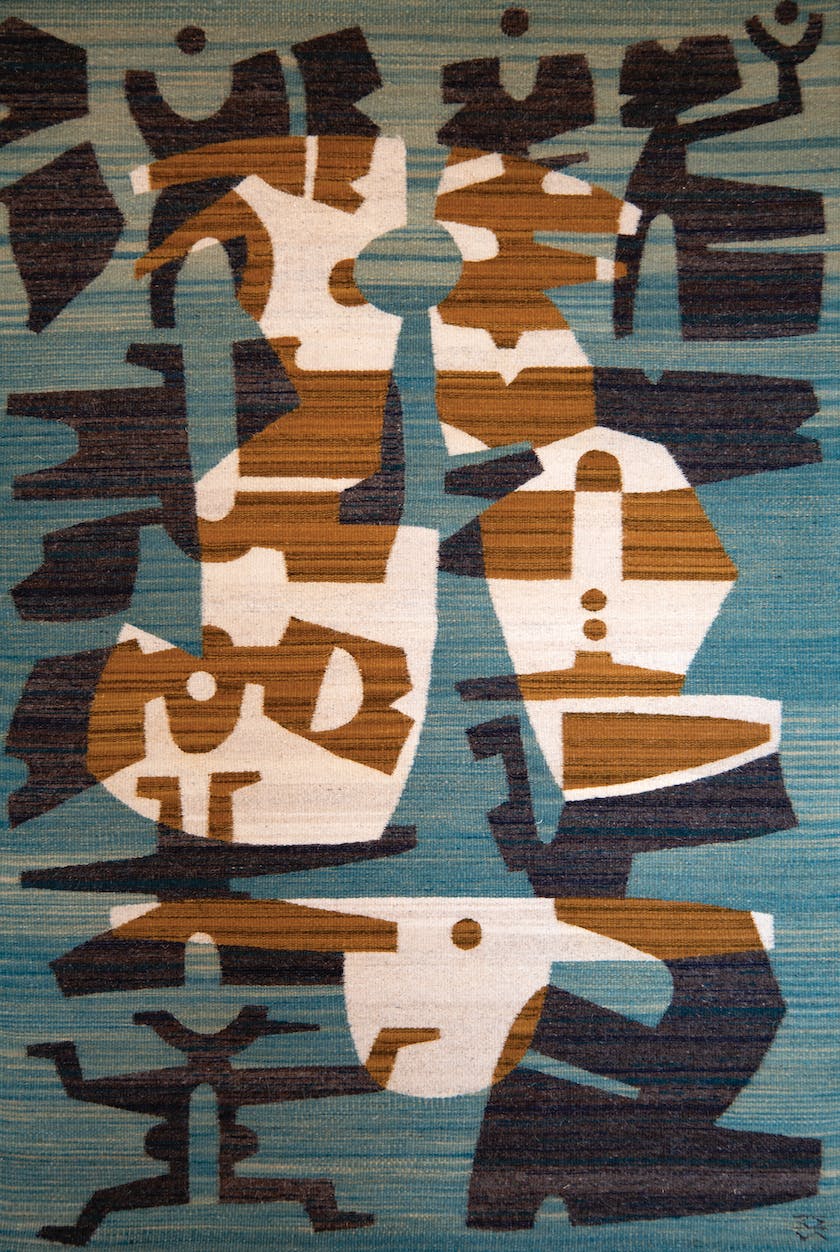 “He’s not weaving every brushstroke, but interpreting through his own lens and invigorating the woven work with his own tonalities.”
—Sandra Martinez

Meanwhile, inspired by the Haitian cut-out metal work at the Milwaukee Art Museum, and having been an “obsessive potter” from age 14, Sandra, whose heritage is German and Dutch, found her artistic wellspring in college when a mentor at the University of Wisconsin–Green Bay encouraged her stream-of-consciousness drawings. “I was attracted to all Indigenous forms of drawing, to the realization that all humans have this connection and need to create,” she explains. “I was never interested in the outside world or representational work, partly because I come from craft, from an engagement with clay.”

Sandra describes her drawing process as “creating a visual journal that’s meditative” for her. She draws on old books or breaks down their pages for collage details, in a process that offers “a release from precious materials and equipment and a release from the expected paths of making things,” she says. “The resulting objects straddle the humble and precious.” Her signature glyphs and symbols are “simple, abstracted figures that point to our kinship as humans,” she adds. Some also reference animals, plants, and shelter. 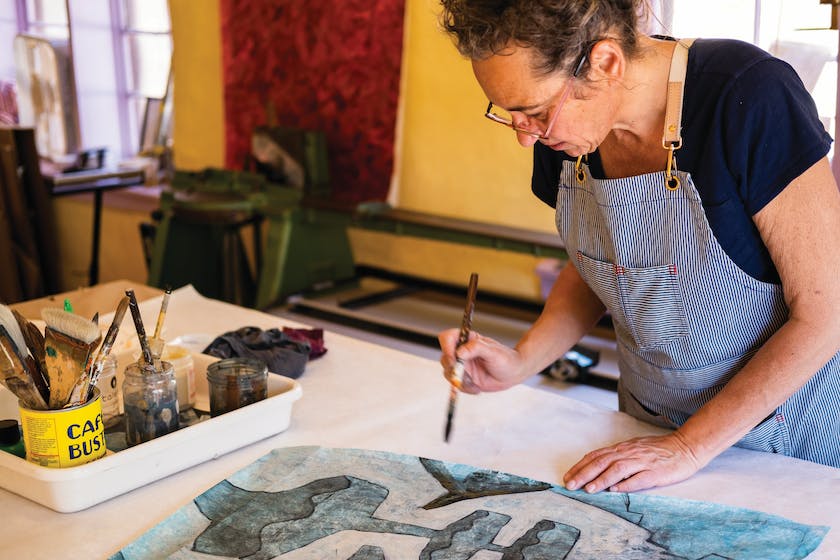 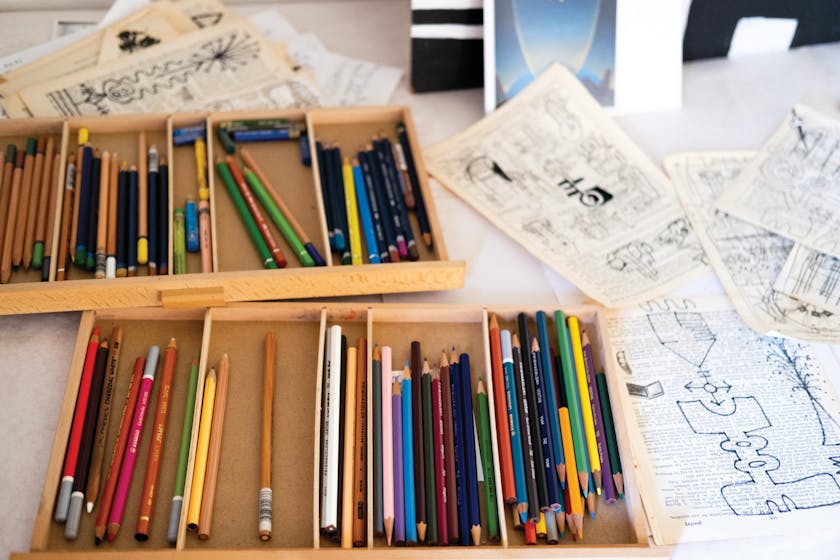 Many of her symbols appear as two halves of a whole. “I like recognizing a shadow side,” she says, “which references the mystery of the world.” Similarly, their collaborative process is an integration of two artistic sensibilities confident in their skill, awareness, and instincts, and grounded in the sense of freedom and trust they share.

Sandra is prolific: much of her artwork never becomes a weaving. She creates her art on such quotidian materials as butcher paper, book pages, even Tyvek. She relishes recycling scraps lying around the studio from older works on paper and vellum calligraphy documents; each imparts different textural elements to her process.

After making hundreds of drawings, she selects several to create as paintings, anticipating some will be transformed again when “Wence wanders in and we talk about which one could become a weaving,” she says. After making the cartoon (a full-scale preparatory drawing) and adjusting composition, scale, color, and detail, the couple sorts through Wence’s wool, which he’s hand-dyed using materials such as indigo, cochineal, lichen, and pomegranate skin. 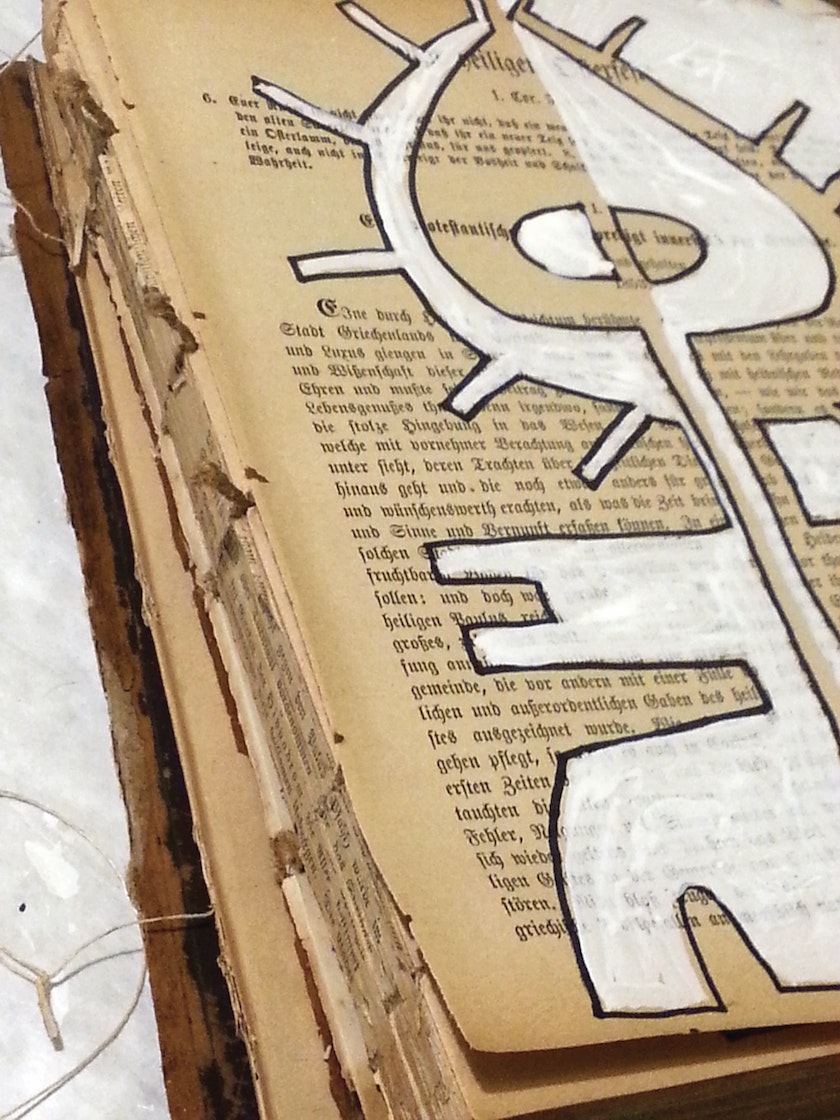 Sandra took “great pleasure in cutting up” this 1877 book of missionary writings, whose author was involved in Native American conversions. Photo by Sandra Martinez.

The goal isn’t to replicate Sandra’s painting, but to determine a wool palette with subtleties and striations that Wence can incorporate. “He’s not weaving every brushstroke, but interpreting through his own lens and invigorating the woven work with his own tonalities,” Sandra says. Having made their decisions, “there’s a big release,” Sandra says, as Wence commences his work, blessed by Sandra’s “trust level in the magic of what Wence will bring into the work.” 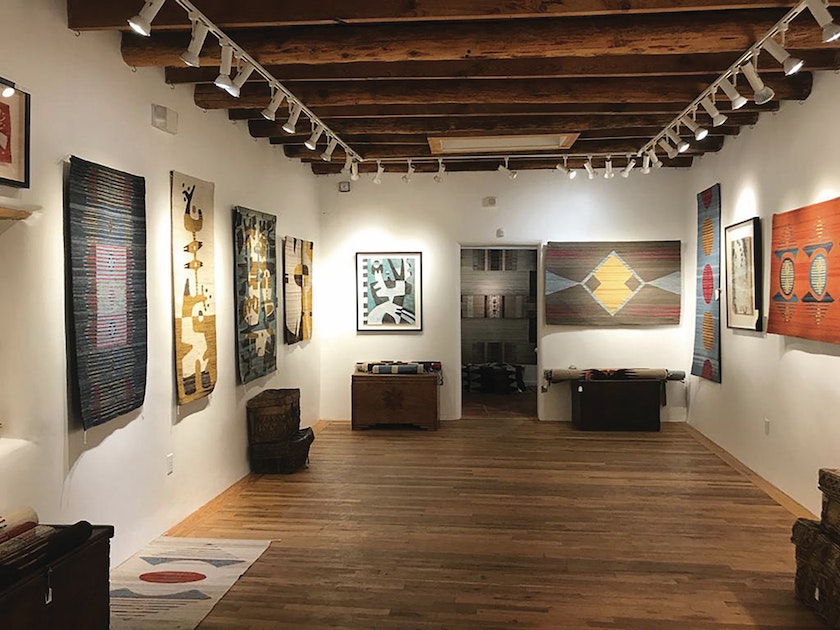 Sandra and Wence opened Martinez Studio in Door County, Wisconsin, in 1994. Their new studio (above) is on Canyon Road in Santa Fe. Photo by Brendan Ryan.

“I always feel the mystery in Sandra’s drawings; something about them touches me,” says Wence. Sandra confirms that she and Wence “dovetail in a love of things unknown. We understand each other on a level that doesn’t require words.” Just as Sandra’s drawing practice has a contemplative component, so for Wence “the action of weaving is spiritual, very Zen-like. I totally lose myself, integrating the color changes as I go.”

Thirty-three years after their first collaboration, they continue to work together and talk every day, but the nature of their relationship has changed. Sandra is currently living with her new romantic partner near the new Santa Fe gallery. Wence is teaching their children weaving in Teotitlán. “It no longer matters if we’re physically in one studio or apart,” Wence says. “We’re connected.”

At this point in their lives, he adds, “I have a real visceral need to connect with my village,” which means, in part, celebrating and strengthening the kinship he feels with local sheepherders, wool spinners, and subsistence farmers by supporting their work. Moreover, like his grandfather and father before him, Wence—who also creates his own designs, some of which are in museums—is imparting his weaving techniques to his daughter and son-in-law. 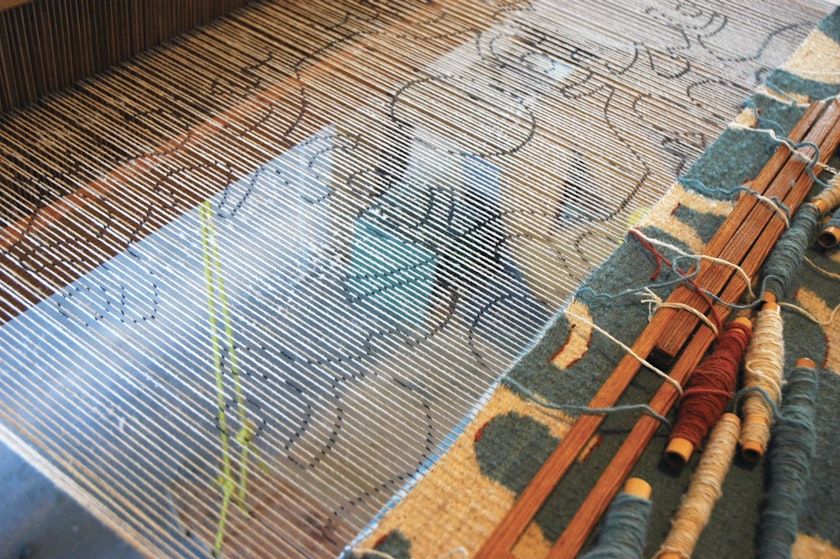 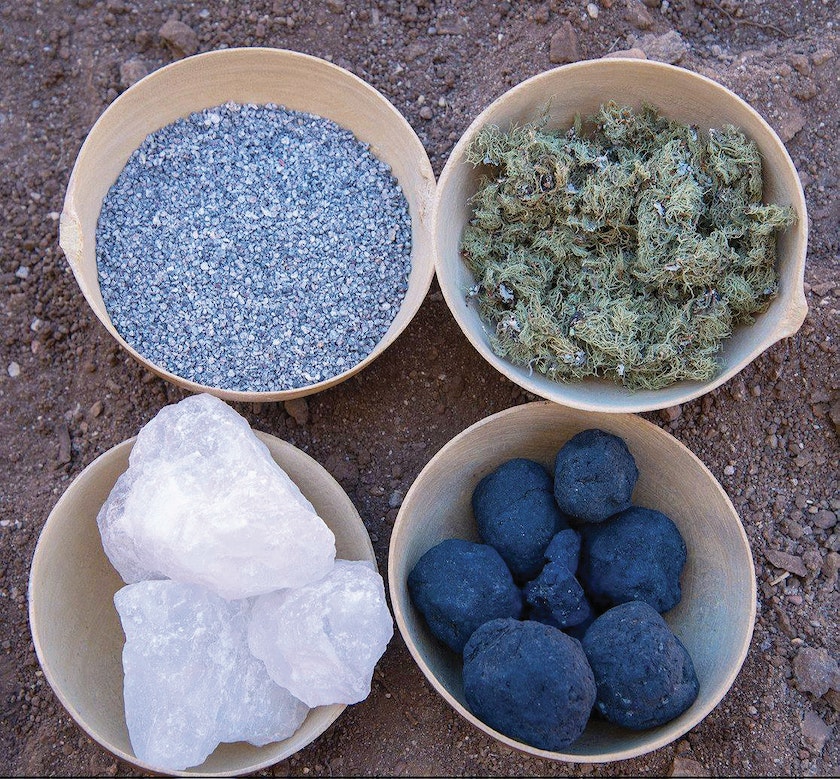 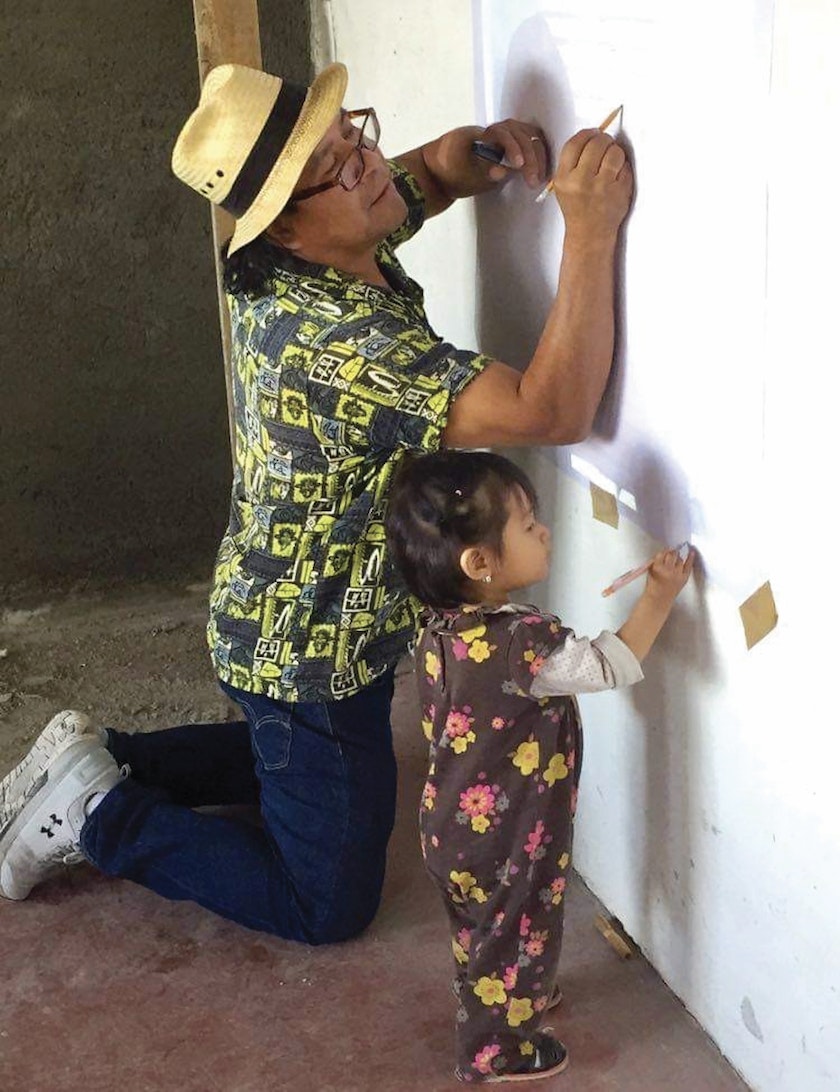 “I can’t teach them the nuances of color when I’m away,” he says. “I have to be by them to encourage them to trust their own sensibilities and instincts.” His daughter also embroiders, and the couple are now exploring ways in which embroidered wool embellishments could be incorporated into the weavings.

And so, a kinship that began with a serendipitous meeting, an ink drawing, and an aesthetic and spiritual attraction continues to inspire a multigenerational approach to creating a singular body of work. In their melding of family histories and traditions, Indigenous heritage, and artistic originality, Wence and Sandra have ushered into the world a shared vision reflected in their fiber art collaborations—a vision at once mythological and modern, dynamic and contemplative, classical and fresh. 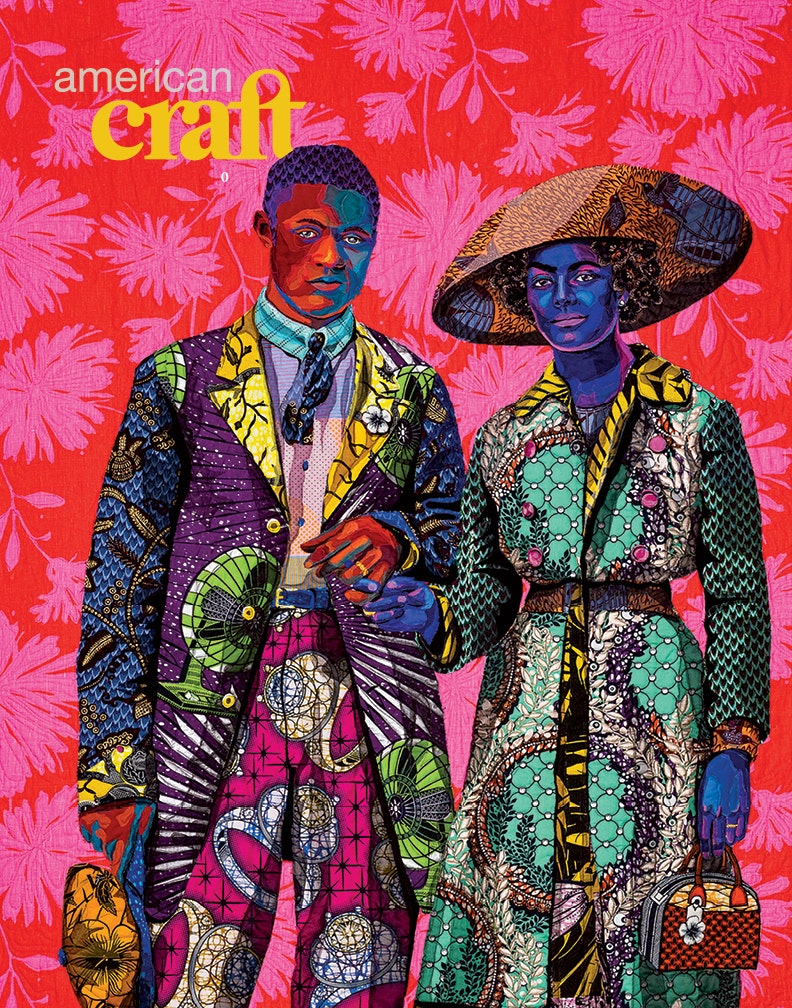 Video: The Collaborative Relationship of Wence and Sandra Martinez

Wence and Sandra Martinez were our final salon guests this spring.

The Rare Craft Fellowship Award, presented by the ACC in association with whiskymaker The Balvenie, recognizes artists in time-honored disciplines.