Theatrical wigs and the stories they tell take center stage.

Wigs aren’t meant to stand out. In plays and musicals, they should disappear into actors’ performances like discreet maître d’s, enhancing their characters without overtaking them. But as many theater aficionados know, supporting elements such as the set, lighting, costumes – and yes, wigs – do a lot of the work that brings a performance to life. We’re delighted to lift the curtain on the unsung craft of wig making and give it a well-deserved turn in the spotlight.

Laura Stearns, Jessica Rau, and Andrea Moriarity, the in-house wig team at the Guthrie Theater in Minneapolis, have mastered the subtle “art of W.” Theirs is one of a small number of first-class theatrical wig shops in the country. Here are the stories of some of their meticulously handmade creations.

All photos are by Mark LaFavor. 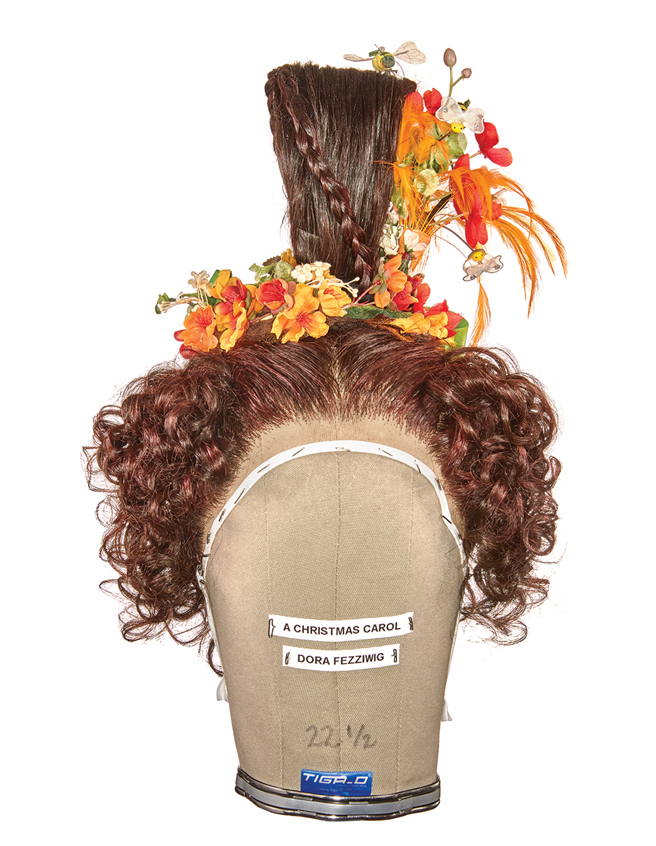 Dora Fezziwig, A Christmas Carol, 2018
This November, the Guthrie’s annual production of A Christmas Carol enters its 45th year. Each production has had up to 40 wigs, including this ornate piece, styled following British trends of the 1830s. The wig debuts at the holiday party Scrooge revisits with the Ghost of Christmas Past. Hosted by his generous and joyful former employer, Mr. Fezziwig, the festive celebration reminds Scrooge that he did, indeed, once have a heart. 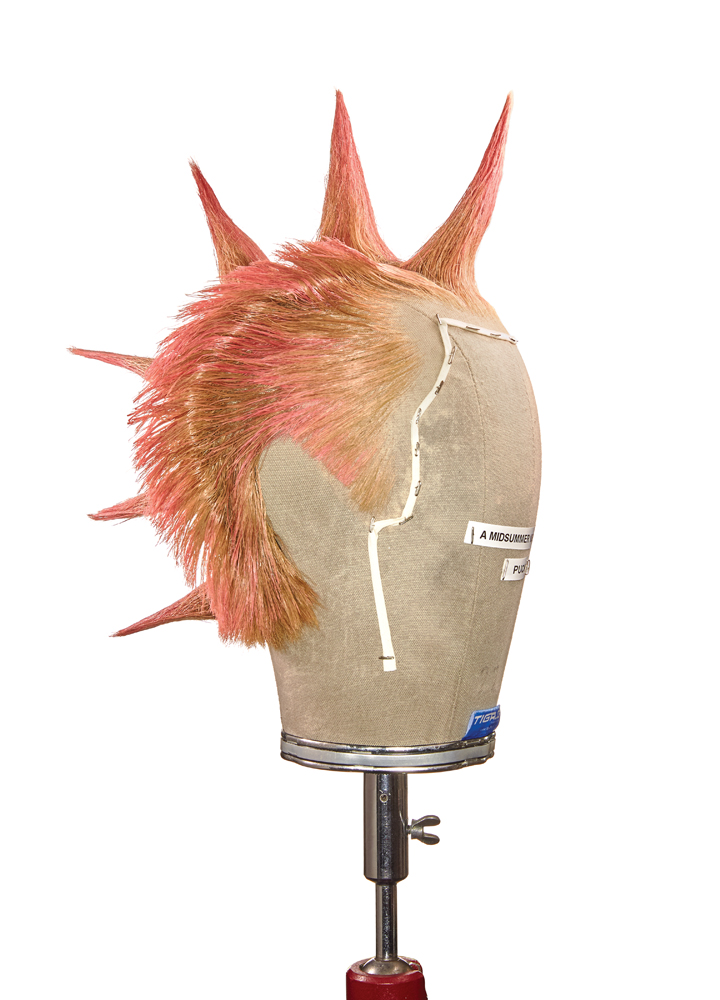 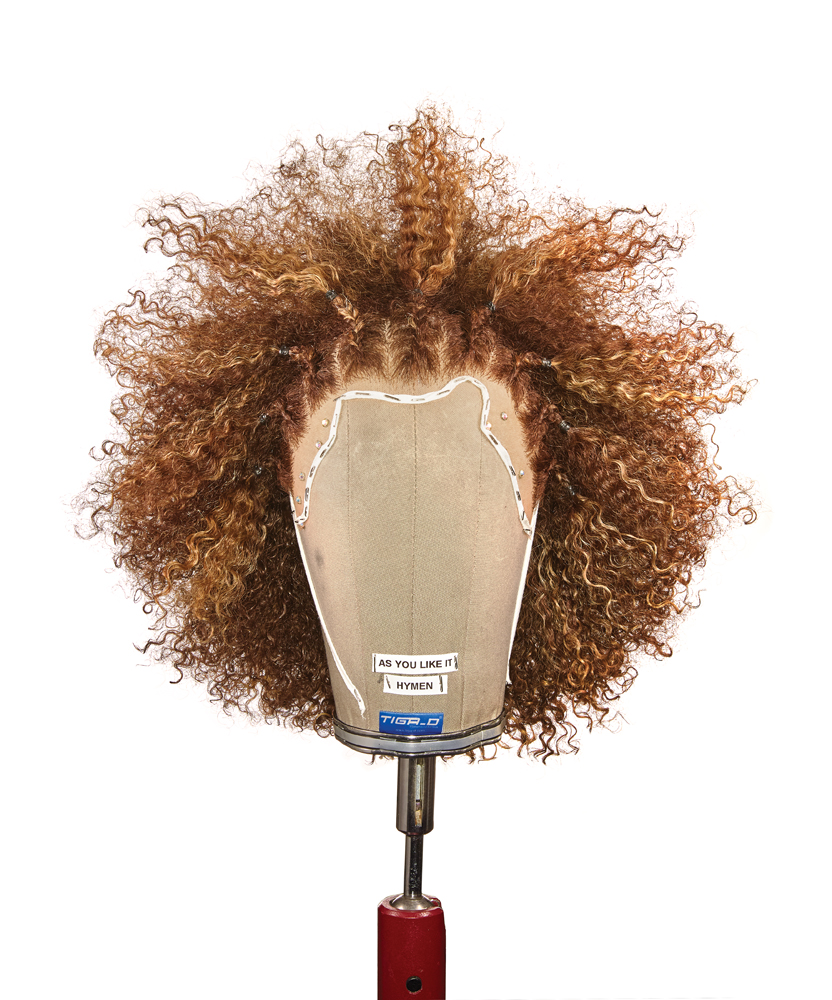 Hymen, As You Like It, 2019
This wig of permed human hair with ombre highlights was originally created for a fairy in A Midsummer Night’s Dream before it was restyled for Hymen, the god of marriage who officiates weddings at the close of As You Like It. In this modern production, Hymen is just one of the traditionally male roles that director Lavina Jadhwani switched to female. 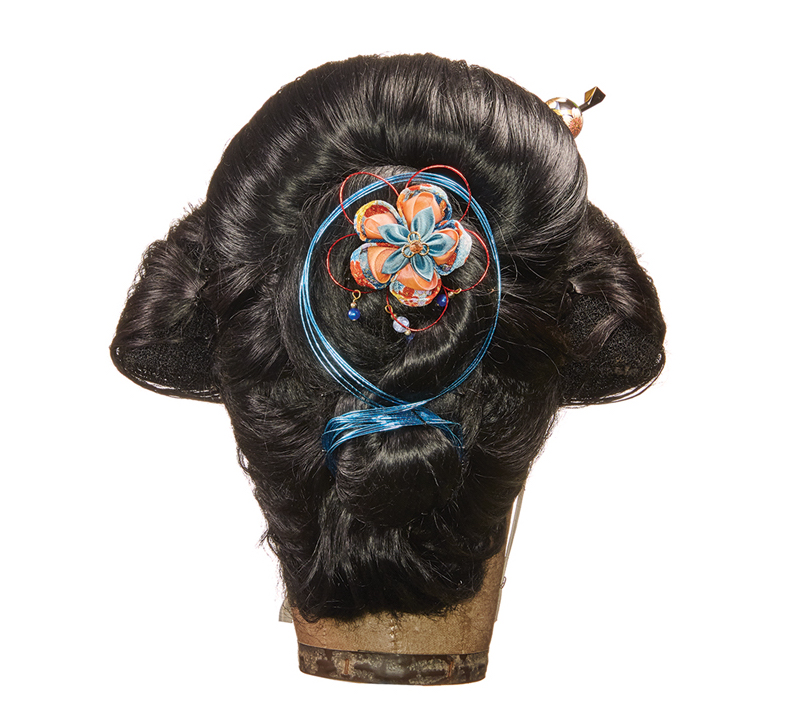 Geisha, M. Butterfly, 2010
This contemporary take on Puccini’s Madama Butterfly tells the story of a French diplomat who falls for a Peking opera performer, unaware that all female roles are played by men. Mesh stuffing gives this wig its shape. Laura Stearns studied kanzashi fabric folding, an art form similar to origami, to create the hair ornaments. 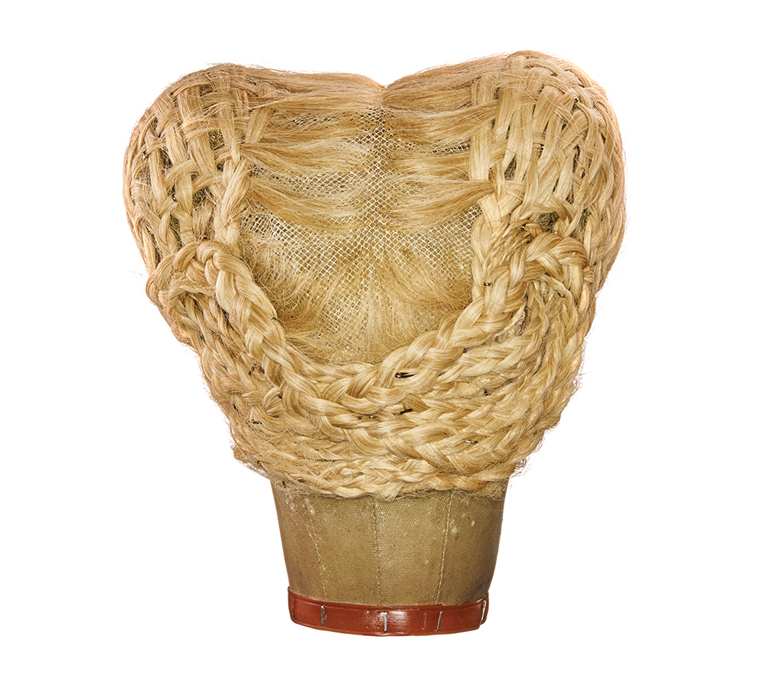 Masquerade Guest, Romeo and Juliet, 2017
It’s amidst partygoers dancing in lavish dress and hair styles such as this that Romeo and Juliet fall in love, only to realize shortly after that they’re from dueling families. Because the Guthrie’s 2017 production was set in modern times, it only required nine wigs, most of which were for the masquerade scene. 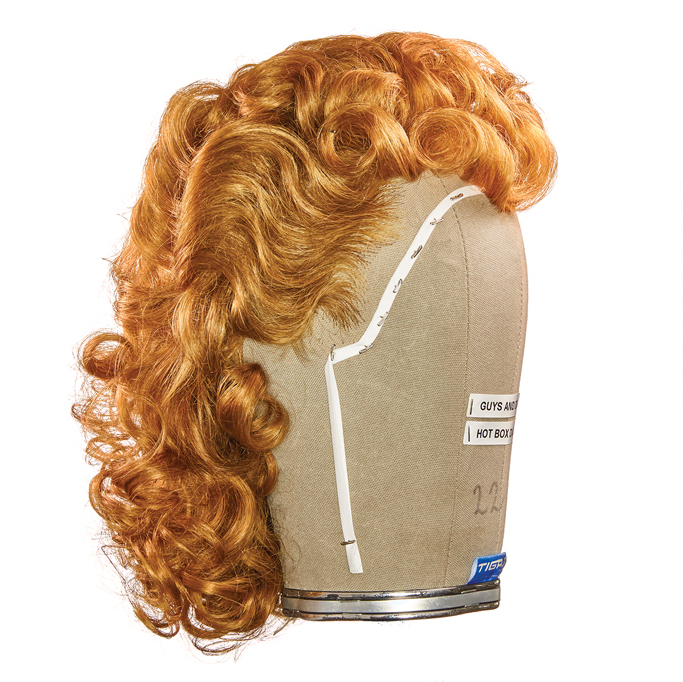 Hot Box Dancer, Guys and Dolls, 2019
This musical about gambling in luck and love in 1950s New York has an energy to match. In one scene, singer Adelaide teasingly performs “Take Back Your Mink” at a nightclub as she and her dancers shed clothing. (The scene required creative placement of some of the actresses’ microphones: They’re hidden inside some of their wigs.) 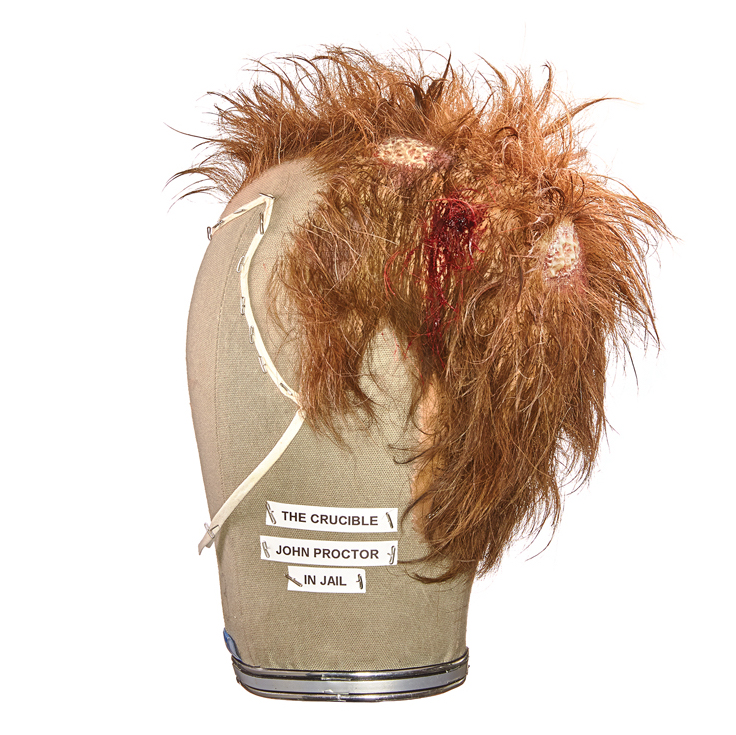 John Proctor, The Crucible, 2015
Arthur Miller’s 1953 play, inspired by McCarthyism, is set during the Salem witch trials. Because the character John Proctor spends months in jail, his wig includes silicone scabs and faux blood (a commercial product made of corn syrup with peppermint flavoring in case it’s accidentally ingested by the wearer). 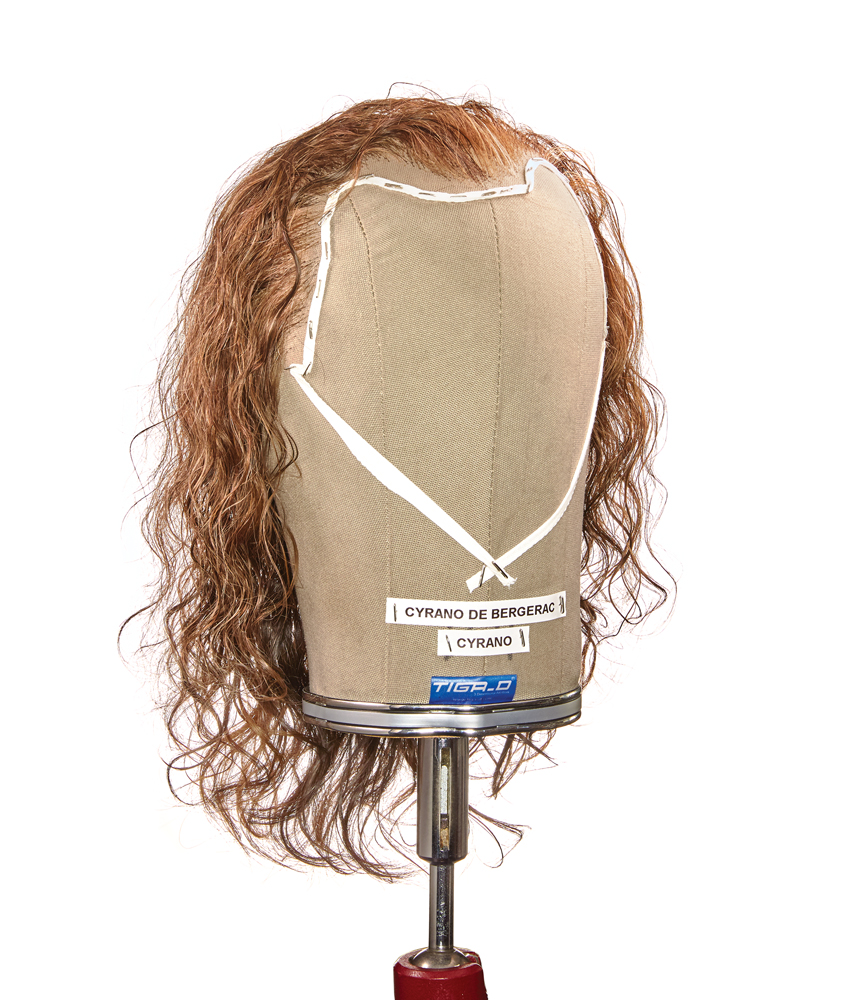 Cyrano, Cyrano de Bergerac, 2019
It took a team of 11 people to make an impressive 37 wigs and 16 sets of facial hair for this production of an 1897 romantic comedy about learning to appreciate the beauty within. The wig team was also in charge of producing a key plot element: a silicone nose. 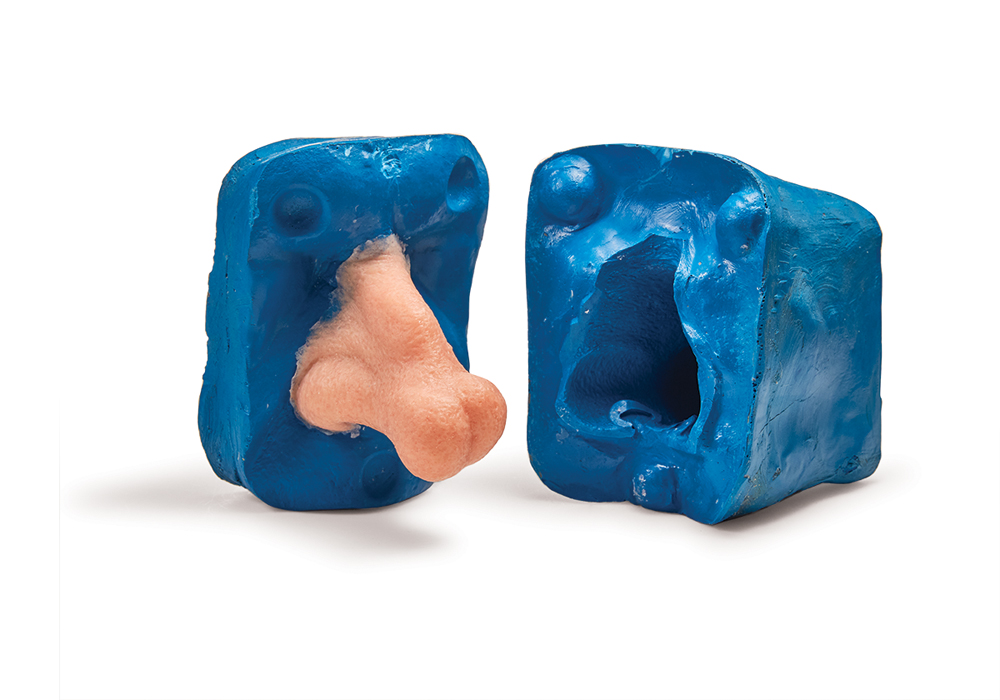 Cyrano’s Nose
This feature plays a vital role in the story, as Cyrano’s grotesquely large nose prevents him from declaring his love for Roxane. It was poured fresh for every performance by the wig team, using molds they created with the help of makeup artist Crist Ballas. A bonding agent kept it attached to actor Jay O. Sanders’ face through an active performance that involved multiple swordfights and costume changes.

At the Guthrie, wigs are built from scratch “in virtually the same way they were in Shakespeare’s time,” says Stearns. Here are the basic steps her team follows.

Step 2: Lift off the taped and marked plastic (called a “head wrap”) and place it on a model of a head (a “wig block”). If necessary, use cotton batting to pad the block in the shape of the performer’s head and secure it with tape. This becomes the mold from which the wig will be built.

Step 3: Drape pieces of netting and/or lace over the mold to build the wig’s foundation layer. Pin the foundation elements down with t-pins and small headless nails called points. Use thin Swiss lace at the front to create a seamless transition between the wig’s hairline and the performer’s forehead.

Step 4: Use a ventilating needle (a hooked needle also known as a “knotting hook”) and invisible thread to stitch the netting and/or lace pieces together. First use small darts and gathers to help shape the netting and create a close fit around the wig block, then stitch together the netted foundation to reinforce it.

Step 5: After the wig’s foundation is complete, use a ventilating needle to tie hair into the netting, a process similar to latch-hook rug making. Use larger needles on the back of the wig, and smaller, finer needles on the often highly visible hairline. In some wigs, tracks of hair called wefts are machine-sewn onto the foundation.

Step 6: Style the wig by taking into account the play’s time period and plot as well as the character, any allergies or chemical sensitivities the performer may have, and weather conditions such as humidity, which can affect hair unpredictably. Restyle the wig after each performance, ensuring visual consistency between all the shows in a run.