For jeweler Carin Jones, gathering materials is an art in itself.
Reserve Your Tickets Today 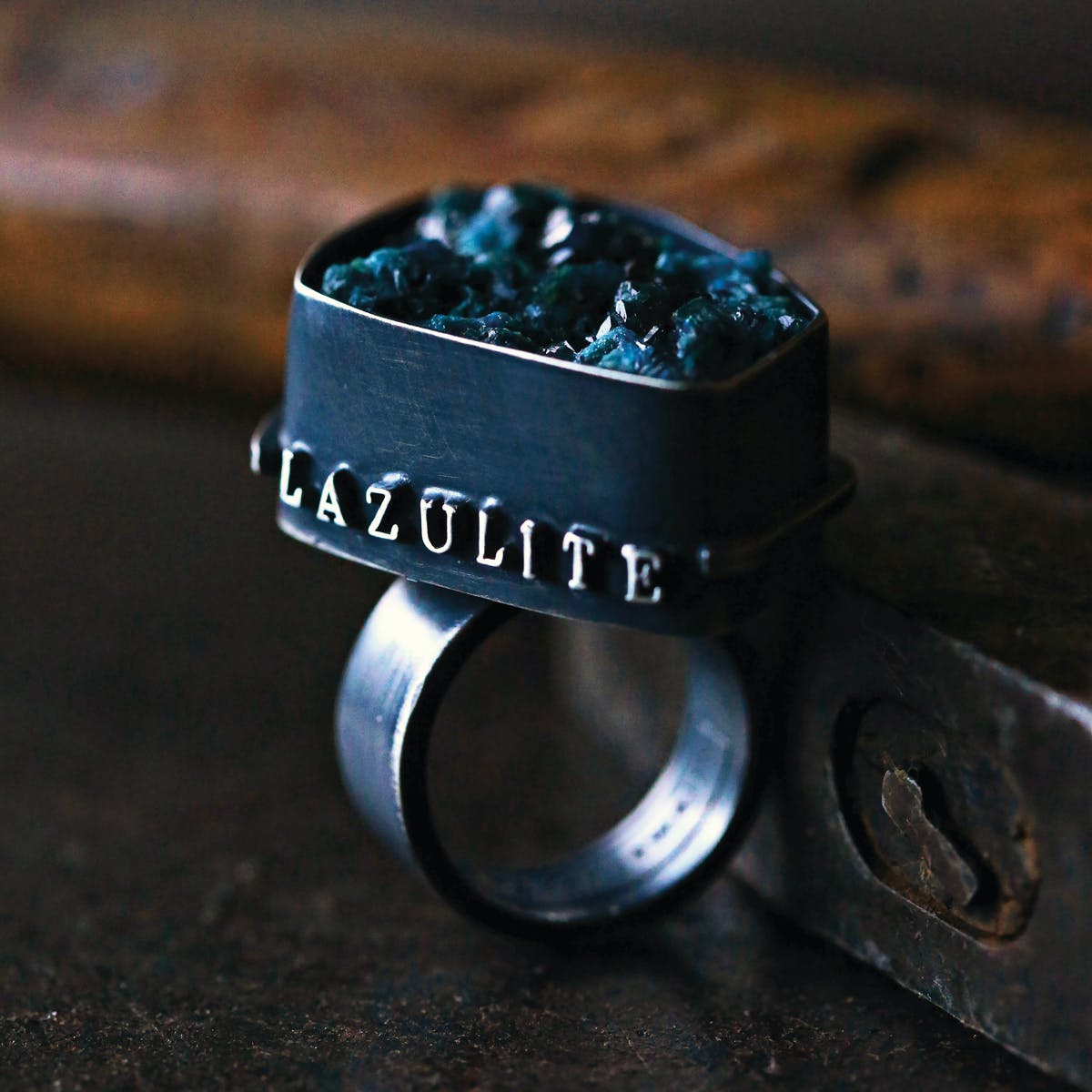 Hand forged from sterling silver with 18k detail, this ring from the Specimen series includes lazulite and her signature typography. Photo courtesy of Carin Jones. 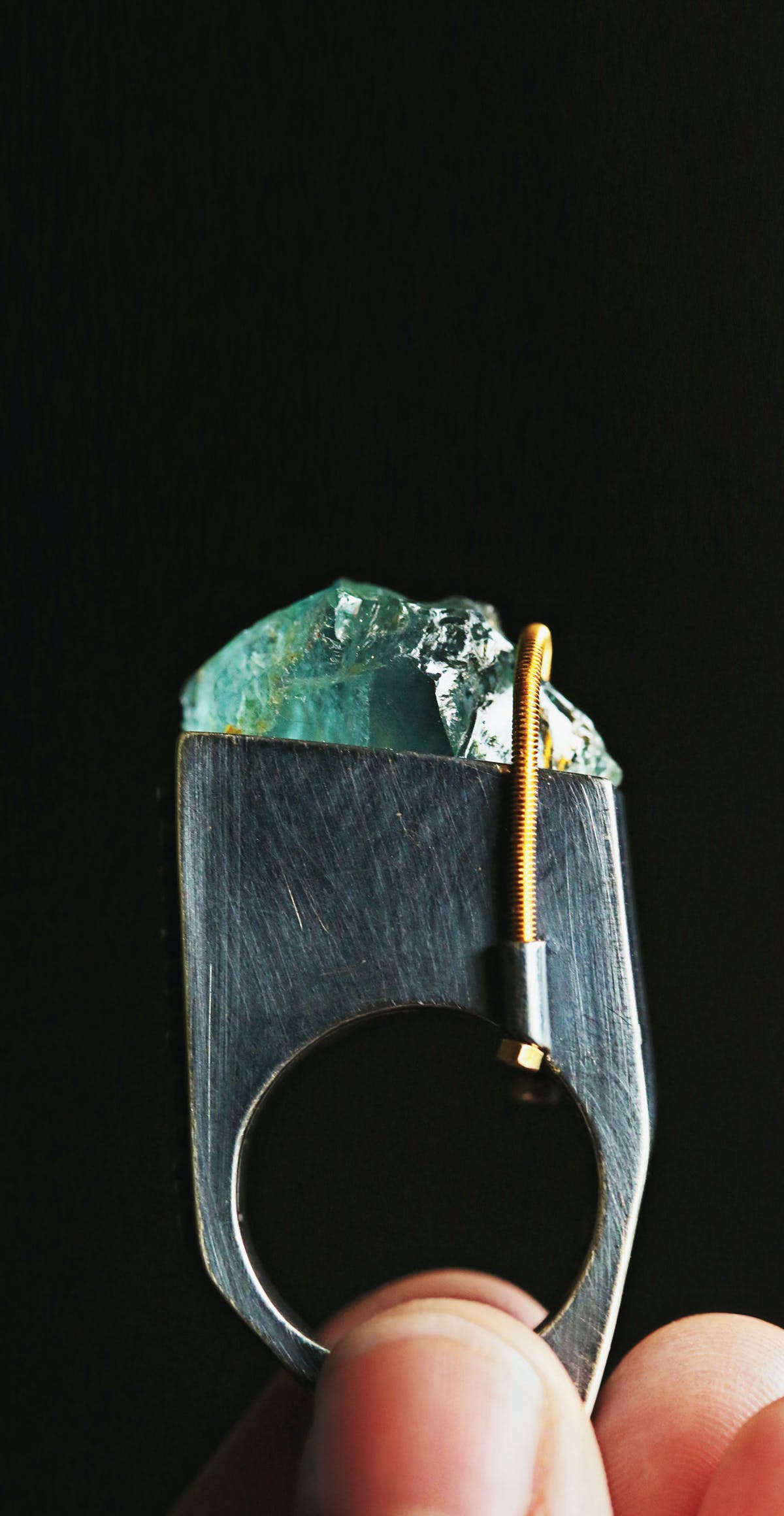 as a full-time artist for 11 years but still has a hard time calling herself one. “I don’t envision an idea and make it come to life,” says the jeweler who lives in Kingston, Washington, and whose work is inspired by the beauty of the Pacific Northwest. “I let the materials direct me. I gather all these things and wait for them to tell me where they want to go. I’m just an assembler.”

Her influences feel like an assemblage, too. She grew up watching her father, an architect, draw. “One of my earliest memories is sharpening his Prismacolor pencils,” says Jones, whose mother is a scrapbooker and “very crafty.” Jones herself has a zoology degree and worked for a time as a zookeeper, and that background in science informs how she works.

“I try and resolve design issues as simply as possible. Bolts, for example, are very functional. I look for the simplest way to put things together,” she says. But the intention goes deeper. “What I’m after is beauty in simplicity—stones that aren’t cut, rotting leaves. The kind of stuff that people don’t usually look at and find beautiful. My goal is always to get them to look harder.” 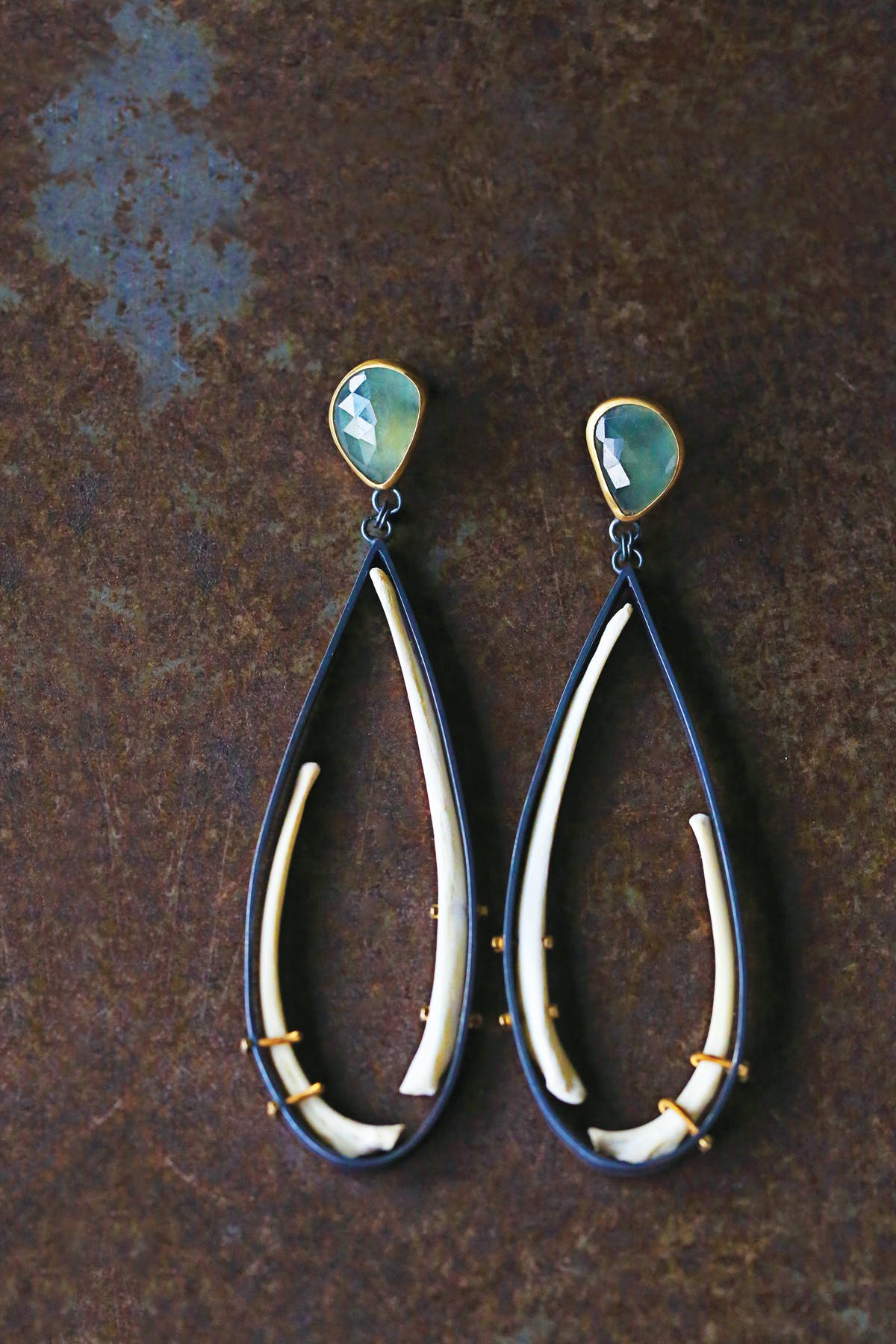 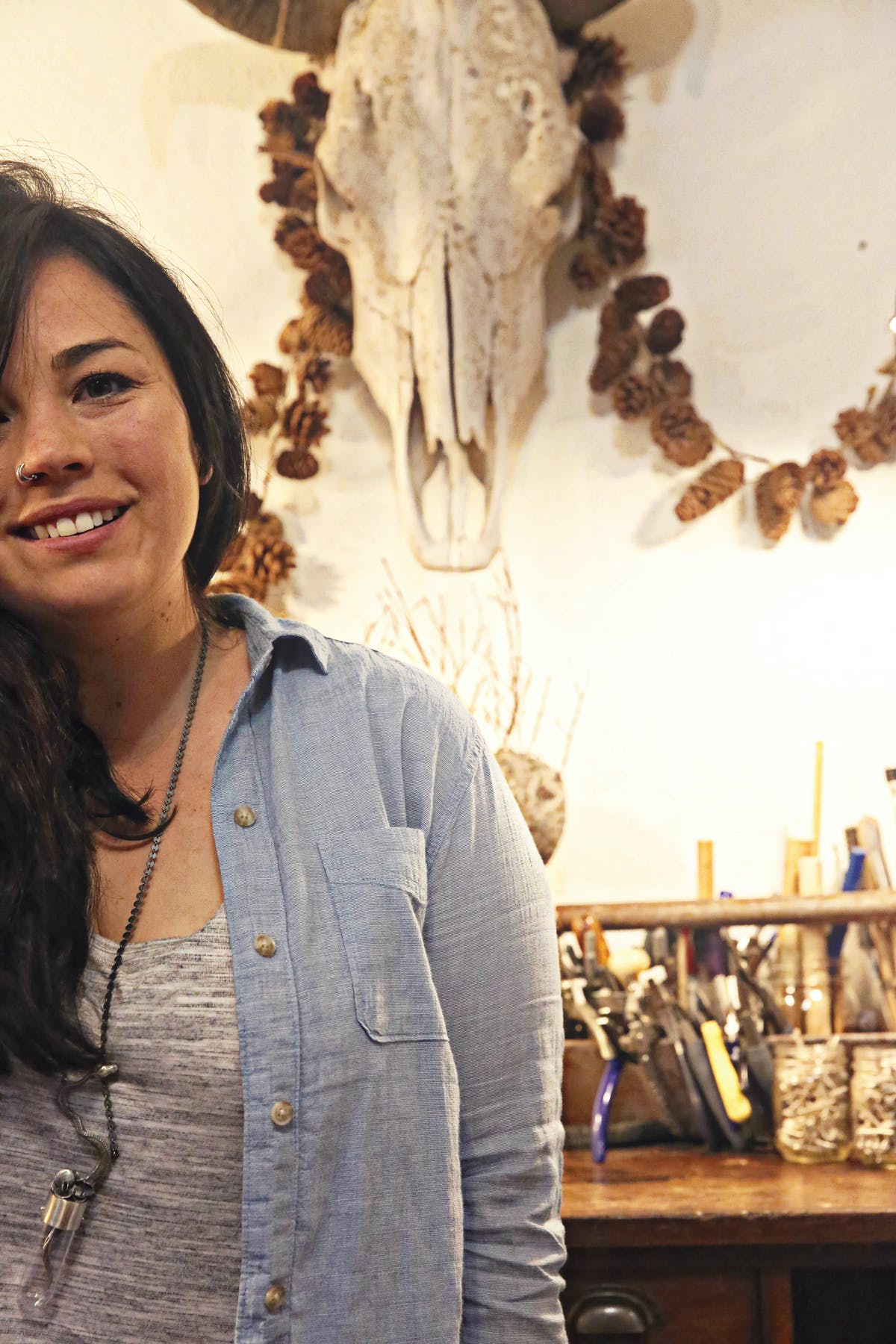 LEFT: Carin Jones assembled these earrings from the Of Mineral and Marrow series from bobcat ribs, sapphire, 23k gold, sterling silver, and gold-plated bolts that appear frequently in her jewelry. RIGHT: Jones in her studio. Photos courtesy of Carin Jones.

Jones, too, looks harder. She finds the organics she uses in her casting work in her yard or on walks. When she’s buying stones, say at the Gem and Mineral Show in Tucson, Arizona, she searches for the rough-cut and natural. “I love a faceted cut,” she says, “but the stone was pretty as it came out of the earth.”

Sourcing bones is tricky. “The laws around bones are strict. To be moral, I follow them and I believe in them,” says Jones. She buys properly cleaned bones from a person who raises rabbits for meat and who also has a permit from the US Fish and Wildlife Service to sell wildlife bones. 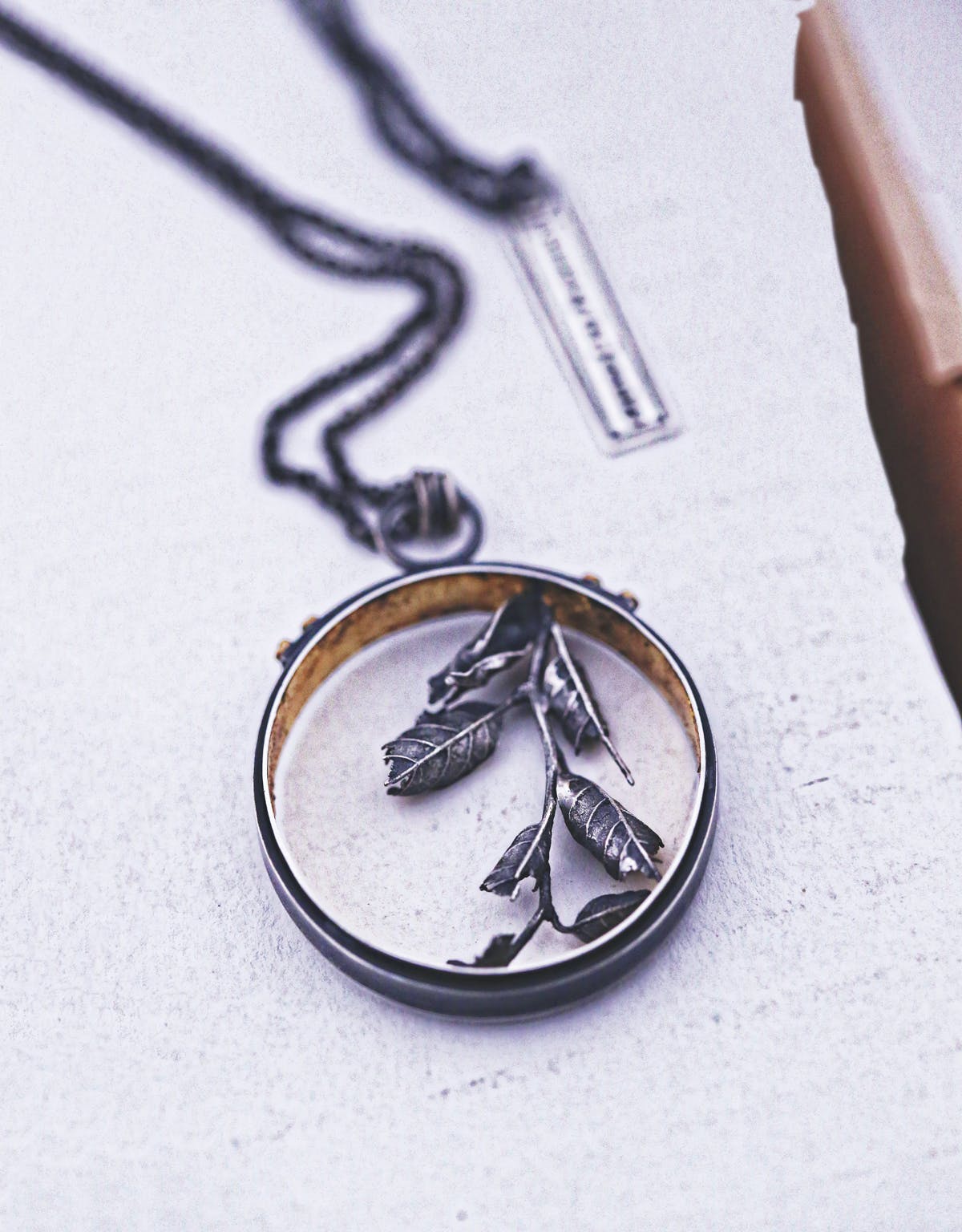 LEFT: This necklace from the Naturalist series has a multilayered sterling construction with decaying leaves at its center. Jones uses an ancient Korean gilding technique called keum-boo to create layers of 23k gold. RIGHT: Part of the Specimen series, this necklace features a bumblebee cast in sterling silver inside a Pyrex glass dome by Ali VandeGrift. Photos courtesy of Carin Jones. 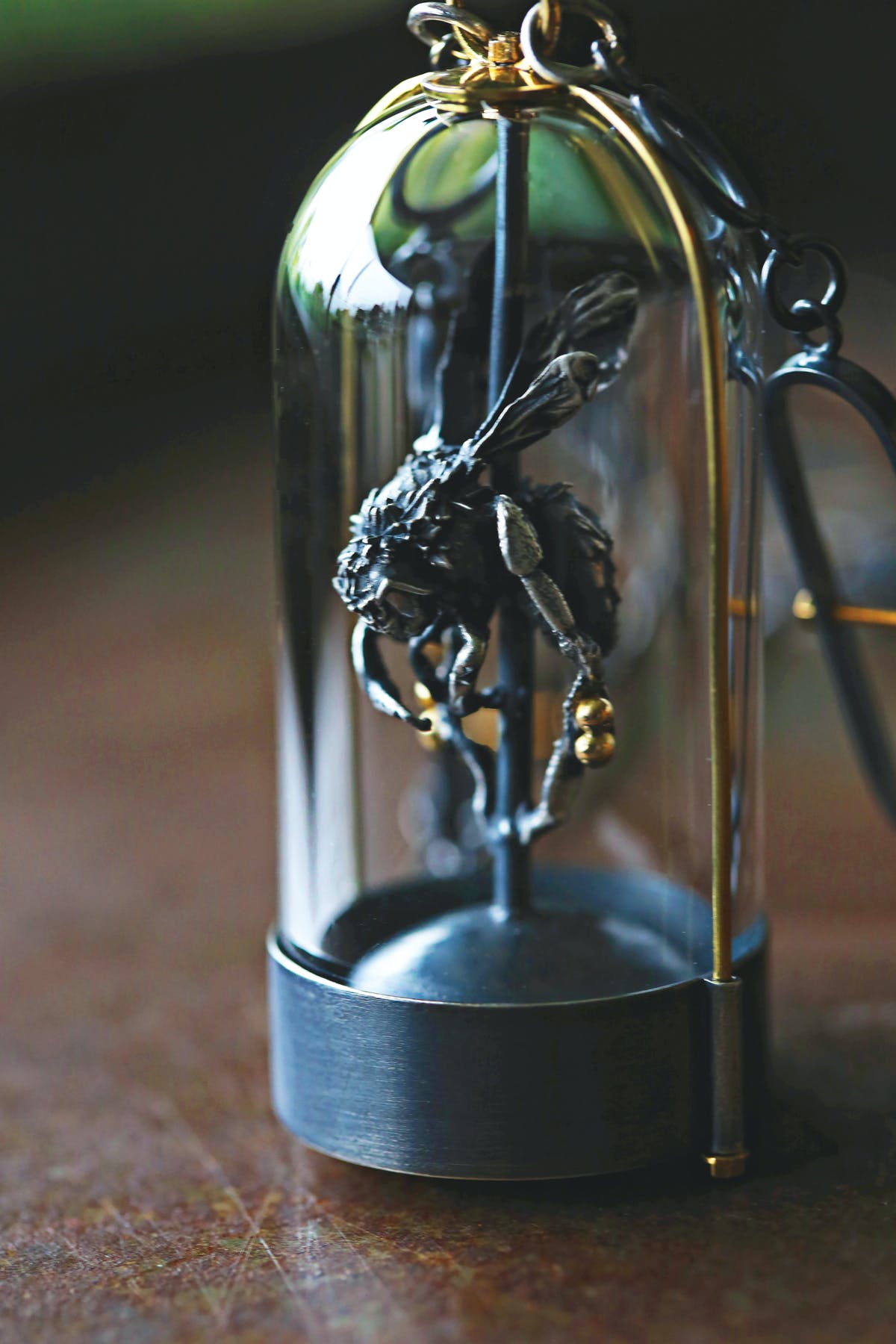 Sometimes Jones shapes her pieces with her hands; other times she uses the app Concepts, which allows her to layer photos of gathered materials to create her designs. Whenever she has made enough pieces in a similar vein, she names them as a series, such as Naturalist, Specimen, and Of Mineral and Marrow. With her jewelry, which feels so organic, all the pieces seem put together the way they were meant to be. 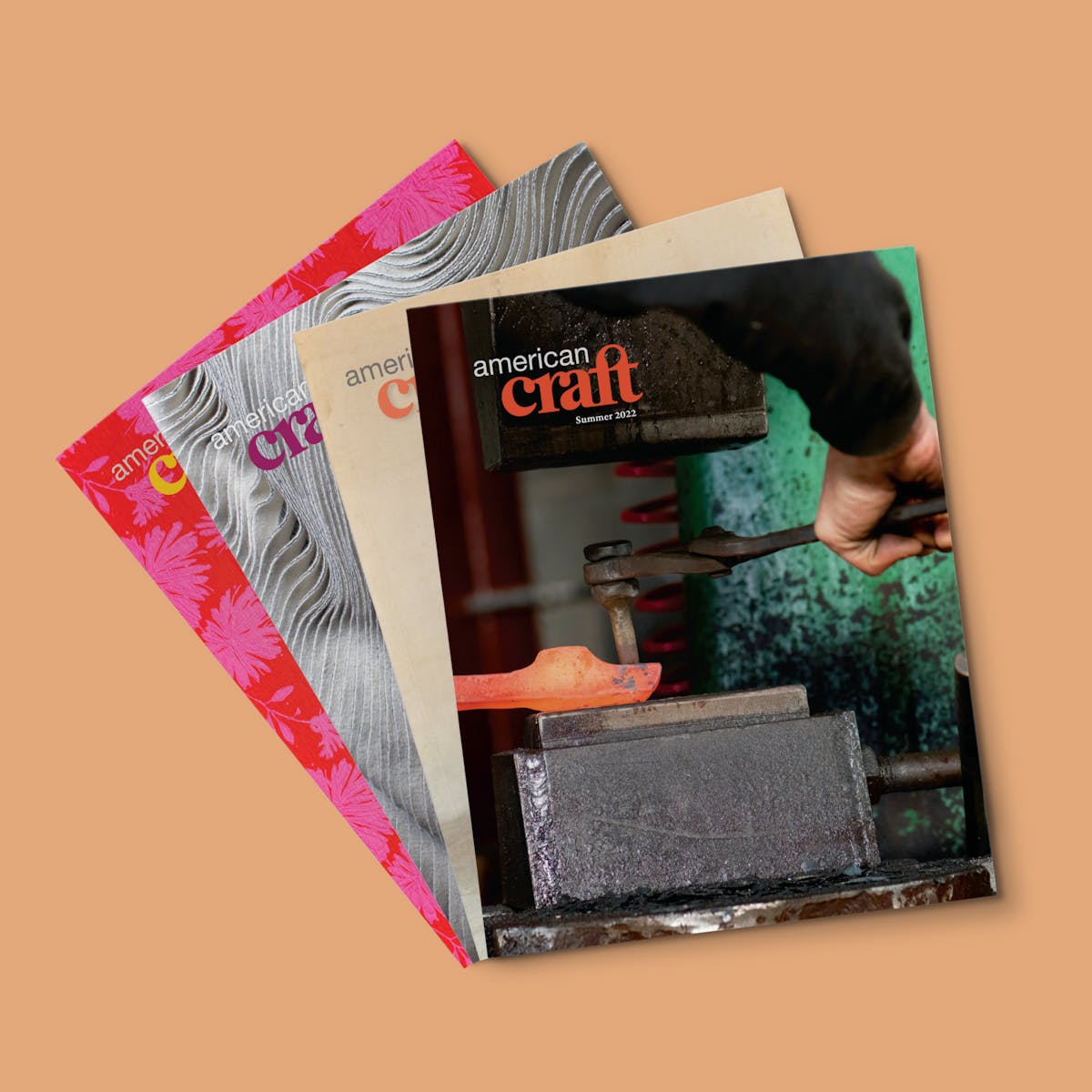 Carin Jones is the Washington-based jeweler behind Jonesing for Jewelry and a featured artist in the Summer 2022 issue of American Craft. In The Queue, she reflects on her zoological background, her favorite tool, and what she’s been watching.