Ruth DeYoung Kohler II’s legacy of supporting visionary outsider artists continues with the opening of a showcase for their built environments.
Reserve Your Tickets Today

(JMKAC) after its June 26 opening, they’ll see something that looks like a cross between a contemporary art museum and a very odd forest.

Situated about three miles west of the JMKAC’s main location in downtown Sheboygan, Wisconsin, and designed by the innovative Denver architecture firm Tres Birds, the blocky, irregularly shaped three-story Art Preserve building is clad in massive, plank-like wooden pillars set at slightly different angles, some of them over towering glass walls. It’s a promise of the off-kilter imagination that’s at work inside the building, and a reference to the fact that much of what’s on display was built to be outdoors, among trees, fields, and streets.

The Art Preserve displays the Kohler collection of artist-built environments, or “spaces that have been significantly transformed by an artist to embody and express aspects of their history, place, or culture.” Most of them were created by self-taught, visionary “outsider” artists—without art-school diplomas, but with a passionate commitment to making art on their own terms—so they could surround themselves with physical manifestations of their unruly imaginations. The environments run the gamut from the intricately daubed and decorated “Beautiful Holy Jewel Home” of Mississippi farmer Loy Bowlin (aka the “Original Rhinestone Cowboy”) to a re-creation of Chicago imagist artist Ray Yoshida’s brilliantly decorated apartment. 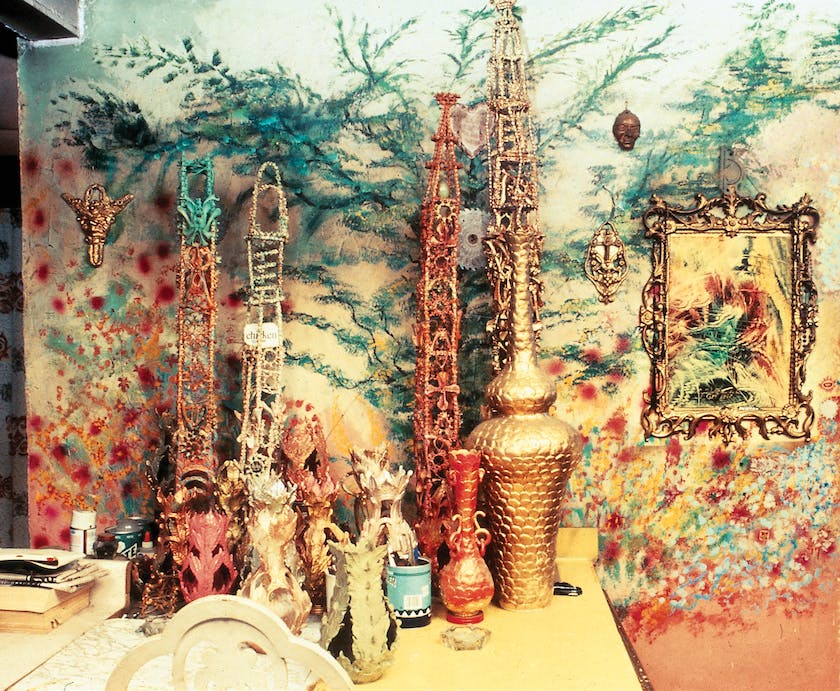 The JMKAC has been collecting these idiosyncratic environments, and displaying some of them, since the 1980s, when Ruth DeYoung Kohler II was the center’s director. When she retired in 2016, and until her death in November 2020, she gave her full attention to creating a purpose-built showcase and storehouse for them. It’s the culmination of a fascination and commitment that started more than 50 years ago.

In 1969, when Ruth was assistant director of the John Michael Kohler Arts Center, she met the retired lumberjack and self-taught musician and artist Fred Smith and toured his Wisconsin Concrete Park. This astonishing assemblage on Smith’s land near the hamlet of Phillips features 237 figures in concrete, wire, and shards of mirror glass, depicting characters from local, regional, and American history and legend, along with creations that came straight out of Smith’s imagination. Ruth was overwhelmed by it, and the experience launched her crusade to bring recognition and preservation to the work of outsider artists.

When a storm severely damaged the Wisconsin Concrete Park in 1977, Ruth pulled together support from the National Endowment for the Arts, the state arts board, private funders, and the Kohler Foundation to have Smith’s magnum opus professionally restored and donated to the county as a public park the following year. “In the seven-year period between 1969 and 1976,” says Sam Gappmayer, director of the JMKAC, “Ruth developed a really close friendship with Fred Smith, and that friendship, along with her appreciation of how compelling the artwork was, really drove her interest in preserving that site.”

This success led the JMKAC and the Kohler Foundation to join in further restoration efforts near home—a hand-built cabin with concrete frontiersmen and patriotic figures by James Tellen (1880–1957) not far from Sheboygan, for example, and the wall and ceiling murals by Ernest Hüpenden (d. 1911) in a clapboard lodge in the Amish village of Valton, Wisconsin. The Arts Center/Foundation partnership went on to restore many other environments, including the Chauvin Sculpture Garden in Louisiana and Pasaquan, the riotously colorful visionary complex assembled in Georgia by Eddie Owens Martin, who dubbed himself “Saint EOM.”

The restoration work goes on. “Somebody will call us or the Foundation and say, hey, I just saw an amazing environment, it needs to be preserved,” says Gappmayer. “The Foundation then is sort of handed the football, and they investigate the site. They involve our curatorial staff. There are lots of conversations and lots of criteria they use to make assessments of whether the site can be preserved in situ, and whether there’s an entity near the site that could be a steward for it once it’s restored.” 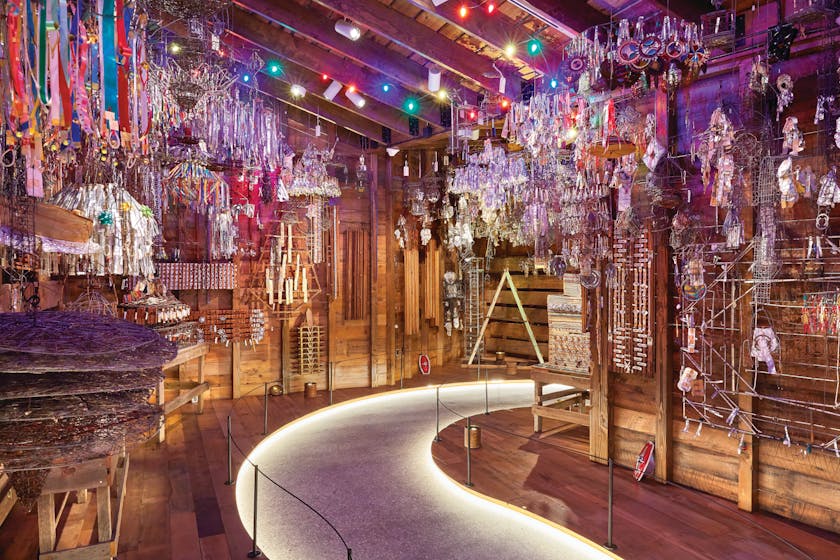 Then, if possible, he says, the Kohler Foundation restores the site in situ and makes a handoff to the stewarding organization, which might be a university, a museum, or another similar institution. “If the site cannot be preserved in situ, then they collect the objects, do the restoration on them, and work with us in getting them placed in our collection or in other collections around the country.”

The JMKAC’s own collection is dominated by individual artworks from artist-built environments, as well as the work of academically trained artists who take part in Kohler’s Arts/Industry residencies (see page 50). But since the early 1980s, the Center has been working more and more to collect, reassemble, and replicate entire environments. And that effort, too, was the result of one of Ruth’s encounters and epiphanies.

In 1983, she visited the home of self-taught artist Eugene Von Bruenchenhein, near Milwaukee. “Without doubt, that first visit was the most astonishing and moving experience in the arts that I have had,” Ruth wrote in an exhibition catalogue in 2007. “Surrounded by relief heads of painted concrete—Asian warriors and royalty that served as sentinels—the Von Bruenchenhein home was painted inside and out in large shapes of vibrant colors. . . . The tiny foyer was stacked floor to ceiling with Kentucky Fried Chicken boxes filled with chicken bones from a nearby restaurant’s refuse—all to be used for Eugene’s exotic thrones and towers. . . . [S]eeing the immensity and power of Eugene’s output left me forgetting to breathe.”

It was Ruth Kohler’s encounter with the artist’s overwhelming oeuvre that set her on the track of collecting entire environments. She started with Von Bruenchenhein, who had died earlier that year. Ruth wanted not only to preserve his work, but to present it in a way that embodied the overwhelm and amazement she had experienced. The JMKAC acquired no fewer than 6,000 Von Bruenchenhein objects, including photographs, paintings, and ceramic and bone sculptures. “That was in 1983,” says Gappmayer, “and in the past year or so we’ve acquired an additional 8,000 pieces.”

Now, one of the most significant installations at the Art Preserve is a re-creation of Eugene Von Bruenchenhein’s home in Milwaukee, housing some of his pinup-style photographs of his wife, Marie; his riotously colorful paintings; his chicken-bone sculptures; and other works. More of the collection’s approximately 14,000 Von Bruenchenhein items are presented on racks and in storage cabinets.

“Without doubt, that first visit was the most astonishing and moving experience in the arts that I have had. . . . [S]eeing the immensity and power of Eugene’s output left me forgetting to breathe.” —Ruth DeYoung Kohler II

The Art Preserve will open with the work of more than 35 artists. On view in Nebraska artist Emery Blagdon’s space is The Healing Machine, built of wire, tape, sheet metal, aluminum foil, minerals, and oddly assorted mechanical parts, and intended to channel the earth’s electrical energy to cure human ailments. Among the “trained” makers showcased is pathbreaking fiber artist Lenore Tawney, via a re-created studio environment chockablock with objects that inspired her: furniture, her own and others’ artwork, eggs, feathers, bones, and rocks.

Designed with differently shaped spaces, intriguing nooks, and surprising vistas, the building was built to highlight the art. Its wooden pillars are functional—they create forestlike shade to protect the works from overexposure to sunlight. The Preserve is also designed for dialogue and learning, says JMKAC director Gappmayer. Storage areas are visible to the public. Newly commissioned artworks respond to the environments on display.

“We brought in composers whose work is connected to the idea of healing, to do work inspired by Emery Blagdon,” Gappmayer says. “Over the next year, we’ll create opportunities for people preserving, interpreting, or exhibiting work by self-taught artists to gather. We see an opportunity to become a locus for conversations about those topics going forward.”