The mother-daughter team talks about collaborating across generations.

It isn’t every day that you meet a mother and daughter who are friends as well as relatives. Even less common is to learn that their friendship has blossomed into a thriving artistic collaboration. But Portland, Oregon, multidisciplinary artists Wendy Red Star, 37, and her daughter Beatrice Red Star Fletcher (who turns 11 in June) aren’t your average duo. Together they’ve exhibited at the Portland Art Museum, performed at the Tacoma Art Museum in Washington, and shared a residency at the Denver Art Museum.

In works ranging from staged portraits to performances, the pair celebrates their Apsaalooka (Crow) heritage while recasting colonial narratives. They share a love of research and history as well as a witty sense of humor. But they also have individual strengths and interests. Wendy sews and curates and is collaborating with Seneca artist Amelia Winger-Bearskin on a virtual reality piece this summer. Bea, who has always called her mother Wendy (“You’re so cool that I’m too scared to call you 'mom,'” she jokes.), loves to draw and interview "mostly female comedians" on her podcast Bea's Big Laughs. (Recent guests include Carrie Brownstein, Abbi Jacobson, and Weird Al Yankovic.)

The artists took a moment out of their busy schedules to chat with me about what they’ve learned from working together.

How did the two of you begin collaborating at a professional level?
Wendy: [After my divorce,] I was working full-time for a nonprofit arts organization and thinking about how torturous it was to feel like I was sacrificing a lot in terms of not being able to hang out with Beatrice as much as I wanted to, and also having to say no to art things that I wanted to do. When I got laid off a few years ago, I realized I can make this structure what I want it to be, and that’s going to include my family.

How do these projects take shape?
Beatrice: Well, what usually happens is, Wendy will tell me, “Hey, I’ve got this show. Do you want to do something?” And I come up with an idea for that without her; Wendy maybe helps me tweak it.

Wendy: Yeah, it happens in a variety of ways. For instance, the Tacoma Art Museum approached me [to do a project in 2015] with the Haub Family Collection, which is a Western art collection. The museum has done this really great job, where they see the flaws in the collection in that it excludes the Native perspectives. So they’ve invited Native artists to come and interact with it. I was trying to figure out, how can I engage with this type of work? I’ve never really been interested in Western art. So I decided to do a project with Bea. We would do a performative tour – really use how the public steps into an institution and takes everything at face value without really questioning anything. So I was a tour guide, and Bea was this muse who selected different paintings in the collection. It was basically like a live history event, where Bea dressed up as the characters in the paintings. We had fake artifacts and things like that. And I would go ahead and say factual things, but I would also add in alternative facts. It was really interesting. You could tell that some of the audience members were very confused. And you could tell that some of them thought, “This is totally legit.”

In 2016, we were invited by the Denver Art Museum to do an artist residency. That was our first residency, and [a sign that] people were starting to recognize our work as a team.

Beatrice: When we were there, we were figuring out things that we could do, like Wendy made a [photographic] backdrop. I was trying to figure out what I wanted to do. There were all these people giving tours, but they were all adults giving tours to kids. So I decided that I’d lead my own tour because I was 9, and that can be considered a kid. I did two on the Native floor and one on the Western. And it was like a regular tour. I went around, showing kids the artifacts, told them what they were, but I picked out my own artifacts and did my own research like a cool person would. 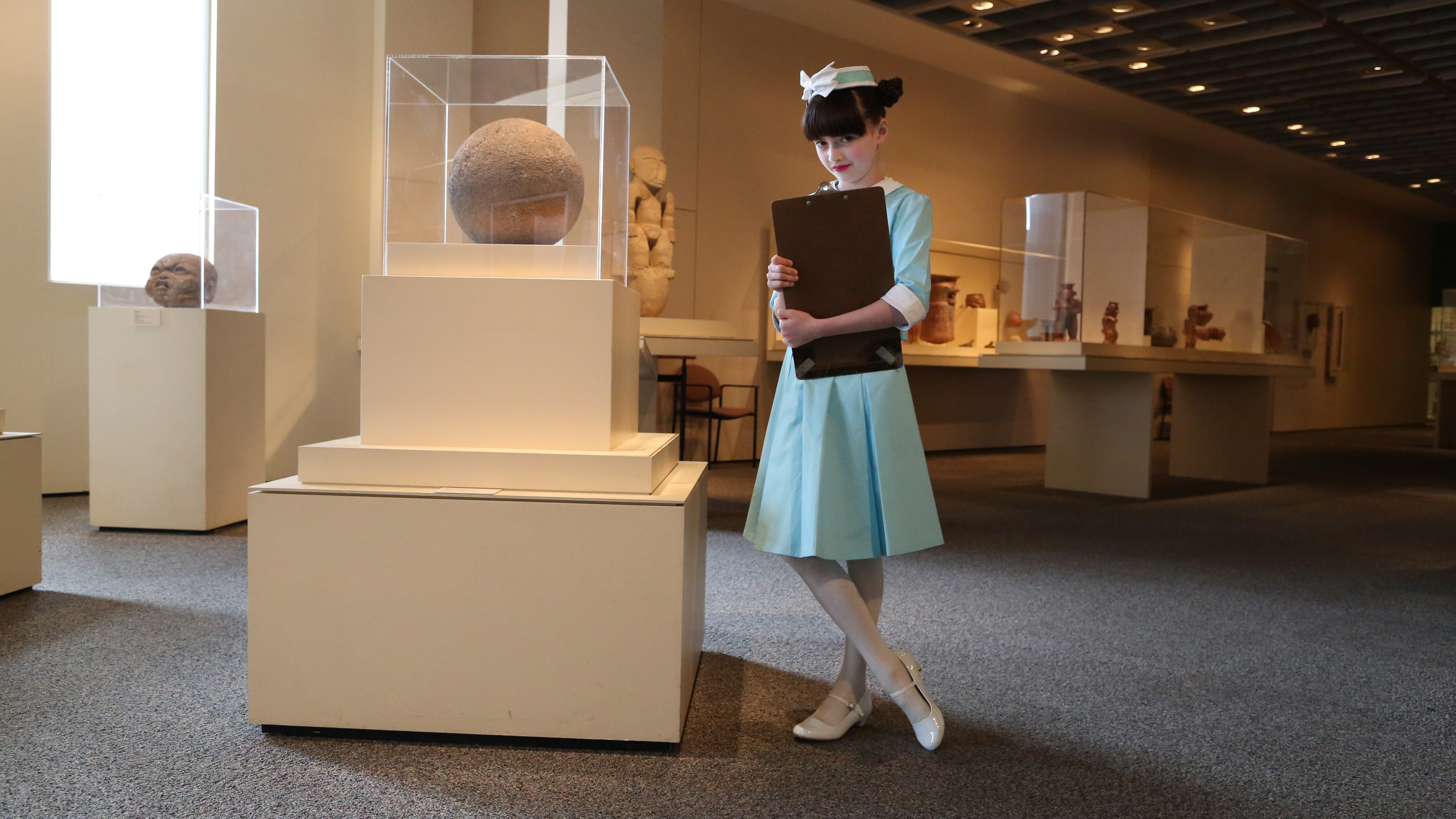 Wendy sewed this dress for Beatrice to wear while leading tours of the Denver Art Museum. Beatrice came up with the design. Photo: Courtesy of the artists

That’s amazing. It seems like you two work really well together. Do you find any aspect of your collaboration challenging?
Wendy: I recognize that I have to provide this really solid foundation for Beatrice to do everything that she’s great at and shield her from this outside – like administrative things. I found that’s the challenge for me; I want to make sure that when we are working together that Beatrice has the freedom to have these experiences without having that sort of stress. And then, also, a big challenge for me is just to have the ability to let go. It’s been great working with Bea because I never know what is going to come out of her mouth [laughs], and so I have to just have a lot of faith and trust; and I think she does the same for me.

Bea, what about you?
Beatrice: Well, I’m 10 years old, and I’m making art, and I’m in museums, doing stuff. Some people still think I’m just a kid following Wendy around – that she’s probably just taking me here because I’m her daughter, and she needs me to sit there. But I’m actually there to work, and I’m serious about my stuff.

Wendy: I think it’s something that all parents confront in one situation or another. “Oh, the child is the burden,” or “children don’t have a place here.”

Beatrice: If they don’t have a place, then why do people keep on making them? 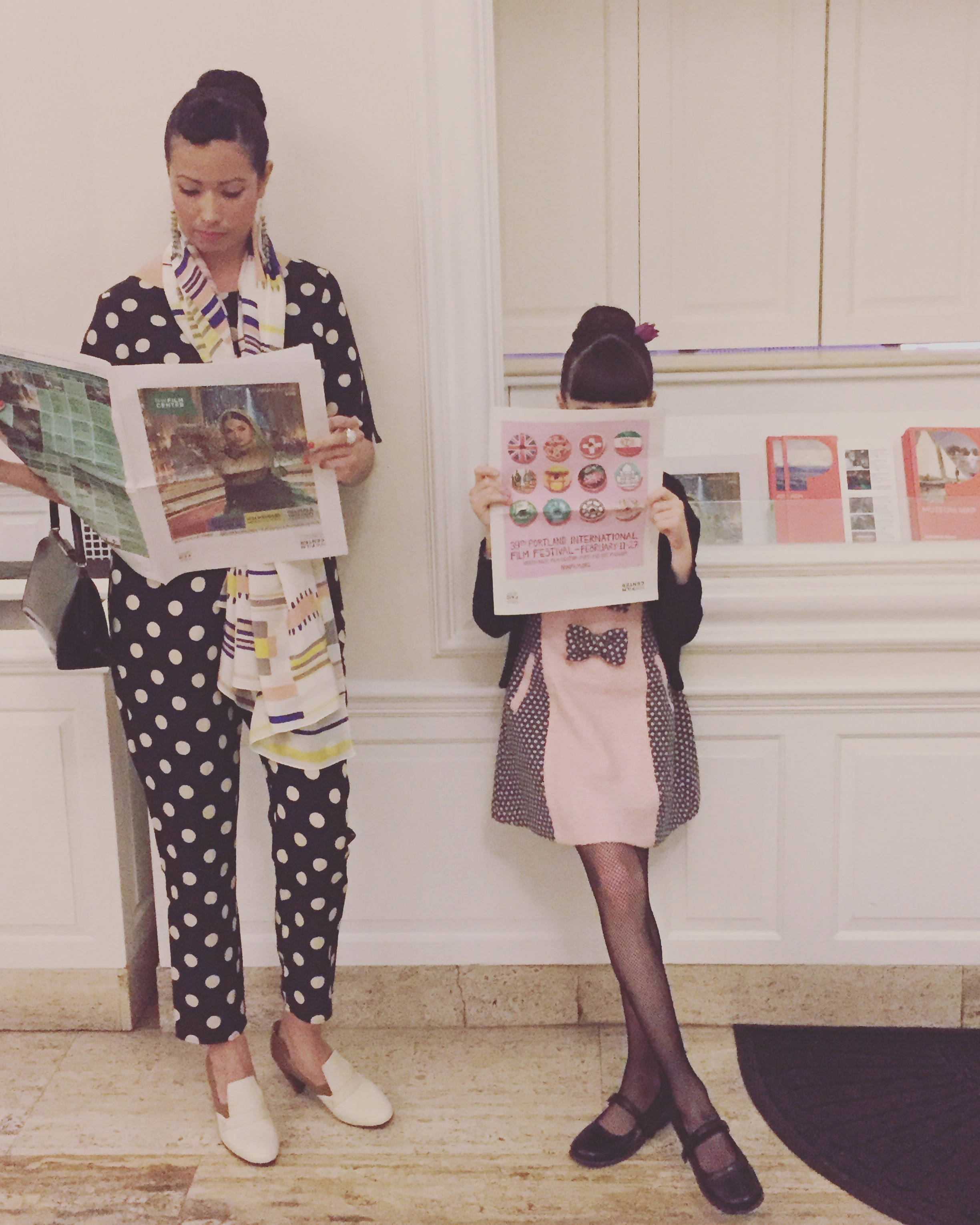 Wendy and Beatrice at the opening of the "Contemporary Native Photographers and the Edward Curtis Legacy" exhibition at the Portland Art Museum, 2016. Photo: Courtesy of the artists

Beatrice: But another thing I don’t really like – and I bet Wendy can relate to this one – is when there’s a project that you’re gonna do, and a place asked for it, but they’re gonna put you in a section that you don’t like. Let’s say we have a photograph and they ask to put it in the Native section, but we consider it more of a contemporary piece; but they think, just because we’re Native, it has to be considered a “Native” piece.

Wendy: You, at your age, are already thinking about these things. You’re gonna just be so much further ahead.

Have you learned stuff from your mom that has helped you develop as an artist, Bea?
Beatrice: Well, I’ve learned a lot of art stuff from my mom, like if you’re going on a trip, you need to always make sure that you’ve got everything you need for any emergency. And she taught me stuff about formatting. Oh, she also teaches me how to make those things where you talk about yourself and what you are.

Wendy: Yeah, artist statements. She’s always taking the initiative, especially when it comes to Native identity. I’ve been really proud of her when I find out that she’s spoken to her class about Native history and things like that.

What about you, Wendy? What have you learned from Bea?
Wendy: I feel like I’ve learned to be really flexible and go with the flow. Working with Beatrice, I’ve realized that I can be slightly Type-A.

Beatrice: I’m Type Bea, get it?

Wendy: I realize that it’s better if I can be flexible and go with the flow. That’s been something that’s been really great – just not even in an art context, but in other things – recognizing that I tend to have this agenda, but that things can go in many different directions, and we can still end up where we need to be.

Do you ever argue when you’re working together?
Wendy: For us, there are a lot of unknowns – in the artwork itself and in what we’re doing, and then, also, traveling to new places and working with different people and institutions. I feel like, if there is any tension, it comes from me trying to be the buffer to the unknowns. And sometimes I can get stressed out, and then Bea will let me know that I’m not being so great.

Beatrice: I’m like, “We’re just here to have fun.”

Wendy: I love having this sort of open dialogue where we can tell each other, “Look, I recognize this is stressful or whatever, but the whole point of this is so that we can have fun and that we can work together.” 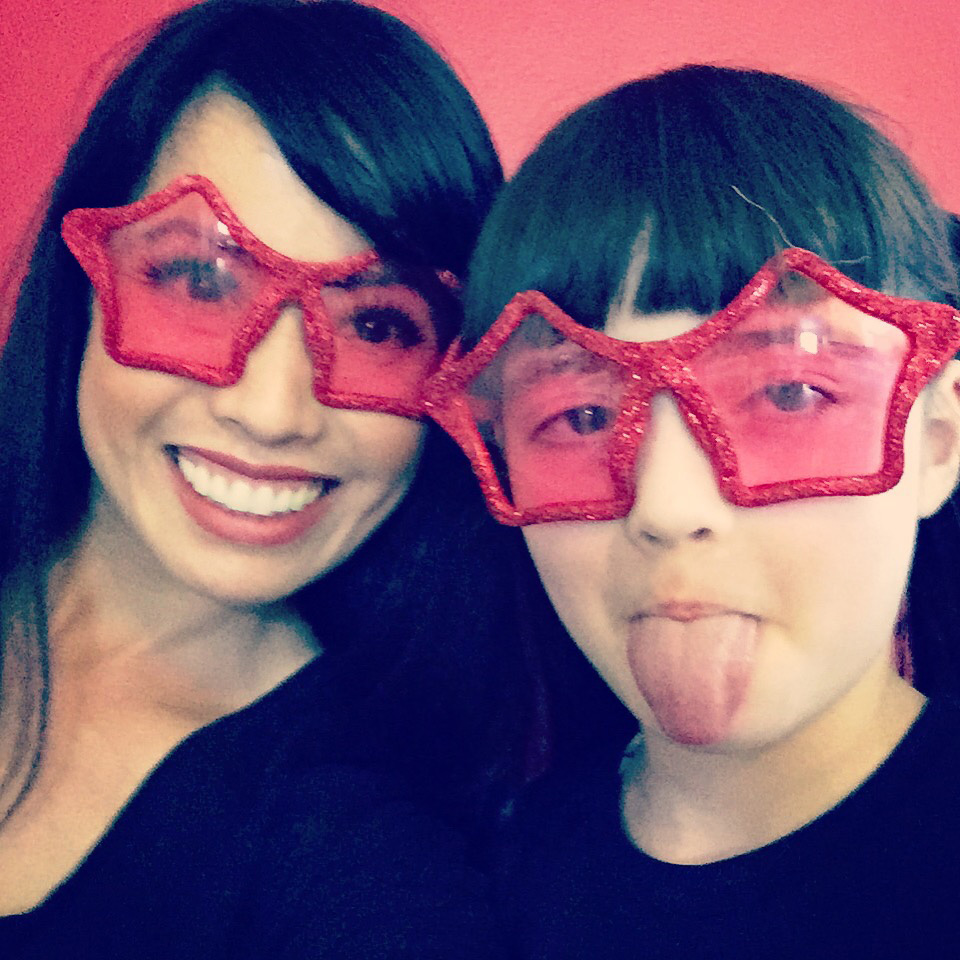 Wendy and Beatrice at their 2015 Audience Interactive Performance of the Haub Family Collection of Western American Art at the Tacoma Art Museum during its 6th Annual Northwest Native Celebration. The duo wore rose-colored glasses as a commentary on the collection's "rosy view" of history. Photo: Courtesy of the artists