A new half-season of the Netflix glass-blowing series brings a dose of spirited competition to the holidays.

even some of the contestants were, well, blown away. “On paper, glass reality TV didn’t sound like a good idea,” says Philadelphia-based glass artist Alex Rosenberg, a contestant on season 1. “It turned out that a lot of [the contestants] thought that, and a lot of us were wrong.”

In retrospect, glass-art-as-must-see-TV is a no-brainer. The craft has built-in drama (fires blazing! glass twirling and crinkling! artists rushing to and from their own personal glory hole!), suspense (will the glass break on the way to the annealer?), tragedy (the glass broke on the way to the annealer!), and characters you care about. Plus, there’s an athleticism—almost a choreography—to glassmaking that makes it hard to look away. “Glass work is like a sport,” says Rosenberg, who came in third in season 1 and was a guest evaluator on season 2. “It’s a performance-based art more than other arts, and with performativity comes an audience.” 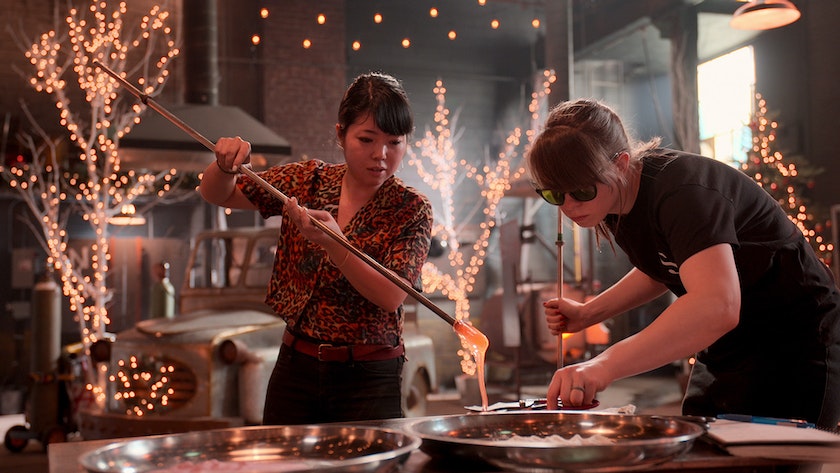 Indeed, audiences will rejoice to learn that Blown Away: Christmas premieres this Friday with five runners-up from the first two seasons, who will compete for charitable causes. The returning artists include Rosenberg; Seattle-based glass artist Nao Yamamoto; glass blower and co-founder of Esque Studio, Andi Kovel; artist Cat Burns, who was the first runner-up on season 2; and Tacoma Glass Blowing Studio glass instructor Edgar Valentine. 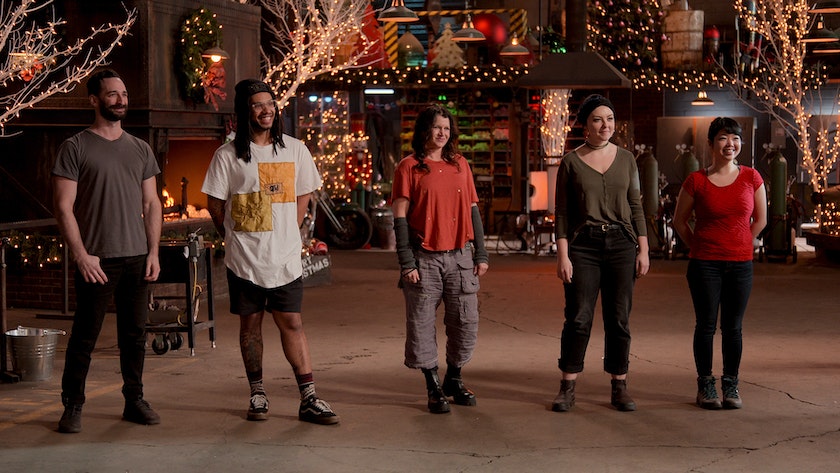 “It was really an honor to be included,” says Kovel, who describes season 2 as more competitive than the holiday special. “The whole vibe for the Christmas special was more playful and lighthearted. It was a lot more relaxed.”

But a more festive atmosphere on set didn’t translate into less of a challenge for the artists. In fact, the opposite was true—the Christmas theme led to a higher degree of difficulty. “There was a lot more energy spent in my approach to the briefs,” says Rosenberg. “The constraints were narrower because it is [a themed] show, so the question was, ‘Could I have my voice shine through those constraints, while also pulling out some stuff that hadn’t been seen before?’” 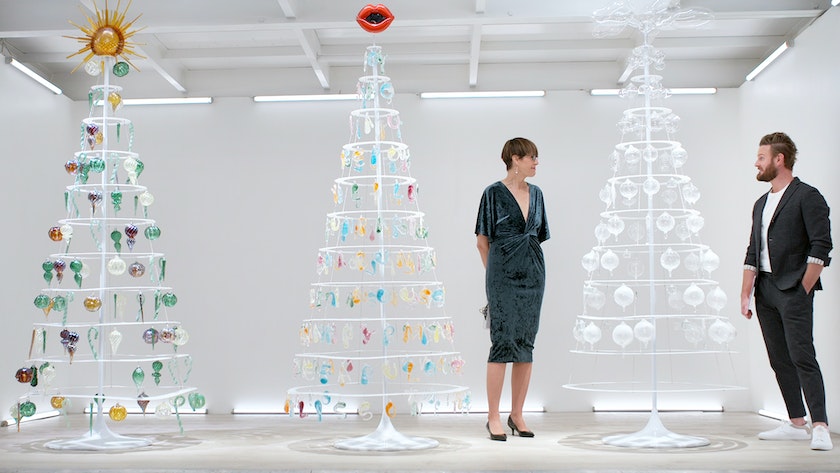 Hosted by Queer Eye star Bobby Berk and 2020 American Craft Council Fellow Katherine Gray, Blown Away: Christmas will be shorter than previous seasons, but no less rich in beautiful creations, friendly competition, and bite-your-nails, will-it-break moments. And while only one contestant will be crowned “best in glass,” they will all be treated with the reverence the show is known for. The producers and camera people “honor everyone,” says Kovel. “Everyone gets a hero’s entrance and a hero’s exit.”

Experience exciting new craft this winter and impart the season with a sense of wonder. Here are 17 exhibitions and other events happening across the country for you to explore.