Blacksmithing can be a hot and often sweaty job, and it was even hotter and sweatier at the biennial conference of the Artist-Blacksmith’s Association of North America, held the last four days of June, just outside Richmond, Virginia. To the rhythmic pounding of human- and machine-powered hammers and the roar of numerous forges, members braved unusually torrid weather to watch, learn, teach, and make. Among the highlights:

Whole lotta makin’ goin’ on
For this practical and action-oriented crowd, the conference was making-heavy, with opportunities for members of all skill levels; some sessions were open to students as young as 8. Visitors could try their hand at a variety of techniques and forge take-home projects such as tools both gentle and fierce (backscratchers to tomahawks), as well as make more decorative items such as a leaf key ring and animal heads.

Watch and learn
Teachers and demonstrators offered a huge range of techniques and perspectives. Jennifer Horn of Daisy Hill Forge, in the farriers’ tent came at it from her “efficient and effective” perspective, modestly stating that “I never considered myself an artist.” Though she does make horseshoes (themselves their own kind of art form), her disclaimer was belied by her table on display. (She also offered encouragement for other art-shy attendees such as reading Austin Kleon’s invaluable little volume, Steal Like an Artist.)

On the other end of the spectrum was Chris Shea, demo’ing techniques involved in his subtle Bough candelabra and discussing nuances of design with delightfully evocative asides – watch those curves so they don’t get “cloying,” he cautioned at one point. He even endorsed a Zen approach to finishing work, calling it “a little quiet time with your piece” – one way to lessen the tedium of the task.

John Medwedeff offered an equally valid counterpoint, reminding us that it’s OK not to love every last part of the process: “The tweaking and fitting and fussing – that’s the S.O.B. part of the project.” Medwedeff and team created a full-size abstract sculpture of rolled and pressed plate forms, based on a small maquette on display. Even as team members meticulously measured with calipers to ensure the right proportions, an exuberantly scrawled note on a nearby whiteboard reminded everyone of the ultimate goal: “Make some ART!” 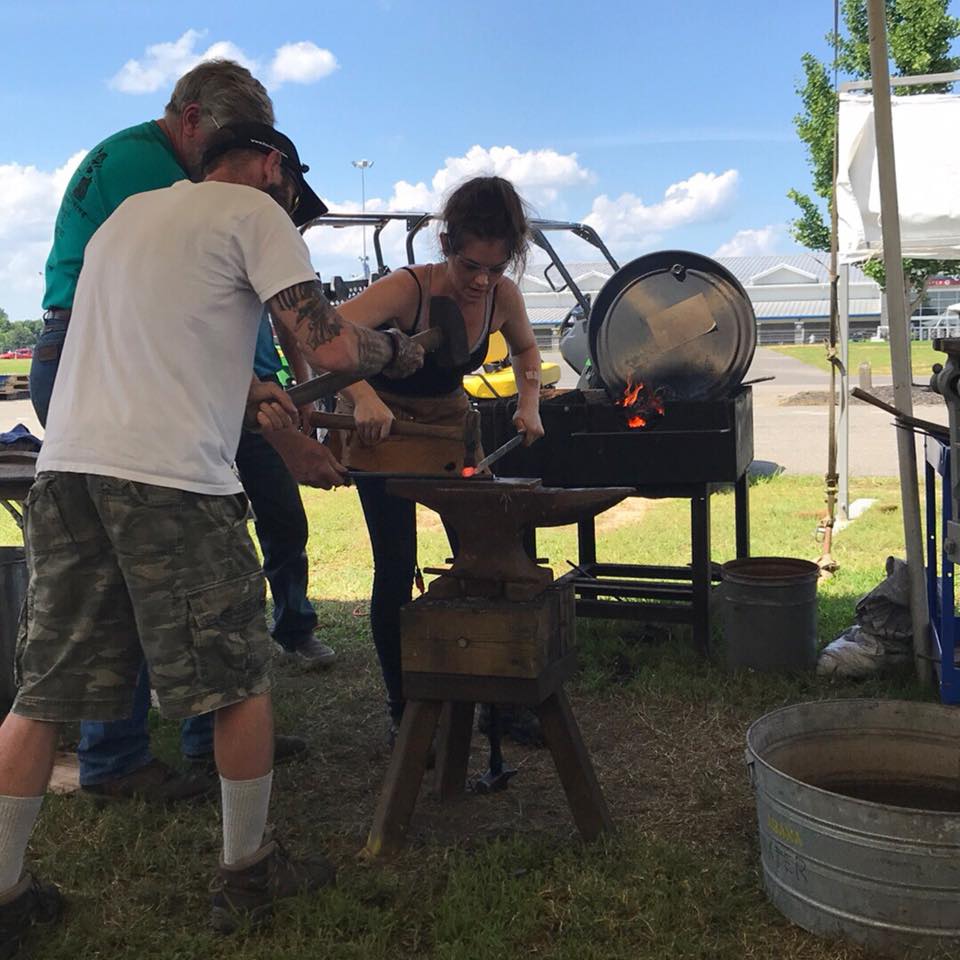 Ellen Durkan demonstrates at the conference. Photo: Courtesy of ABANA

Putting the “hand” in handmade
POMMs, aka the Patient Order of Meticulous Metalsmiths, are a group of artists whose name says it all. Five members were on-site creating a sculpture showing historical tools, which they made using only hand tools at coal forges – and they did it all with flair and fun. (Two other members were not present, but contributed elements for the sculpture.)

Doubling up
The conference featured two shows of members’ work: At Gallery Flux in Ashland, Virginia, just up the road from the event site, as well as the on-site show; both exhibitions offered a glimpse at the extraordinary skill and artistic vision of ABANA members. Notable pieces by Marsha Trattner, Laura Armstrong, and David Luck were among the uniformly excellent work by the other artists who, alas, were too numerous to mention here.

Family friendly
A tip of the hat to whoever thought to include the family classes in mediums and techniques including basketmaking, leatherworking, broom making, acrylic painting, and repoussé (with teacher extraordinaire Kirk Sullens). Held in the air-conditioned Farm Bureau building, the classes offered not only a respite from the weather, but also a chance for attendees to find new ways to get their maker mojo working.

The next conference will take place in 2020 in Saratoga, New York.