Raised in Havana, Cuba, Llane Alexis wasn’t born with a silver spoon in his mouth. But he was lucky enough to be handed sewing tools when he was 6 years old. “I ripped my shorts playing outside and tossed them to my grandmother to mend,” recalls Alexis. “And she gave them right back – along with a needle and thread – and told me to figure it out for myself. I thank her every day.” Today, the 43-year-old textile artist is never far from the tools of his trade nor the bundles of fabric he uses to braid baskets, wrap quotidian objects such as defunct computers and bricks, and breathe life into stuffed animals that would otherwise wind up in a landfill.

A lithe and impish presence peering out through thick, black glasses, Alexis left college to travel and paint before settling in San Francisco in 2001. His first textile foray was a series of “monsters” sewn out of sweaters scavenged at Goodwill. Alexis’ first foray into textiles involved stitching “monsters” with salvaged materials. These, which stand 3- and 4-inches tall, are made of deadstock Missoni wool.

“I’m a proud magpie,” says Alexis. “In Cuba, being resourceful is not just common practice, it’s essential for getting through life – nothing makes me crazier than seeing useful things in the trash. And because the fashion industry is one of the world’s biggest polluters, it’s also a question of ethics.” Everything he makes is upcycled from leftovers and deadstock – dyed silk from fashion house Dosa, denim from shuttered textile manufacturer Cone Mills, and cotton from Sally Fox, the pioneer breeder of environmentally friendly colored cotton. Alexis describes his technique of cutting, braiding, wrapping, and stitching as a process at once controlled and improvisational, a bit like jazz. As the frayed edges and existing patterns – be it a Japanese ikat or Missoni chevrons – are reassembled, a new story emerges. When locally based Levi’s presented him with piles of old jeans 12 years ago – ranging from indigo to the washed-out blue of a summer sky – he was inspired to crochet two massive rugs for their former flagship store, each a kind of historical time capsule.

I’m a proud magpie … nothing makes me crazier than seeing useful things in the trash. 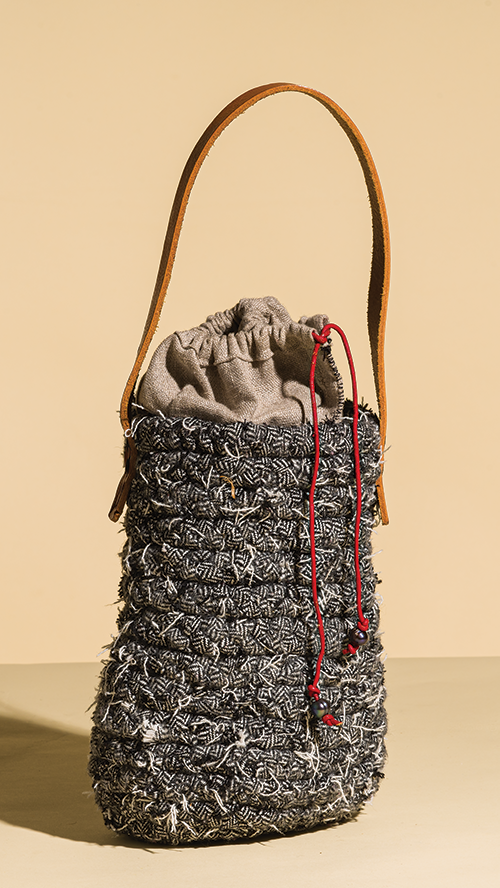 Much of Alexis’ work involves a design collaboration of one kind or another – often with people who are unaware of the call-and-response their product has ignited. Pondering the toxic waste of technology and its built-in obsolescence, he gave a turn-of-the-century Macintosh a hot-pink silk second skin – making it once again cool and worthy of display. And he is attuned to the ways even common objects may be rendered both beautiful and useful.

← Alexis takes off-cut, leftover fabric scraps from a variety of sources and transforms them into functional objects. Braided vessels like this one can be used as baskets and handbags.

River rocks collected from places such as Joshua Tree National Park and Japan have been clad and reborn as doorstops, bookends, and paperweights. “I love that something that looks soft and fluffy is really a hard object underneath with force and strength.”

One of Alexis’ enduring passions is functional art, as his work with chairs shows. He has given a number of damaged, iconic midcentury seats (Thonet, Aalto, Jacobsen) a soft new surface, conferring a bespoke quality to familiar profiles. A recent show in Reno, California, “Have Several Seats,” included Throne, a childhood chair reproduced in reclaimed cedar that he embellished as a way of reconnecting to his past. “Braiding for hours is meditative, and adorning this chair brought up moments of my childhood that had been buried,” he says. The show also debuted several rope swings, which began as collaborations between Alexis and master woodworkers he met in Japan, each of whom crafted a unique wooden disc for which he fashioned the hanging textile. 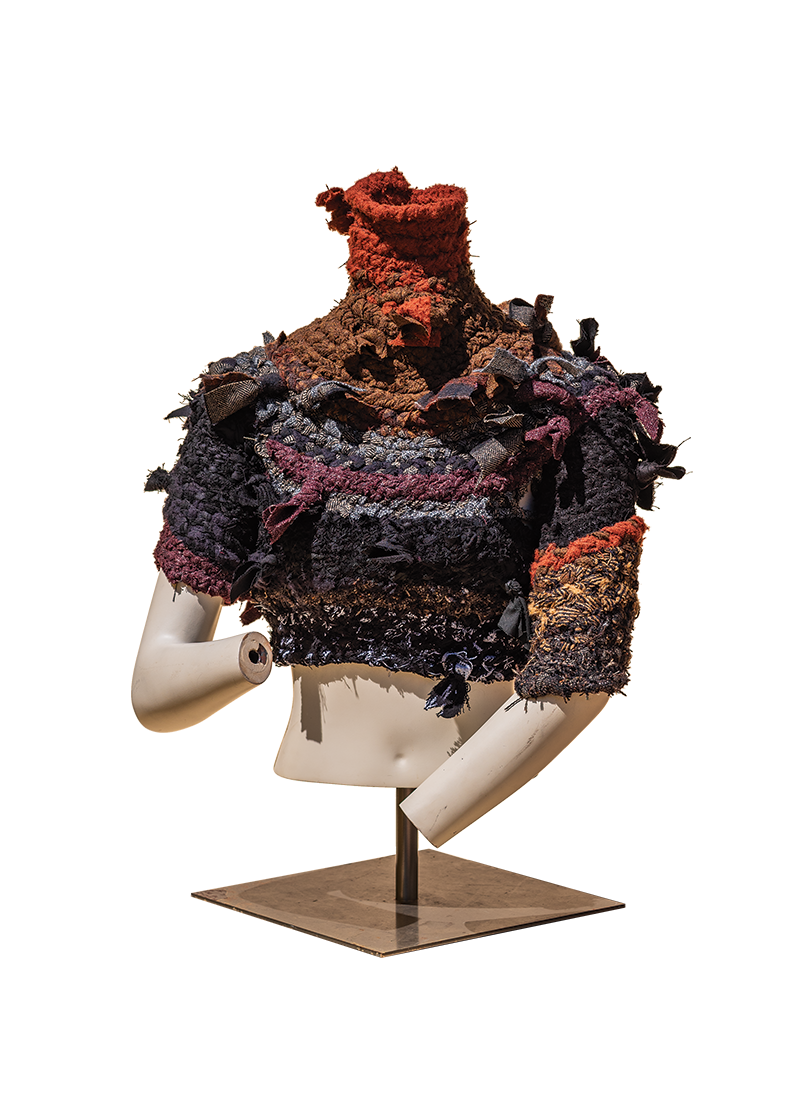 ↑ Alexis creates much more than functional objects. With works such as Color Correction: A Study of the Color Nude, inspired by frequent requests for “nude” clothing at the vintage shop where he works, the artist reflects on cultural assumptions about skin tones. “Brown is not a monolith,” he says, “just as nude is not one shade.”
Photo: Peter van der Pas

Lately, Alexis has also been using fabric to reflect upon issues of cultural identity. After fielding requests for the color “nude” at the vintage clothing shop where he works, he created Color Correction: A Study of the Color Nude. Braided and stitched atop a stark white mannequin, a shirt embraces the full spectrum of browns – from tan and orange to raisin and purple. “Brown is not a monolith,” he explains, “just as nude is not one shade.” And an ongoing project was sparked by a lifelong fascination with old illustrated bestiaries – compendia filled with real and mythical animals and moral lessons. “These stories were told from a straight, white, male, Christian point of view, so I am making my own beasts from discarded stuffed animals and writing my own fables.” His creatures are as fantastical in their way as the mermaids and dragons in the books of yore. A 5-foot-5-inch giraffe, for example, is resurrected with a hand-stitched patchwork of fabrics, beads from jeweler friends, bits of coral and glass gathered on a beach in Japan, and samples of embroidery made by Ana – the beloved grandmother who handed him needle and thread so long ago.

Although Alexis has been in the United States for about 20 years, he still feels pulled by both cultures. “I have so much love and respect for that tiny island. I had to leave Cuba to become myself, yes. But I am who I am because of it. It’s a beautiful contradiction.”