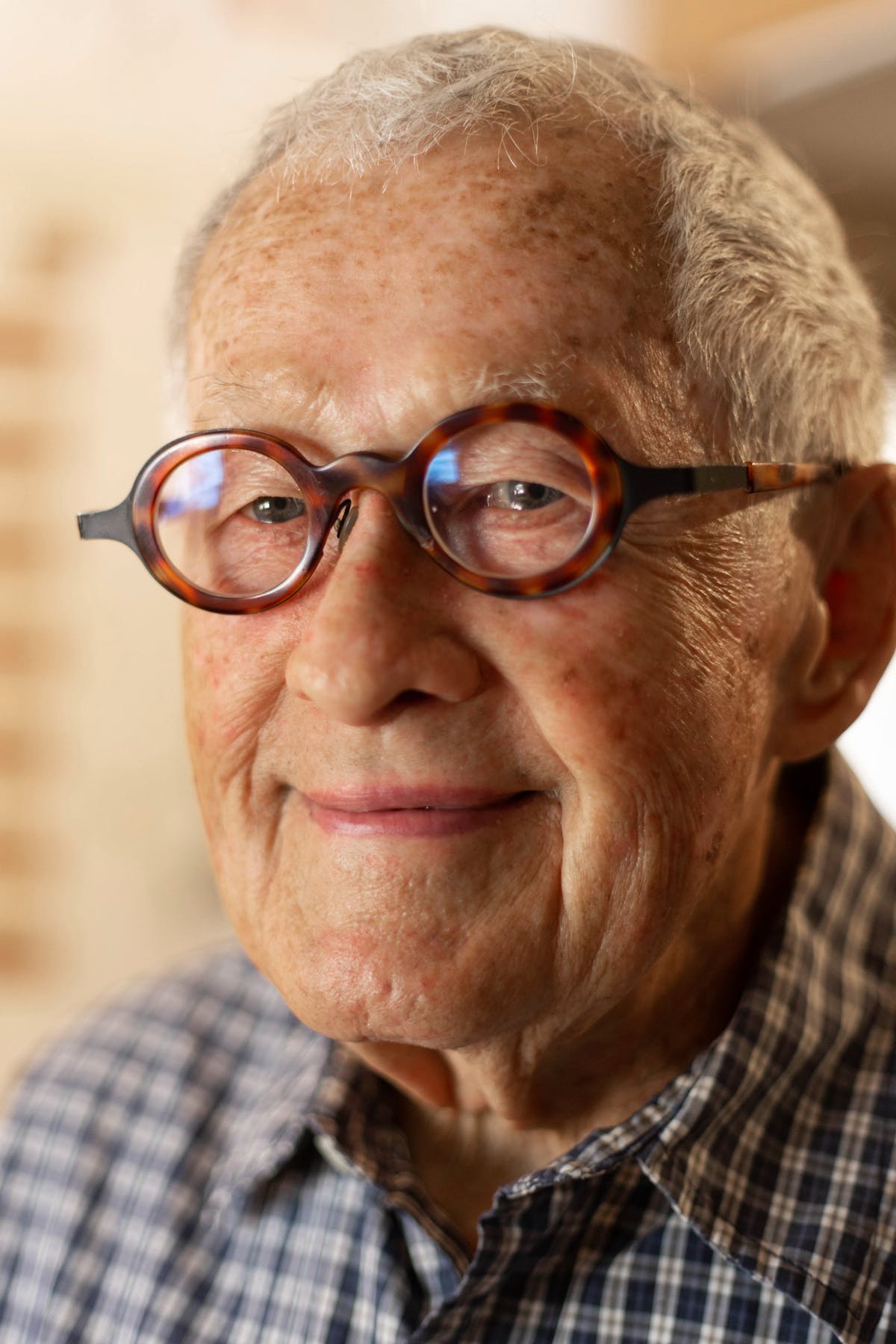 Palm Springs, California
Inducted into the College of Fellows in 1998

Jim Bassler is a global citizen in the world of woven arts. He’s transformed an innate affinity for “the strip,” an authentic interest in the weaving traditions of Indigenous peoples, an intellectual approach to his creative practice, and an innovator’s eagerness for unconventional materials into a body of work that, with aesthetic aplomb, addresses why making matters. His influences began early.

The German word for a citizen of Basel, Switzerland—famous for its ribbon makers—is “Basler,” and Bassler claims Mennonite (originally Swiss) ancestry. His father, John L. “Johnny” Bassler, a major-league baseball player, worked with found materials in his spare hours: he fashioned hooked rugs with strips of old silk stockings and built the family home in Malibu, California, using the house façades of old movie sets.

By the time young Bassler, now 89, had finished a tour with the US Army, a civilian job in England, and a trip home on a cargo ship via India, China, and Japan, he was hooked on the role of craft in cultures around the world. He established his artistic career with strip weaving (hung parallel, suspended horizontally, pleated vertically, interwoven), finger-weaving techniques, off-loom manipulation, and color achieved with dyed-warp ikat and batik. 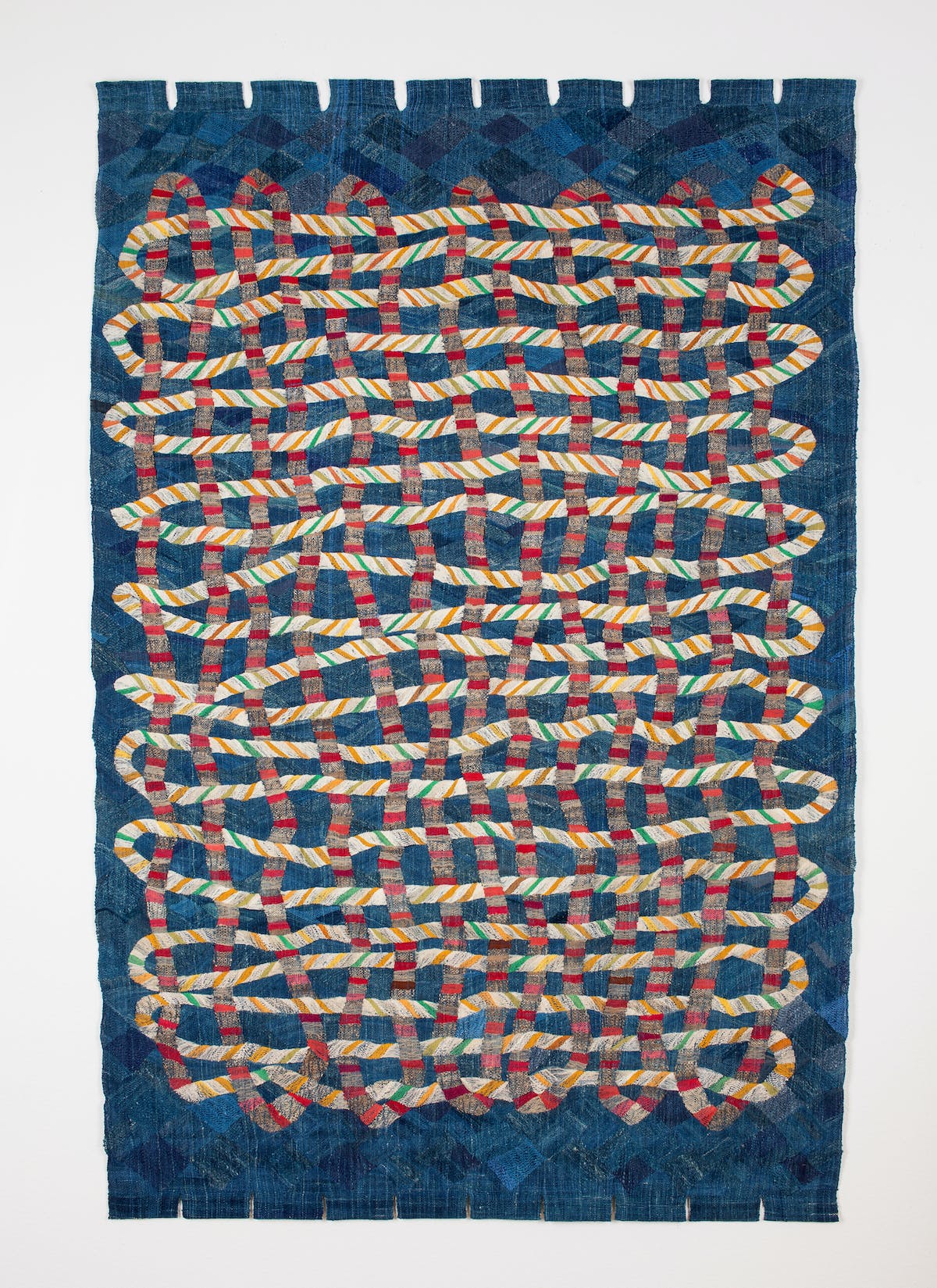 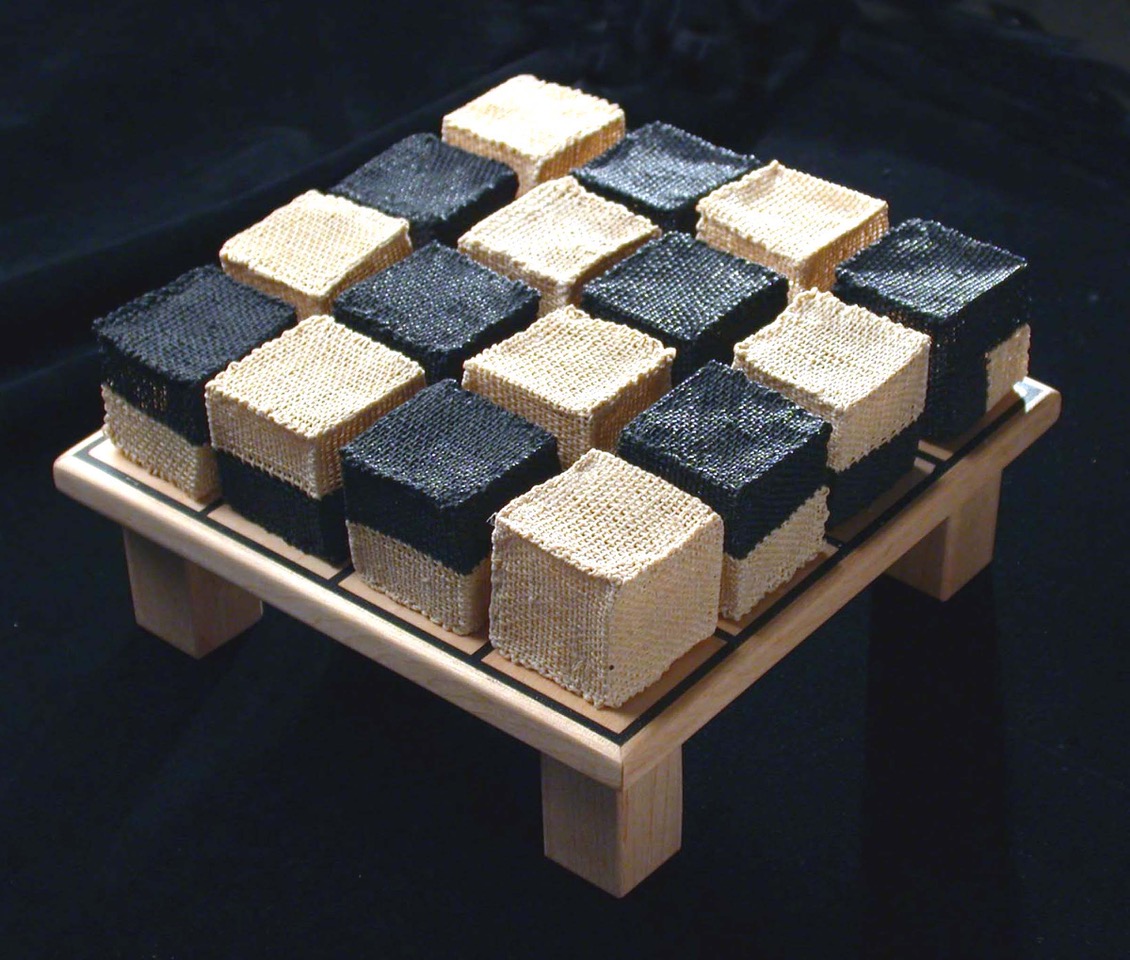 Over time, his work evolved in conversation with diverse cultures: Navajo wedge-weave structure; Japanese shibori; the painstaking scaffold weave of pre-Columbian cultures; the patterning, scale, and color of Peruvian textiles; and the intimate hand techniques of Oaxacan weavers. Fringes came and went. He’s explored pattern and shape, positive and negative space, and rhythms in light and dark through warp and weft. The “chance operations” of American composer and Zen Buddhist John Cage, US politics, Sandy Hook teachers, and environmental concerns have made their way into Bassler’s subject matter, material choices, and process. With every inspiration, he has done deep research and exploration in his studio and translated those influences into his own personal statement.

Spun duck feathers and indigo-dyed cotton yarns from Mexico, cut and twisted paper shopping bags from Trader Joe’s, clothing worn by the residents of Smithville, Tennessee, and purchased from thrift shops and yard sales, and most recently the spun fibers from the leaves of agave: wherever Bassler goes, he weaves the found materials of culture into his work. His goal: “The intimate feeling that happens as I am working is something that I want the spectator to realize,” as he told American Craft in a 1982 article. 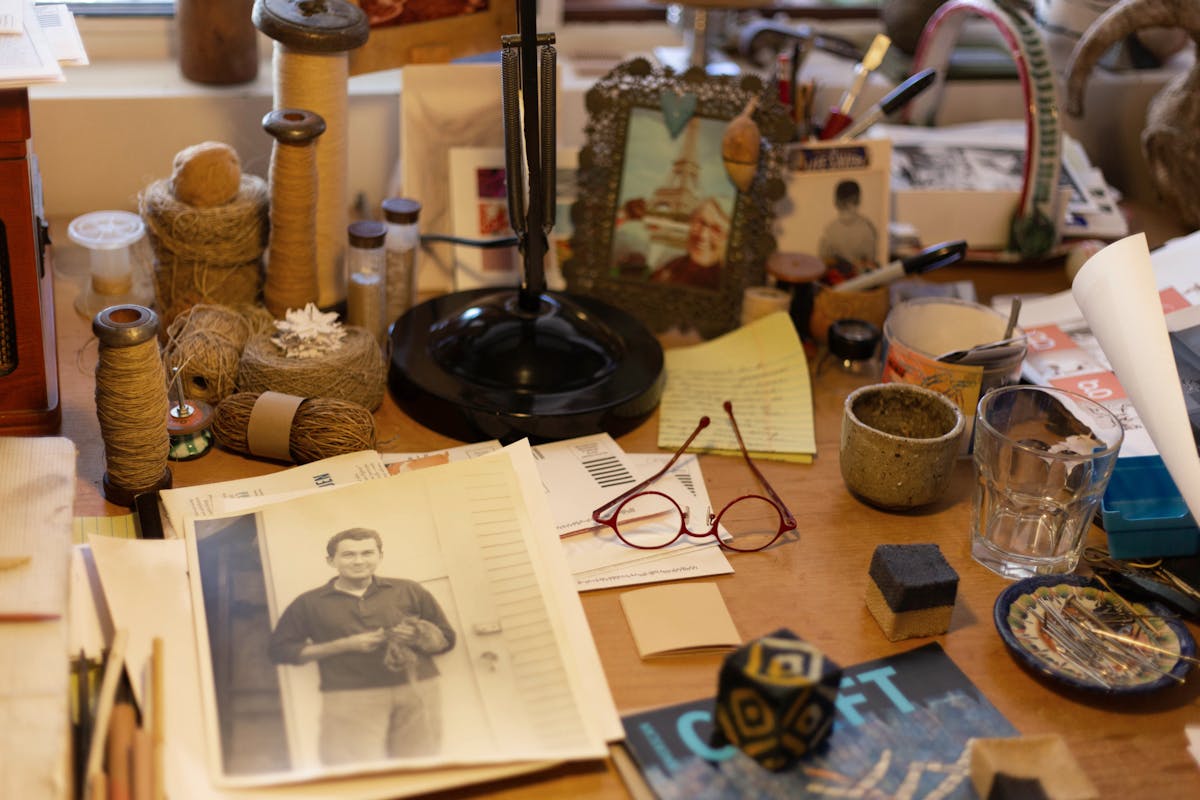 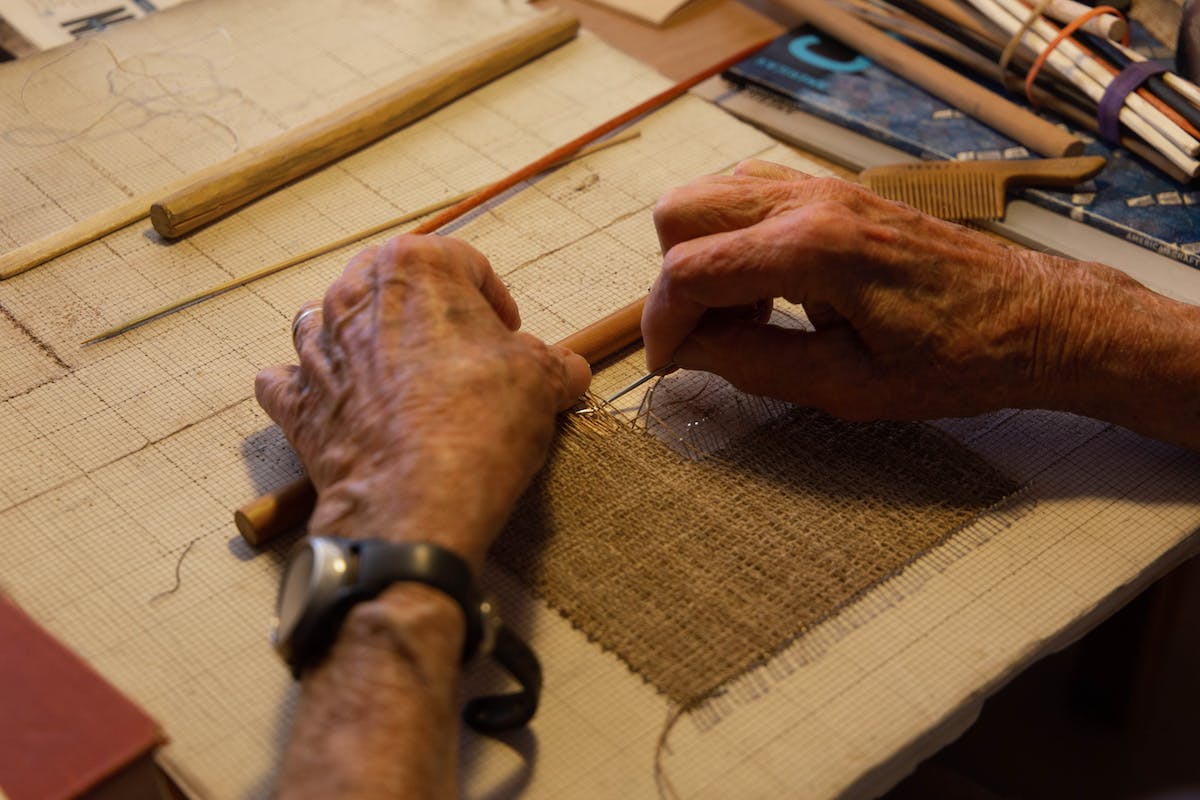 Despite teaching in the departments of Art, Design, Art History, and World Arts and Cultures at UCLA for more than 30 years, teaching textile history at the UCLA Fowler Museum, a two-year appointment as master craftsman in the fiber program at the Appalachian Center for Craft in Smithville, a National Endowment for the Arts grant, and exhibitions and museum acquisitions throughout the US, Bassler remains devoted to the quiet intensity of his studio work.

Only an artist of uncommon dedication could produce the strength and intimacy, textural and material ingenuity, and cultural communion and commentary evidenced in Bassler’s work. Weaving is a craft he considers noble. The life it’s given him, he adds, with humor, is one that “does not have to be loud or fast or annoying.”