She had been taking ceramics classes for less than a year, at a Manhattan pottery studio, when she shared her first mugs and tumblers with her father. To his eye, they looked a lot like pieces from the Kerma culture in Nubia, which had developed a rich history of pottery traditions. When her father sent back reference photographs, something in her clicked. “There was this sense of remembering—I was like, There’s something there, a communication happening on a DNA level,” Satti says. “It was almost like communicating with an ancestor who had done this in the past.”

That feeling of connecting to some place distant yet undeniably familiar has been a tether for Satti in the last six years, as her craft has grown into a thriving business. Working under the name Nur Ceramics, she is known for quietly exquisite pieces that nod to artistic, spiritual, and quotidian traditions of North and East Africa, where her family’s roots lie. Her vessels, from vases to incense burners, each have an origin story linking them to mores from time immemorial, though they look at home in any design-savvy 21st-century dwelling. 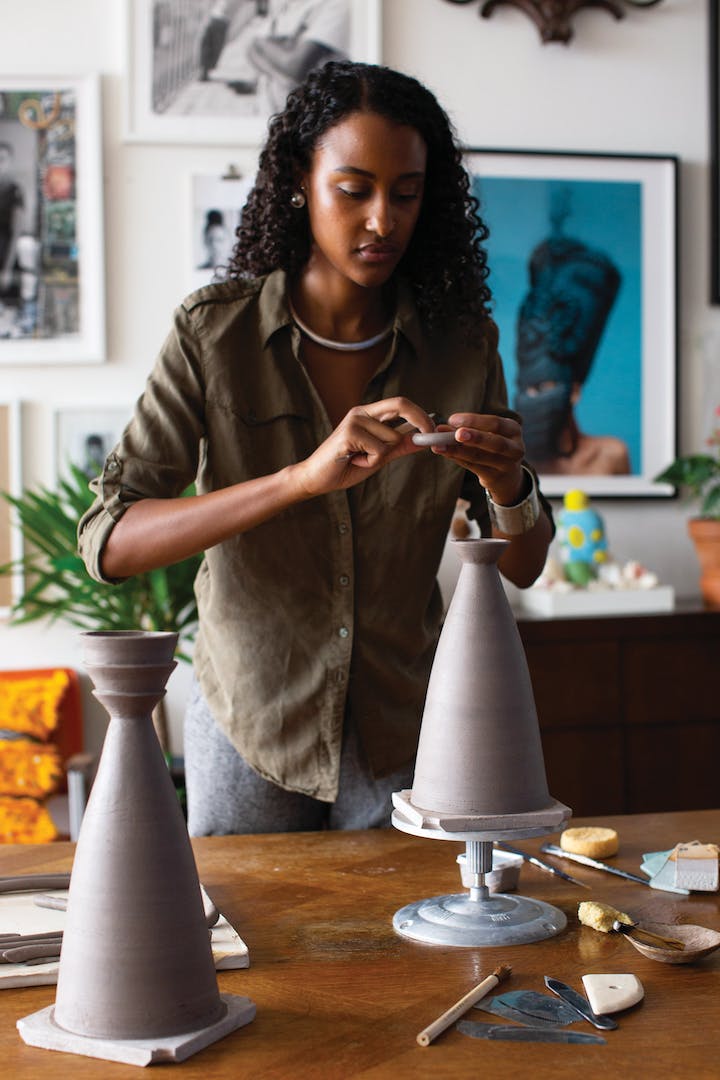 Born in Chad to a Sudanese father and Somali mother, Satti had a peripatetic childhood due to her father’s work with the United Nations. Her family moved to Belgium, then Paris, then Kenya, before she went to New York City for college. She took courses in international and intercultural studies to explore her interests in cultural anthropology, animism, and mythology. But it was an African art history class that compelled her to think more critically about her identity. She also realized how little she knew about precolonial Africa, having grown up in a Muslim home that did not fully embrace narratives of indigeneity.

“When I talk to my parents or people in my family, there is this rejection of things before Islam came, this rejection of understanding where we came from,” Satti says. “There was pride around the art and ancient civilizations, but there wasn’t this connection on the personal level. That class awakened a lot of my questioning.” 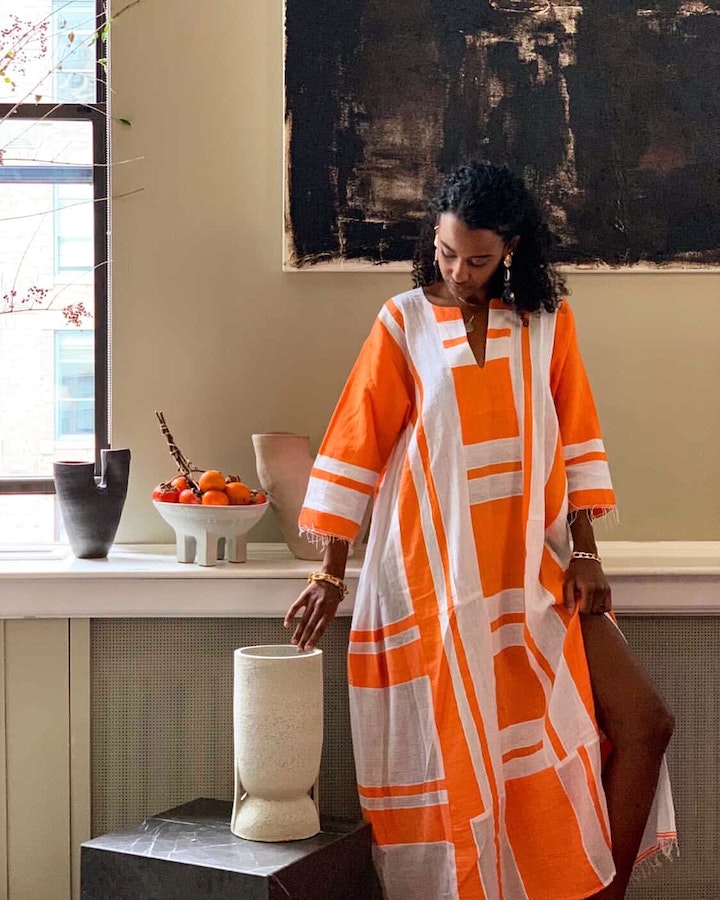 Satti with one of her Habba vessels (bottom left), which reimagine wood pounders used to grind grain. Photo by Jill Kupcha as part of a collaboration with sustainable Ethiopian women's wear brand Lemlem and Scandinavian design house Menu Space.

Satti still resides in New York City, which exerts its own creative influence; Kenya and Sudan also represent different homes for her. She often visits both countries and has also traveled throughout regions of Africa to meet and learn from traditional potters, such as the Kechene Women’s Pottery Cooperative near Addis Ababa, Ethiopia. Art, whether ceramics or dance, has always been a way for her to better understand and engage with cultures across borders.

Threads from Nubian traditions, for instance, abound in her clay designs. Tall and capacious to resemble scaled-down wells, Habba vessels reimagine the wooden pounders still used today to grind grain for flour. Her Zir vessels—slim, barrel-like vases yoked by a slender crosspiece—pay homage to amphorae (two-handled vessels popular in ancient Greece and Rome) that households left outside, often in pairs, for thirsty passersby; the water jars are symbols of everyday generosity. And her Naama series of bowls, deep and full-bodied, underscores the understated beauty of ostrich eggs, which symbolize life and resurrection in ancient Nubian and Egyptian creation myths. 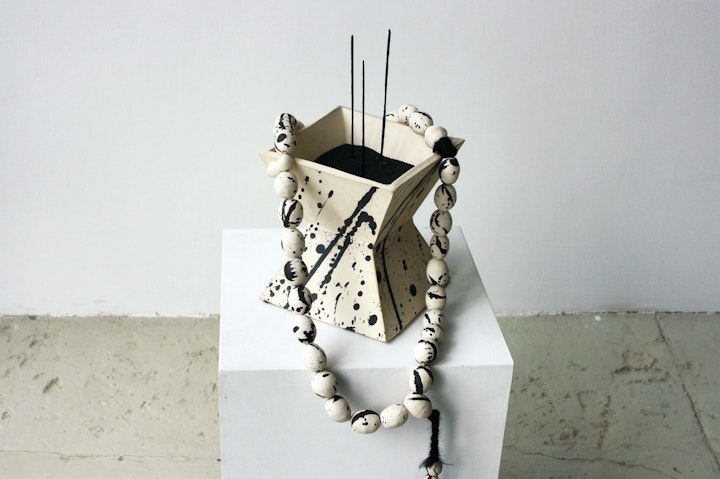 Satti has also recently been developing her Acacia vessels, named for the flat-topped trees common in African savannas. “It’s one of those symbols people just connect to Africa, but it also brings so much ceremonial connection,” she says, pointing out that gum arabic, extracted from acacia trees, is used as a base for incense. Her finished pieces—some larger than adult torsos—feature dual arterial necks at different heights, seemingly in ongoing growth.

It is perhaps Satti’s incense burners, though, that best capture the ethos of her practice. Her Saba vessels, hourglass-like pieces formed from conjoined trapezoids, cradle charcoal and incense resin—one of her favorite forms of incense. They are more than design objects, continuing ancient rituals mythic as well as familial: Satti remembers her grandmother’s routine of burning frankincense and sandalwood in mabakhir (censers) around the house. 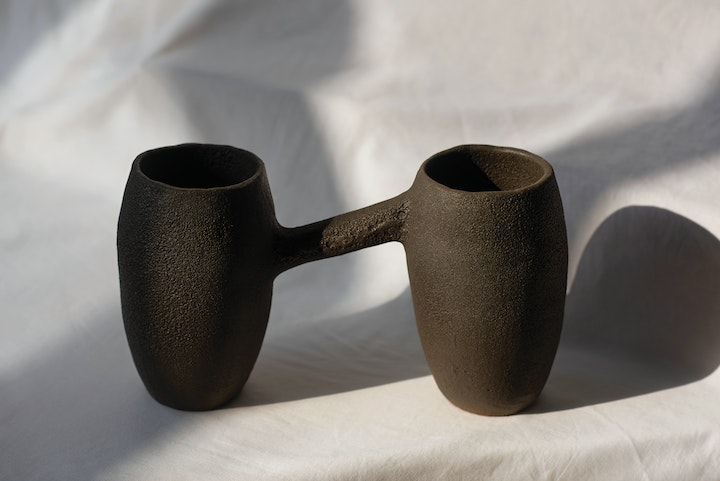 These Zir vessels (8 x 12 in.) are made of semi-porous clay with a wide belly and tapered bottom, a design that keeps water cool in the high desert temperatures. Photo by Dina Nur Satti.

As much as the burners can help people access intangible relationships to their past—smell and memory, after all, are intertwined—they can also become objects of shared experience. In her own gatherings with friends, at which some might play the oud (a pear-shaped stringed instrument) or the frame drum, Satti uses her burners to anchor the performance space, like pillars. “They’ve become part of our community’s language,” she says. “For me, what’s really powerful is those memories that the piece creates and then carries.”

In a way, Satti uses ceramics to articulate the slippery yet palpable pulses of diasporic longing: she connects histories across time and space to make tangible common sentiments of uprooting and belonging. “I interact with that story line of displacement, grief, longing, and oppression from the perspective of my culture,” she says, “but it is part of the global story. We’re now trying to resolve and understand the pain we’ve collectively experienced, predominantly in the global south.” 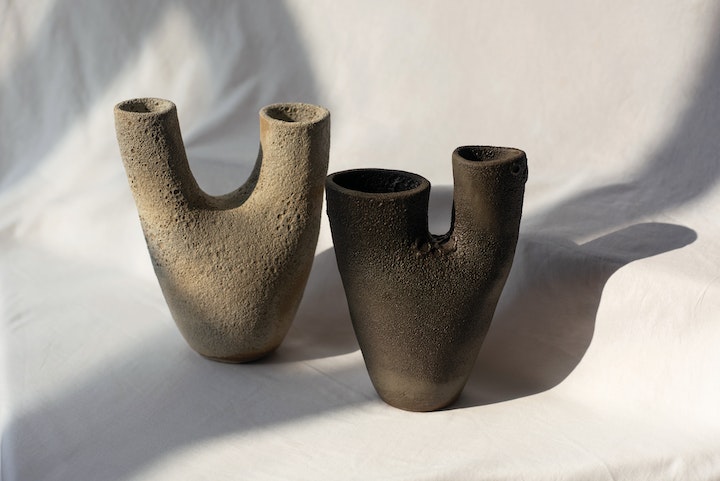 The asymmetrical arms of these Acacia vessels (14 x 8 in.) are inspired by the branches of the acacia tree, whose resin is used in Nubian incense burning rituals. Satti says incense was burned as an offering to the gods with the belief that the smoke carried one’s prayers up to the heavens. Photo by Dina Nur Satti.

Graceful and modest as they are, Satti’s ceramics carry an undercurrent of determined strength. For her, healing the self is crucial to her journey of learning about distant lands and lineages.

“I think that a lot of us who grew up with these identity wounds go on to use that as a place of power, to say, Let me reclaim that narrative,” Satti says, adding that she hopes to inspire the next generation to find pride in their roots: “Let me tell you a story that we’re not told. Let me help you understand that there is power in where you come from.”