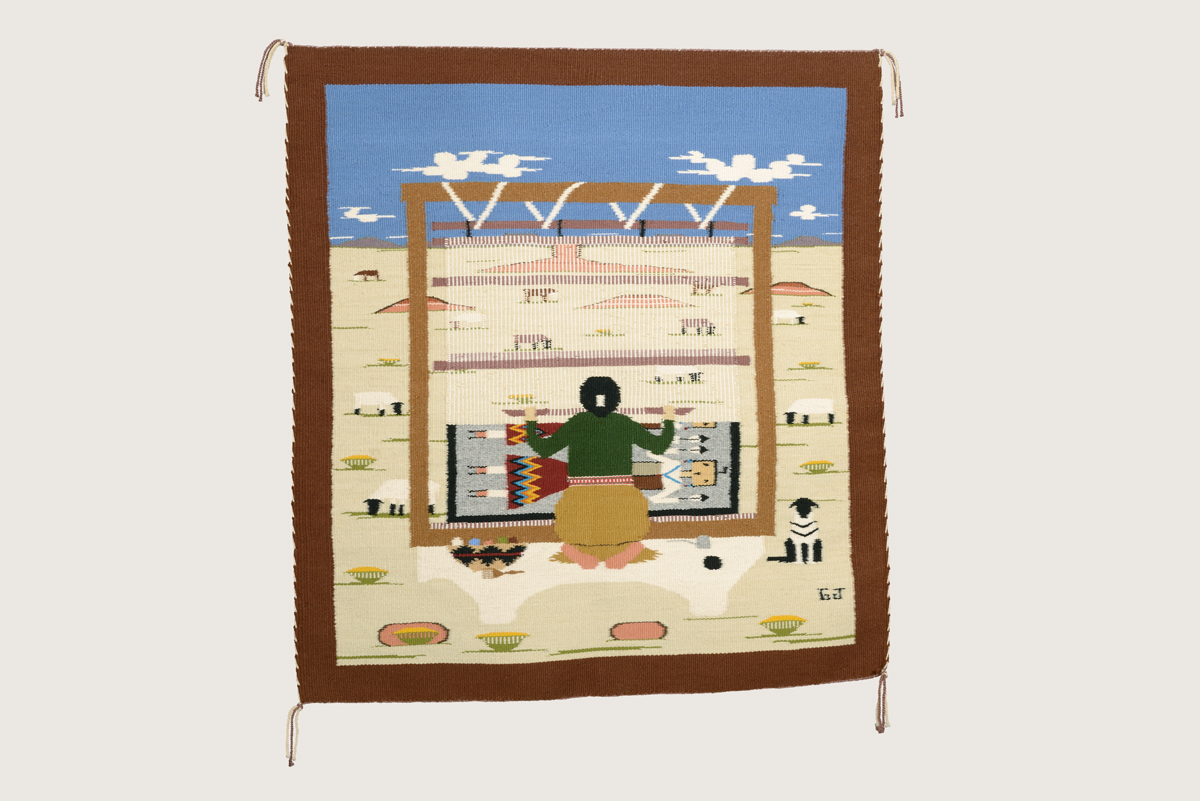 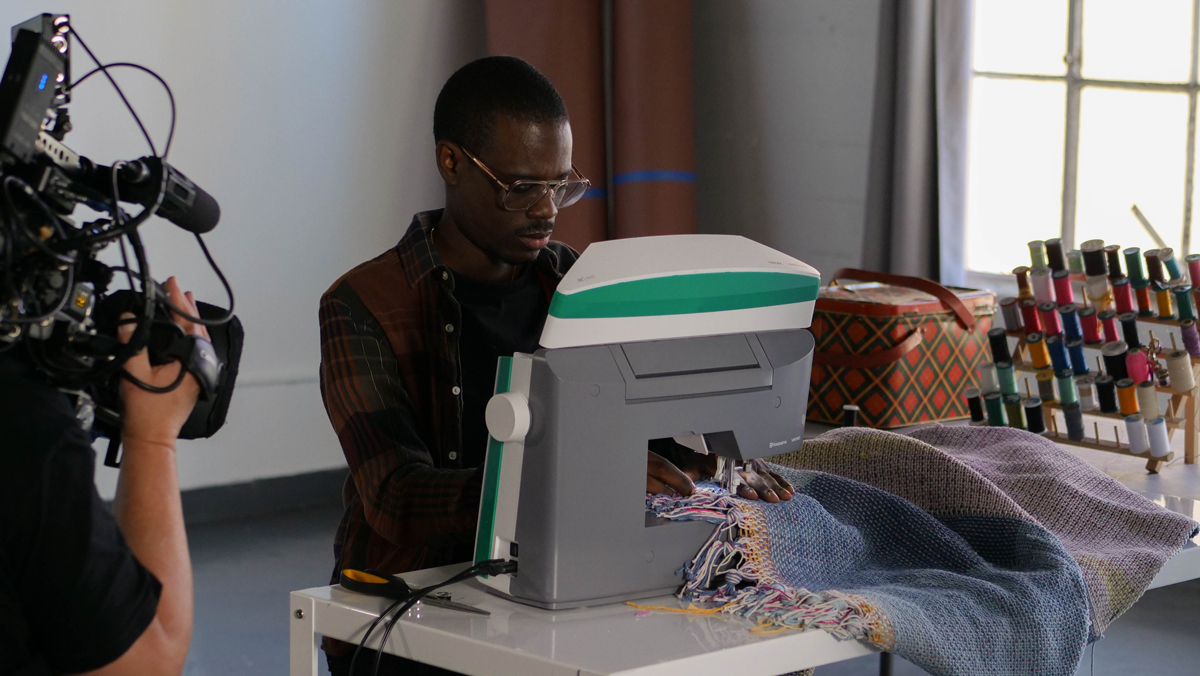 Diedrick Brackens, as featured in the "Inspiration" episode of Craft in America. Photo by Denise Kang.

With two new episodes, PBS launches the 14th season of its venerable program Craft in America, which tells the stories of craft and artists in every part of the country. Released simultaneously, the “Home” episode “visits artists whose environments are filled with meaning and metaphor” while the “Inspiration” episode “reveals the magic and influence of craft.” The collection of craft artists included in these episodes is impressive. Tune in to find out more.

The vessel, a primary craft form, is a bearer of physical things. But at the same time, say the organizers of this show, “the idea of the vessel has been used to explain the secrets of the universe.” Here 15 prominent artists contribute examples of this resonant form, and the Center adds works from its permanent collection.

This exhibition is the third solo show at the Hashimoto gallery by the Brooklyn-based Albrecht, who is best known for his colorful cut, painted, and assembled wood pieces. The artist will present over a dozen new wood relief and sculptural works. 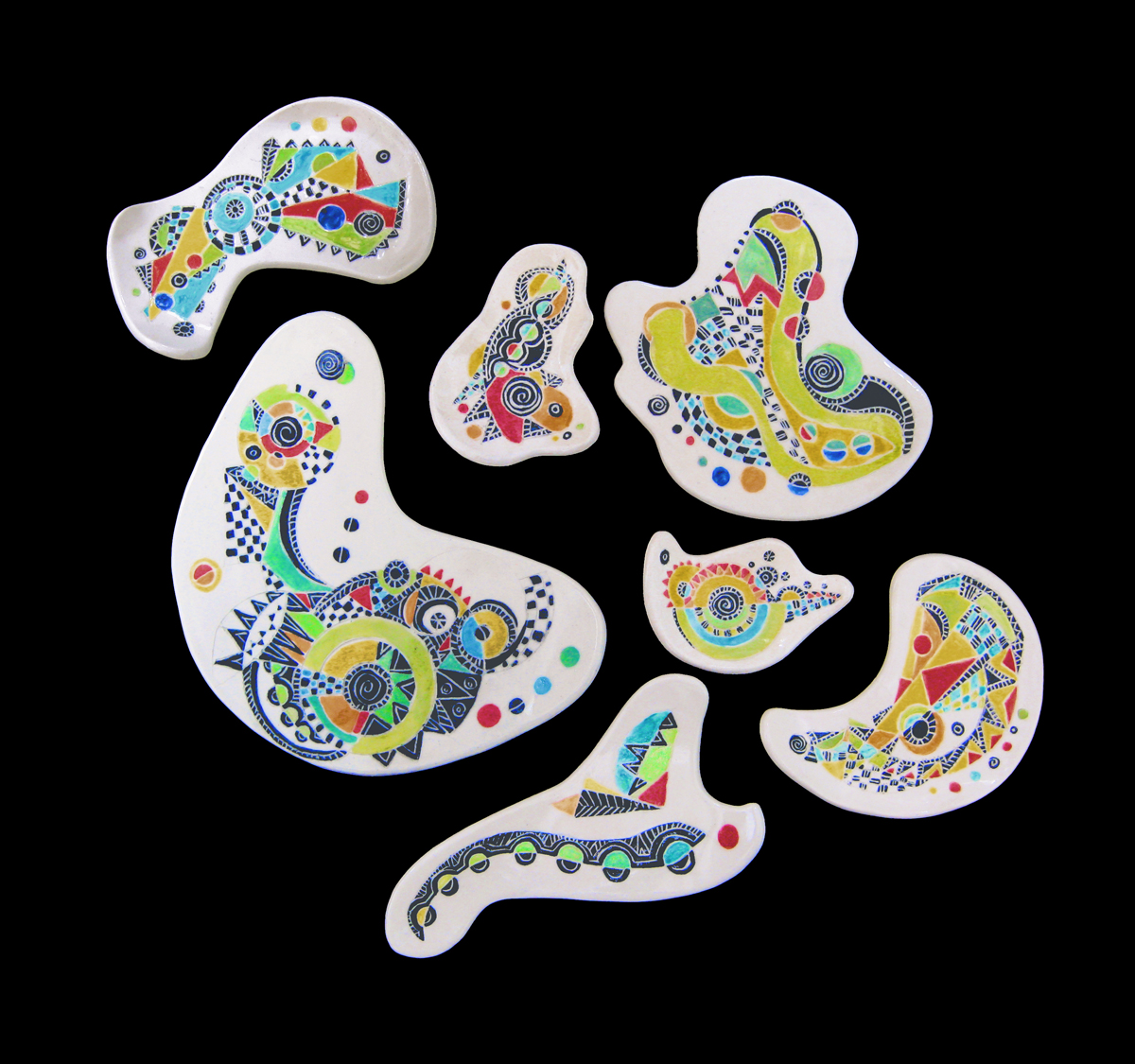 When COVID struck, Jaffe became, in her words, “food-obsessed.” While her husband took up baking, she plunged into making dinnerware. This exhibition shows off the colorful, oxidation-fired results, from sake sets to dinner plates and beyond. The whimsically shaped pieces in a wall-mounted installation called the Solar System series can double as hors d’oeuvre plates.

Organized by the Museum of Contemporary Art Chicago, this comprehensive survey of Cave’s career showcases an artist celebrated for his textile works and installations that foreground marginalized—particularly queer—people of color. Cave’s many influences, including the flamboyant musical collective Parliament-Funkadelic, will be on full display. 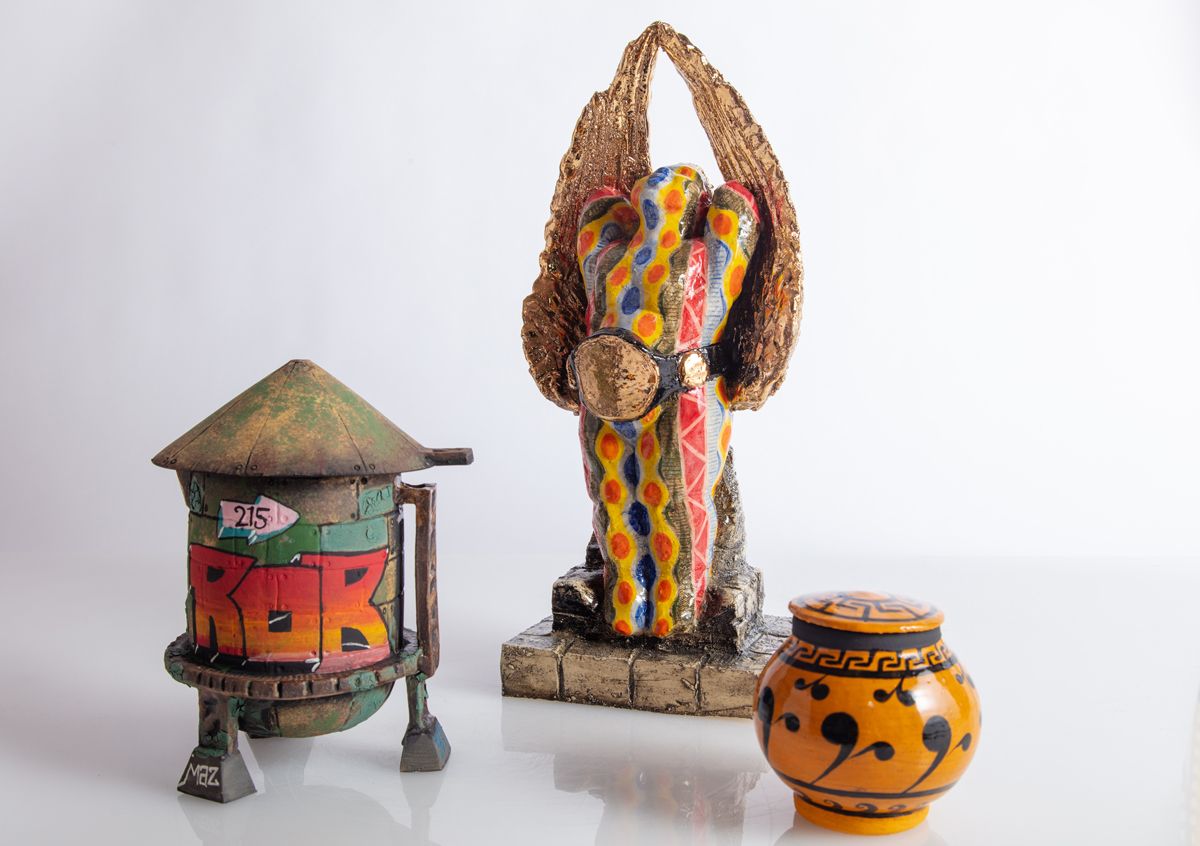 Curator Maria Cristina Dider chose the theme “The Golden Age: Looking to the Future” for the 18th iteration of this international collectible design exposition. Running concurrently with Art Basel Miami Beach, Design Miami features 50 galleries with a focus on contemporary and historical furniture, lighting, and objets d’art. R & Company will present Roberto Lugo’s web-based project The Village Potter in physical form, as a bodega with new objects nestled among his better-known ceramic forms.

This forward-looking biennial exhibition of juried work by fine craft artists in Oklahoma, Arkansas, Colorado, Kansas, Missouri, New Mexico, and Texas bills itself as a “bridge [between] cutting-edge concepts and traditional skills.” Works in ceramics, glass, fiber, jewelry and metals, wood, and other media explore—and cross—the boundaries of art, craft, and design. 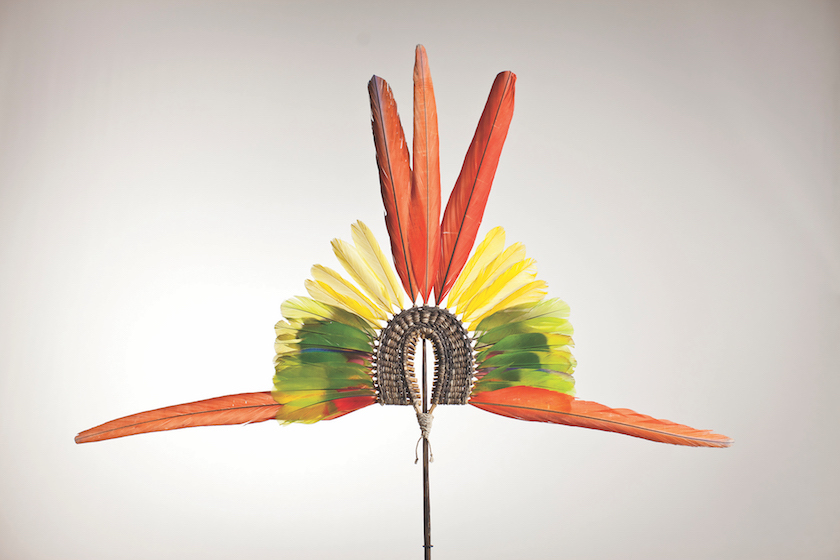 The headwear in this show, drawn from 43 countries, ranges from wedding veils to crowns to Indigenous headdresses and beyond. It’s a rich portrait of how the world’s people display power, status, identity, and spirituality on their heads. 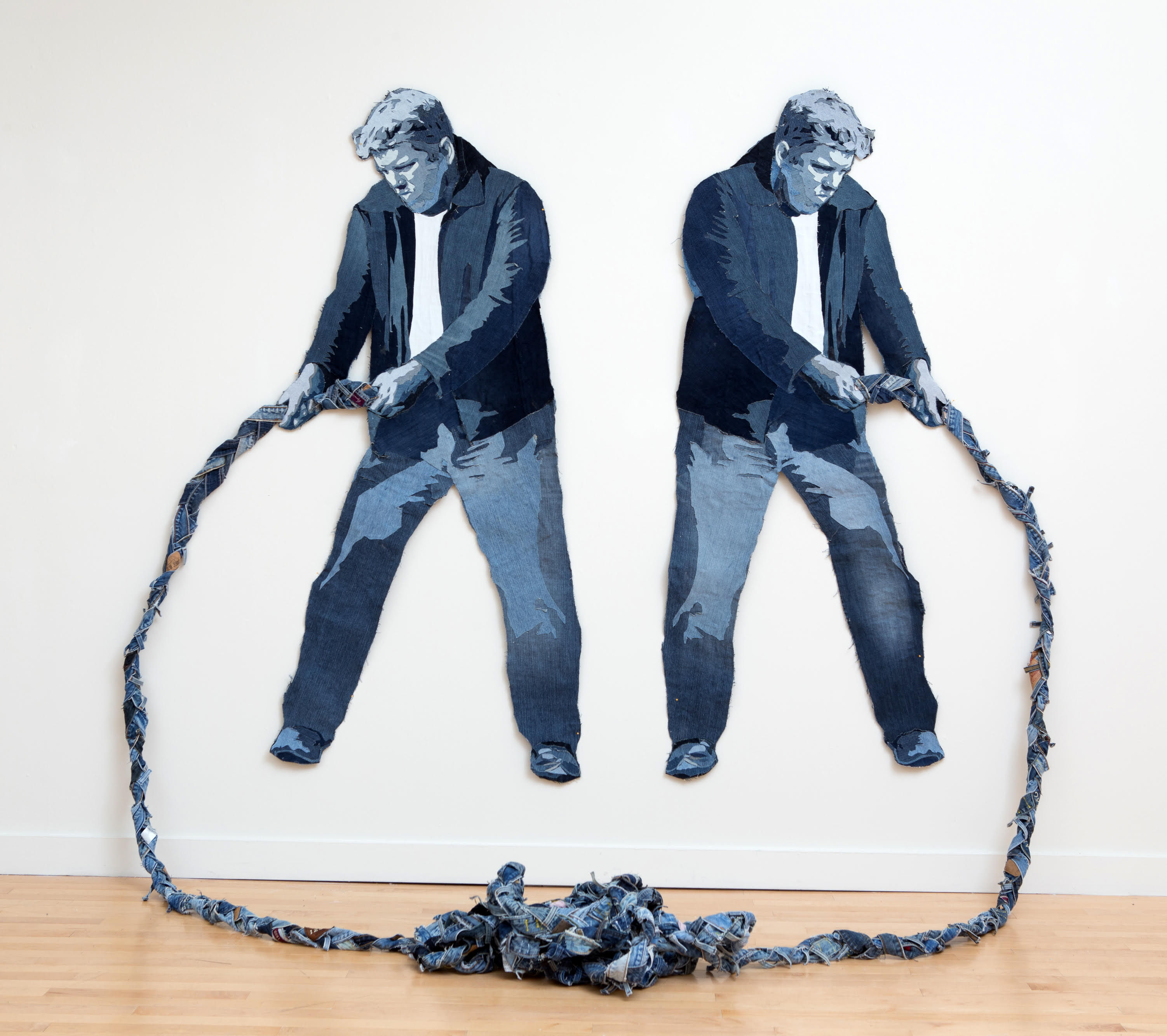 “What people make to clothe, protect, and decorate themselves and their spaces tells us about their cultures, eras, identities, families, and lives,” say the organizers of this show. The significance of fabric in life has led the artists on display here to use it to explore issues such as climate change, war, social justice, and racial and gender identity. 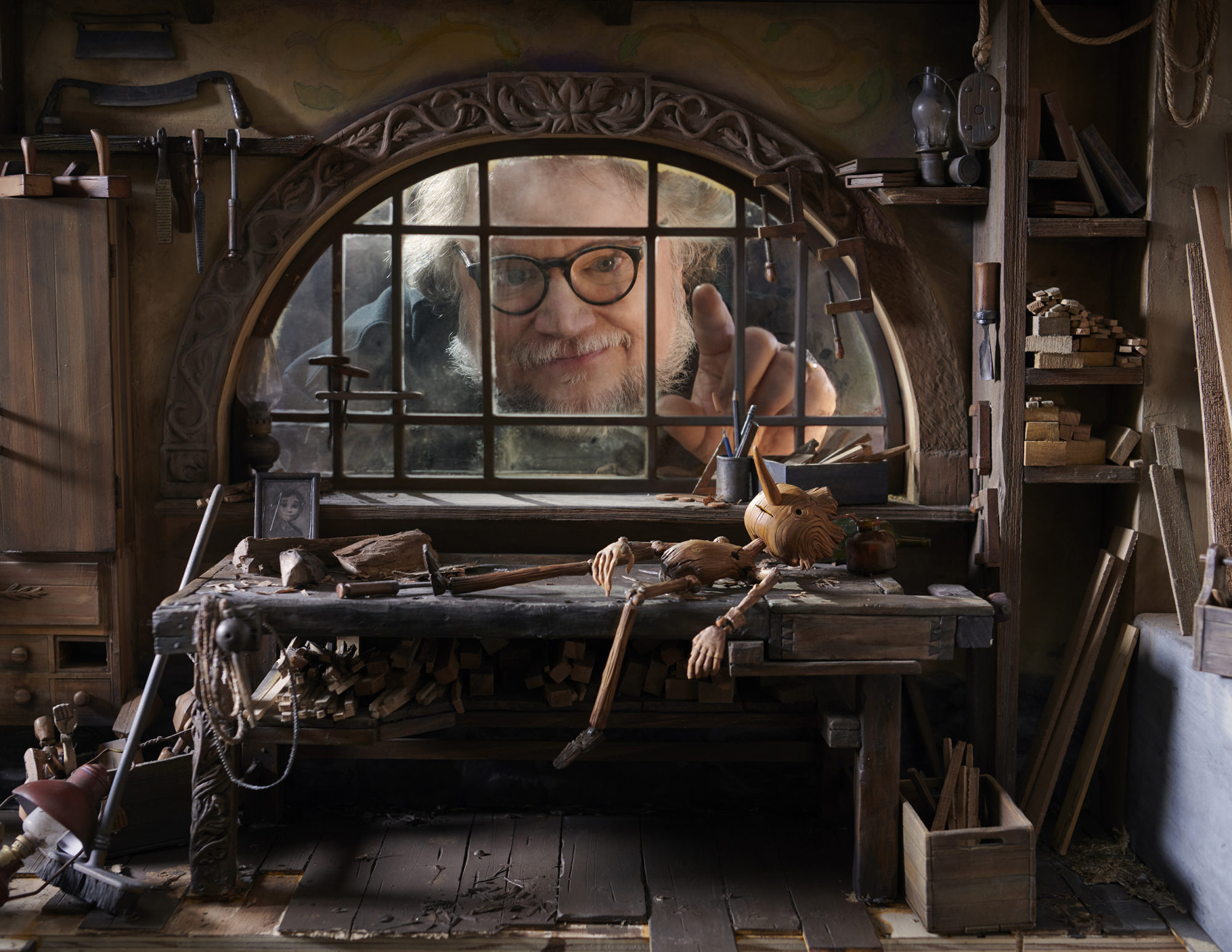 Scheduled to coincide with the premiere of the lauded director’s new animated version of the classic story of the wooden boy, this exhibition combines various interpretations of Pinocchio from around the world with production art, props, working sets from the film, and video installation documenting its stop-motion animation process.

The 12 life-size clay sculptures of human figures in this show are the work of a dozen artists from around the country, all of whom use the figure to declare their personal, racial, and ethnic identities—and to both celebrate diversity and call attention to how social injustice and historical trauma leave traces on the human body. 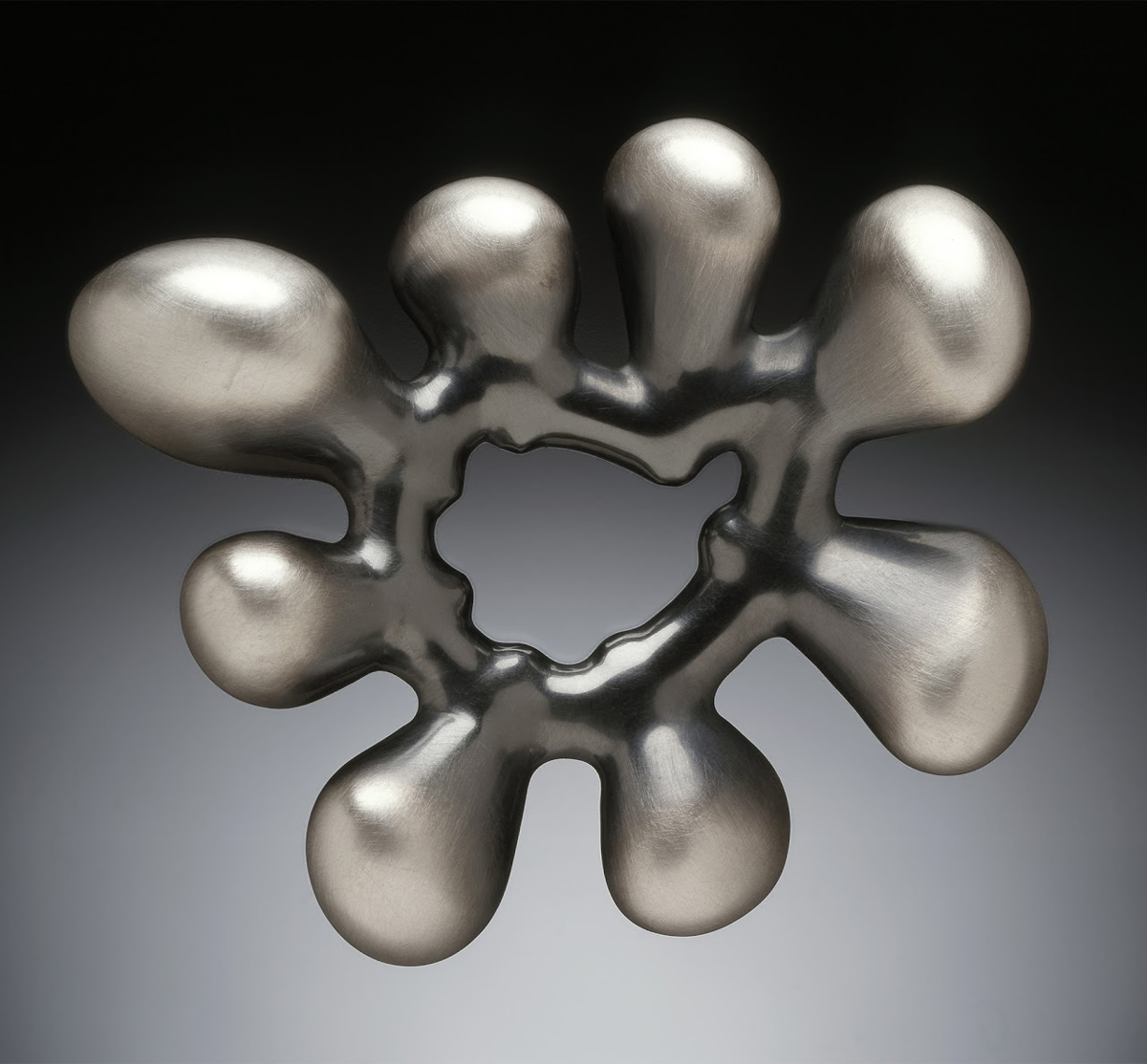 Organized in conjunction with Fuller’s exhibition Daniel Jocz: Permission Granted, which highlights the work of this lauded Cambridge, Massachusetts, metalsmith, Creative Alloys displays work by a dozen metal and jewelry artists in Boston. These “creative allies” have formed what the organizers call an “ecosystem,” making the city a major hub for the craft. 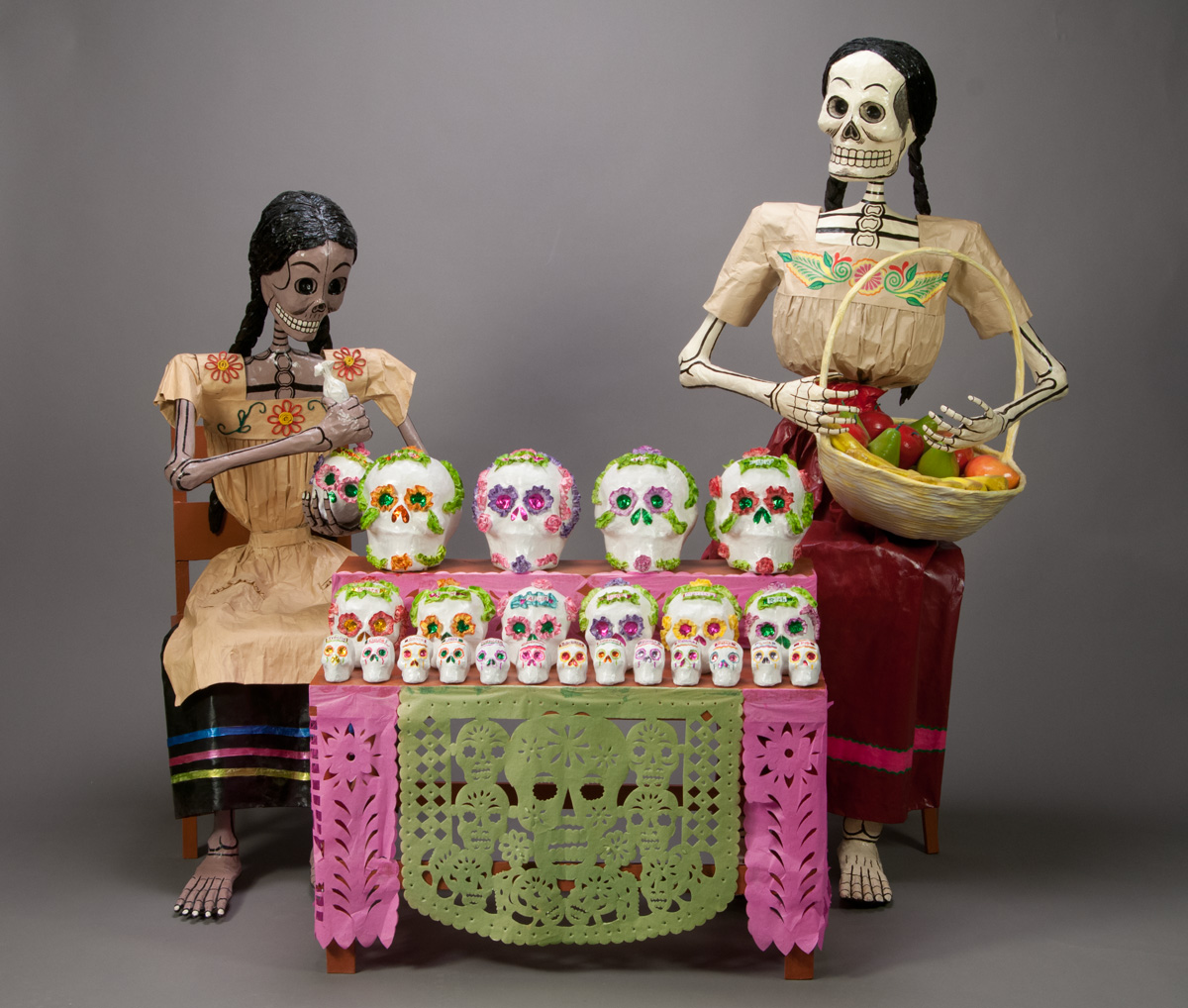 Using paste, cardboard, paper, and other simple materials, cartonería artists craft piñatas, dolls, Day of the Dead skeletons, and fantasy animals called alebrijes. More than 100 sculptures from the museum’s permanent collection will be on display in this celebration of a living tradition with deep historical roots. 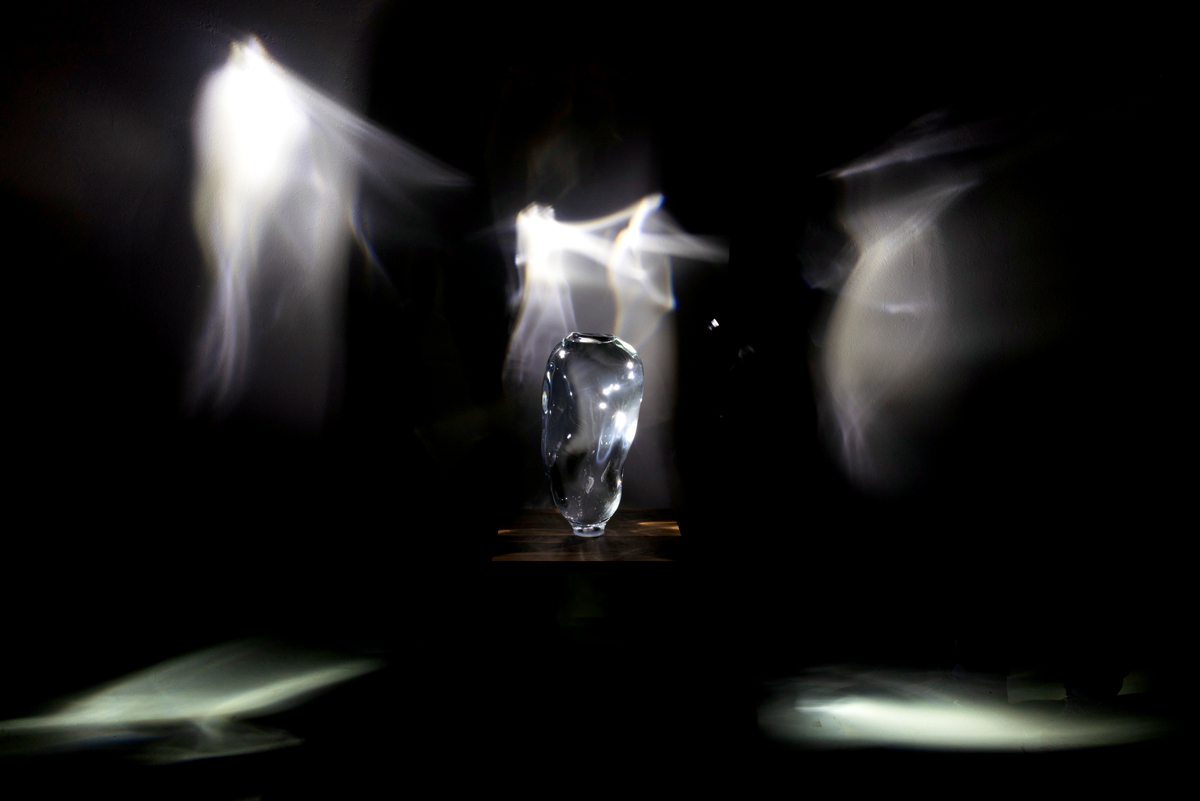 As featured in Fluidity: Jo Andersson, being1. Photo by David Puig Serinya.

This gathering of works by lesser-known contemporary glass artists from Sweden and the American Midwest, including pieces by women artists in the Institute’s collection, “celebrates the achievements of undertold and unheard voices.” A highlight will be an installation by Swedish American artist Jo Andersson that augments glass with light, liquid, and sound. 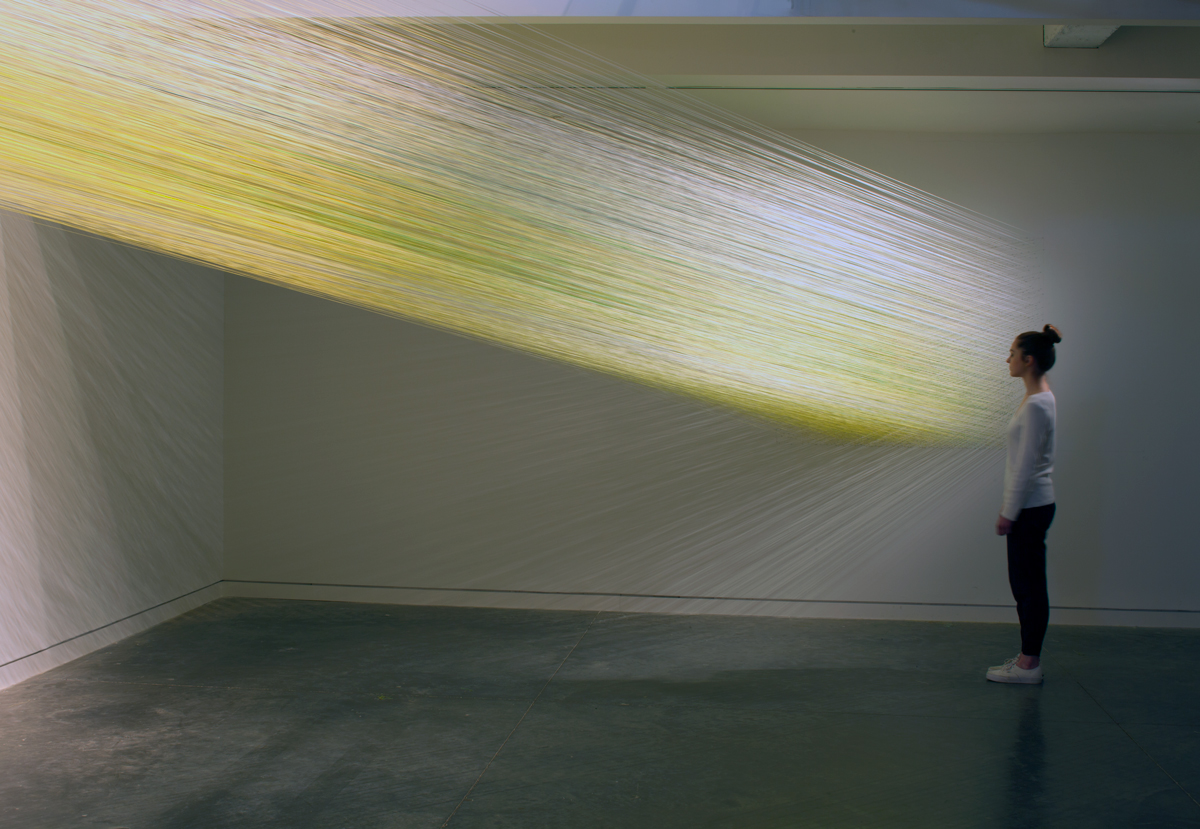 The light in the title of this exhibition is created when physical light merges with the myriad threads in Lindberg’s installations, producing luminous spaces for meditation and reflection on self, community, and the divine. “A series of programs within the gallery,” the organizers say, “will bring community members together for shared experiences designed to foster understanding and transcendence.” 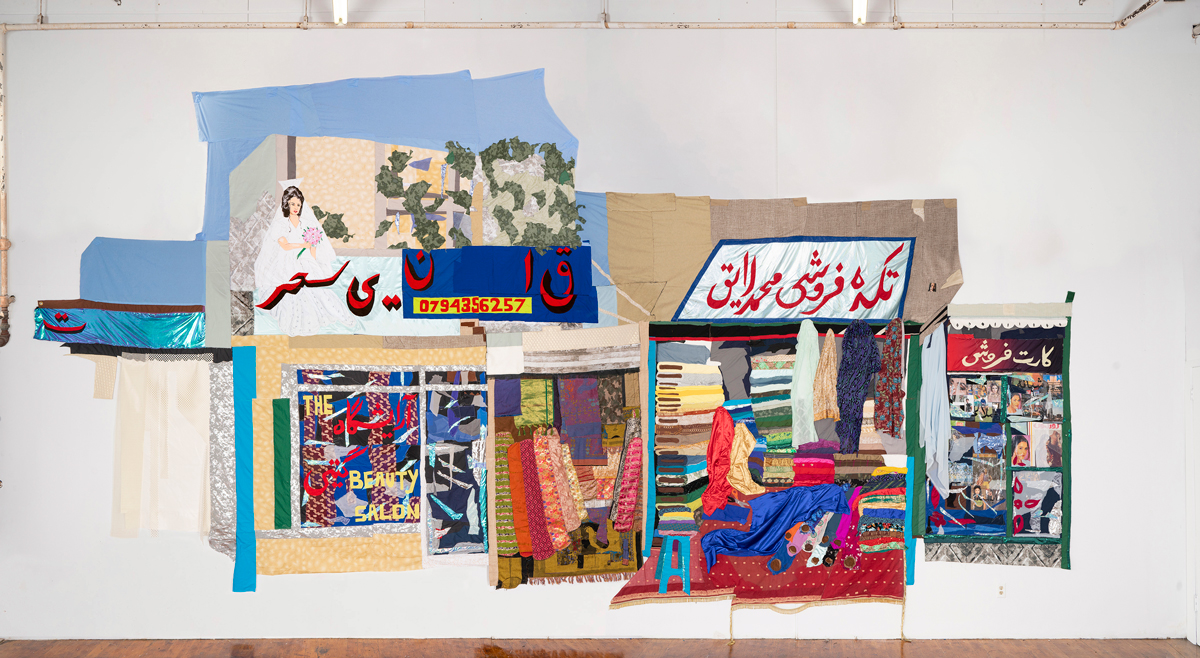 Combining textile collage with painting and printmaking, Afghan Canadian émigré artist Amiri crafts intensely colorful works evoking domestic interiors and shops in the market districts of Kabul, the war-torn city her family fled in 1996. Centered on the lives of women as homemakers and entrepreneurs, her works vividly evoke female struggles for livelihood and liberation. 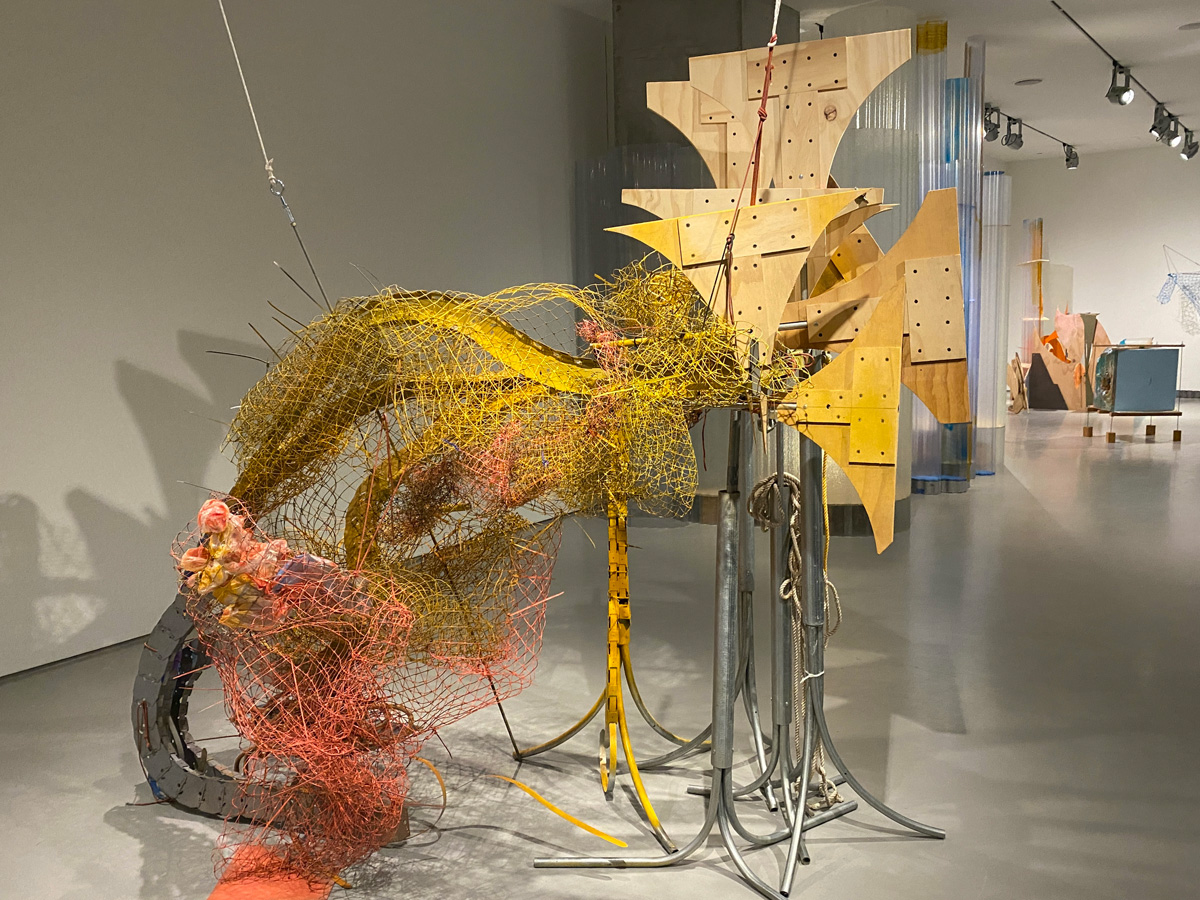 Out of Joint
Santa Barbara Museum of Art, Santa Barbara, California
February 12–May 14, 2023

The room-filling sculptural assemblages of Santa Barbara–based artist Joan Tanner are made out of the least promising of mass-produced materials, including plastic corrugated roofing sheets, rebar, zip ties, drywall, C-clamps, safety netting, and plywood. In this show, her brilliantly hued, flamboyant, nearly-but-not-quite-chaotic sculptures will share space with recent abstract drawings.

Irving’s dense, colorful, funky assemblages are made of ceramic replicas of everyday objects, ceramic fragments, and embedded found objects and images. This sophisticated, highly finished “junk sculpture” suggests an archaeology of moments in history, the worlds of individual people, and contemporary ways of Black life. On view will be new work, including several pieces commissioned by the Walker. 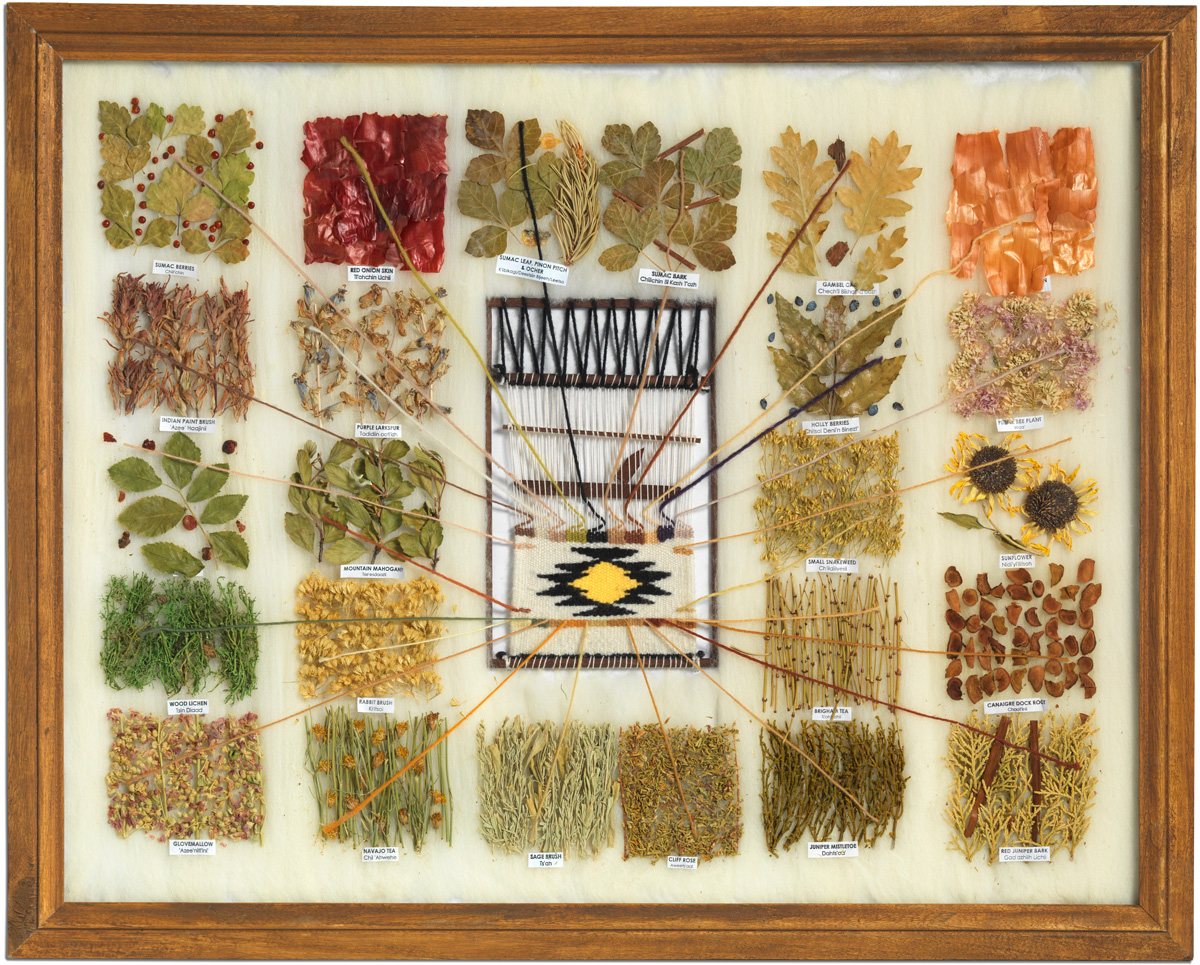 This combined gallery and online exhibition will showcase Indigenous textiles from the American Southwest in a dynamic manner that breaks with the traditional, static museum protocols of period, design, and style. Instead, local knowledge, continuing development, market realities, and Native agency and voice will be emphasized, along with comparisons of Navajo textiles with Pueblo and Hispanic weaving traditions.

Fall is nearly here—don't let the season slip by without taking time to experience craft! Here are 31 exhibitions, symposiums, festivals, and more happening across the country to help fill out your calendar, organized by the month in which they start.